Church of St John of Jerusalem 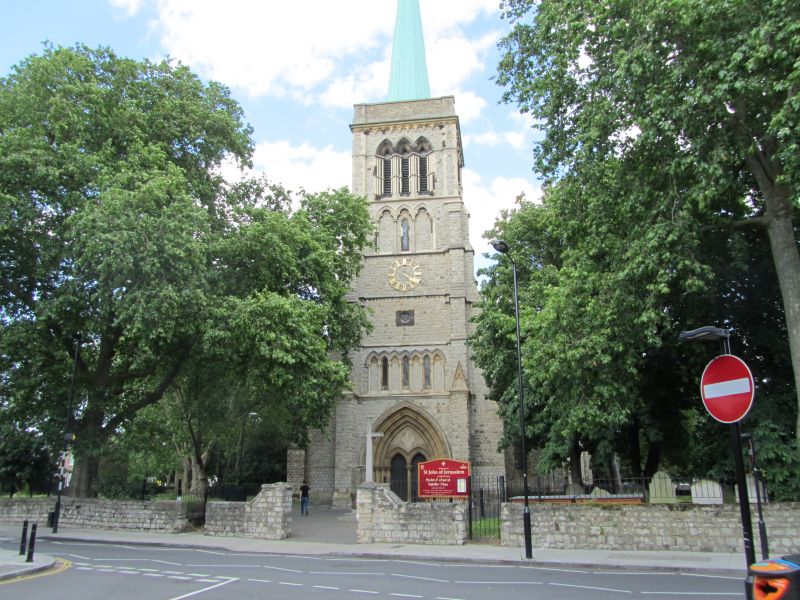 PLAN: Cruciform with a west tower and three-sided apse, small vestry to north-east.

EXTERIOR: The west tower has 4 stages. The ground floor has a large west portal (restored c.2000) which has multiple mouldings and shafts with foliage capitals and a carving of Christ Walking on the Waters in the tympanum. The second stage has 7-bay cusped arcading on the west and south facades, resembling medieval work at St Mary, Stamford although the shafts of the south façade are lost. There is then three-bay trefoiled arcading on the west, north and south facades. The top or bell stage has three lancet openings on each face. The original stone steeple was removed in 1954 and replaced by a slender copper spire by N. F. Cachemaille-Day. The nave is of six bays with flanking aisles under lean-to roofs and flying buttresses from the aisle side walls to the clerestory. There are no porches, just narrow doorways to both the north and the south with mouldings, engaged shafts and foliage capitals. The two-light clerestory windows have late C13 style tracery, with lancets in the western bays. The tall transepts rising to the height of the nave roof have four-light Geometrical windows set high up. The east end is a three-sided apse with a single lancet per bay.

INTERIOR: The church is entered through three doorways in a stone screen in the base of the tower. The large scale, height (the apex of the nave roof is nearly 20m from the ground) and consistent detail of the building creates an arresting interior with an uninterrupted vista to the east end. The walls are plastered and painted light cream. The arcades are of particular special interest in that they mix octagonal and round piers (N octagonal except for the W pier; S circular apart from the two E ones). There is also differing treatment of the capitals (varied foliage for the octagonal ones; moulded for the circular piers, except for one on the S which has foliage). There is foliate detail in the outer chamfering of the arches and which changes from bay to bay. There is also varied treatment of the clerestory (lancets in the two south-west bays; one in the north-west bay). This is an early and important example of an architect seeking to replicate the organic appearance of a medieval church. The external tracery of the two-light clerestory windows is repeated in detached form inside (modelled on Stone, Kent). The trefoiled arcading around the chancel with detached shafts is modelled, again, on Stone, Kent. There are utilitarian late C20 partitions in the ends of the transepts. The tall chancel arch has clustered shafts and Early English foliate capitals.

The nave has an arch-braced roof with broad cusping on the arches. The roof to the crossing is boarded and with thin, cusped crossing members. South transept roof is similar to that in the nave; the north transept roof has simpler detail (e.g. no cusping). Chancel roof is stone-vaulted with ribs; there is one narrow quadripartite bay before the apse. The flooring in the nave was replaced in 1893 and consists of black and white terrazzo forming polygonal patterns with lozenge borders. Ornate cast-iron grilles over the heating pipes are either side of the central east-west alley. There is Minton tiling in the chancel. The choir area has four-tile quatrefoil patterns, the sanctuary further four-tile designs.

FURNISHINGS & GLASS: Crisply-executed poppy head bench ends with varying designs survive from the original scheme but their doors have been removed. The benches at the rear have ornate, Geometrical-tracery backs and their ends have an additional buttress-like feature supporting various creatures. A similar device but with musical angels and griffons appears in the stalls: these were moved from the chancel in the 1960s to the east end of the nave (only those on the south side survive). Monuments of note include a brass tablet in a grey limestone surround to H. H. Norris, the first rector, in the north transept; there is a portrait of Norris in the south transept. The hanging rood in the chancel arch is late C20. The glass is post-war. The chancel and transept windows by Arthur Erridge, c.1950; those in the chancel have healing as a theme.

HISTORY: The church replaced a chapel of ease in Well Street of 1806-10. Both churches were built to accommodate the growing population in South Hackney as the fields between Well Street, Mare Street and Lauriston Road were laid out with houses in the first half on the C19. St John of Jerusalem originally had 1,509 seats (572 pews and 935 free seats) and is said to be the third largest parish church in London. The church was funded by public subscription and £1,000 was granted by the Church Commissioners, a government board set up in 1818 to build new churches. The area suffered bombing in WWII and the church lost its stone steeple which was replaced with a slender copper spire by N. F. Cachemaille-Day (architect to the Diocese of London in this period) after the war.

The first rector, the Rev. Henry Handley Norris, was instrumental in raising funds and commissioning the design of the new church. Norris was a leading member of the Hackney Phalanx who campaigned for more churches and church schools to be built in populous areas. Norris enjoyed a brief period of national prominence in 1812-1827 as an advisor to the Prime Minister, Lord Liverpool, on the religious affairs and the appointment of bishops. The appearance and lavishness of the church is in part Norris' creation: when Hakewill's cost estimates proved awry Norris renewed his fundraising efforts to ensure that no compromises were made in the architecture. Norris was also determined that St John should have the fittings he considered appropriate in English churches 'distinguishing them alike from the grotesque and unseemly style of furniture which often obscures the building and distracts the attention of the worshipper in Roman Catholic churches, and from the poverty and meanness of the bare walls, in those countries where the Reformation kept no such happy mean as in our own'. The church was widely praised at the time of its consecration and was analysed by The Builder and the influential Ecclesiologist publication. The latter described is as 'a striking monument ... of how soon and to what extent the Church of England has already begun in her religious structures to assert her unity with the Catholic church of ancient times'.

E.C. Hakewill came from a family of architects, studied at the Royal Academy and was a pupil of Philip Hardwick. He has several listed buildings to his name, including ten medieval churches restored by him and three C19 buildings: two churches in Clapton (not far from St John of Jerusalem) and Calverton, near Milton Keynes and a house for himself in Playford in Suffolk.

The dedication of the church is taken from a local connection with the Order of St John, the Knights Templar, who received rents on a manor nearby which was demolished in the early C19.

SUMMARY OF IMPORTANCE: The Church of St John of Jerusalem is a large and commanding church of 1845-7 by E. C. Hakewill. It is of more than special architectural interest as a fully-fledged Gothic Revival church in the Early English style with features that can be traced to the architecture of specific medieval churches. The nave arcade and tower are particularly notable in this regard. As the Ecclesiologist publication eloquently surmised at the time, the building is an exemplar of the medievalising tendencies of the C19 revival of the Church of England. The building of the church was directed by its first Rector, the Revd H. N. Norris, a man of strident views on the appearance of church buildings who, through the Hackney Phalanx, was influential in the C19 campaign for church building. This connection, remembered in the brass plaque in the north transept, adds to the special historic interest of the church.