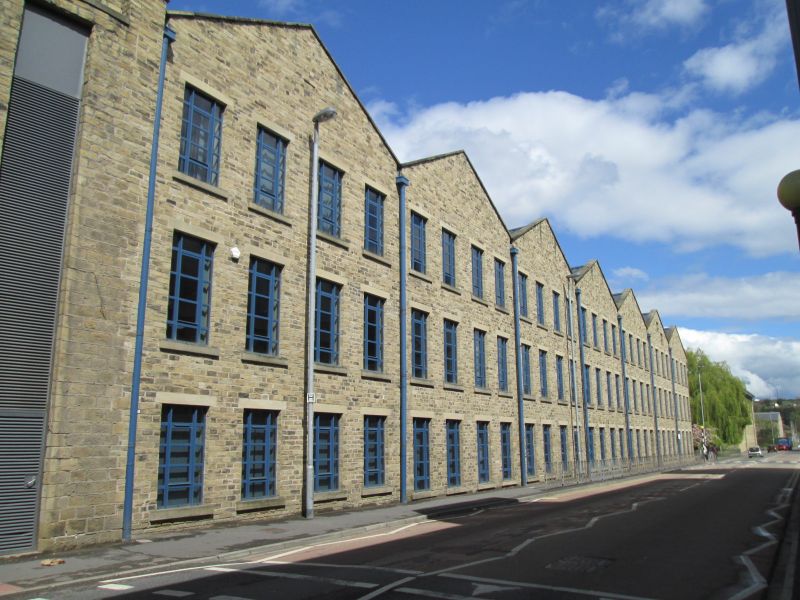 2.
Spinning mill with attached weaving sheds. Built 1865-6 for
George Brook, additions c1880 plus C20 alterations. Coursed
rubble with ashlar dressings and slate roof.
Mill building has double ridge hipped roofs with dentilated
eaves. 5 storey, 4 windows wide and 16 windows in length. Ground
and first floor windows have segment heads. All windows have
rough stone cills and lintels. Some original windows survive on
the floor on the south side, and on the first and second floors
on the north side. The south front has a stair tower, with a
taking-in door on each floor on the east front. The tower has
been extended upwards by a single floor.
Weaving sheds, to the south east, linked to the mill by a single
storey addition and a 2 storey bridge to an elevator tower. 2
storey over a basement. 9 gables with coping, the roofs stone
slate to the west and glazed to the east. North front has 35
windows with rock faced cills and lintels. Narrow east front has
single central taking-in doors to each floor, the first floor one
partly filled by a window. South, street front has 4 windows per
gable all with flush ashlar lintels and raised ashlar cills. The
second gable has a single large doorway with double panel doors
with raised ashlar surround and moulded hood. The fifth and final
gable has taking-in doors to each floor.