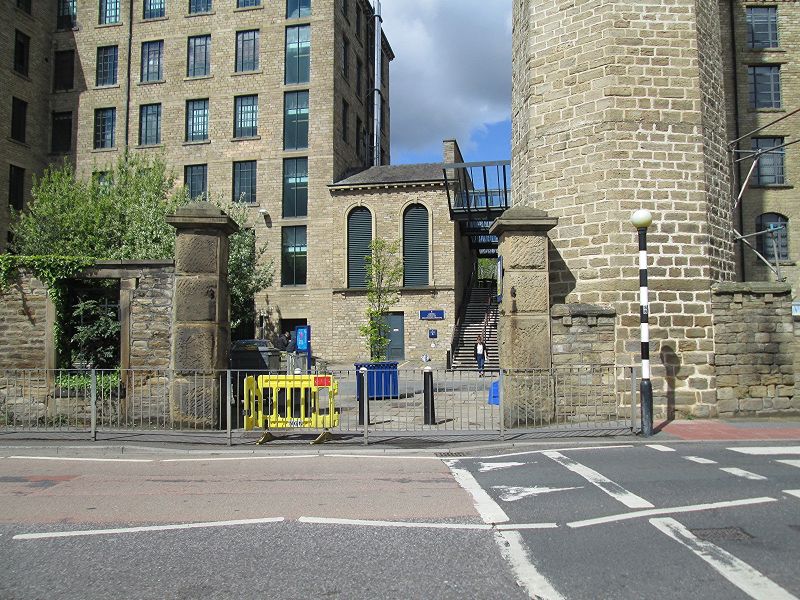 2.
Spinning mill with attached engine house, coal store, boiler
house and chimney, plus added weaving sheds. Built 1865-6 for
Benjamin Lockwood with additions 1886 for Rueben Hurst. Coursed
rubble with ashlar dressings and slate roofs.
Mill building has double ridge hipped roofs with dentilated
eaves. 6 storey. 4 windows wide and 21 windows in length, all
with flush ashlar cills and lintels, plus C20 large pane
casements. The south front has a stair tower with a single
window and a single taking-in door to each floor, plus taking-in
doors to each floor of the eastern most bay.
Engine house, to east, has a hipped roof and dentilated eaves.
The north front has a pair of tall round headed windows with
moulded ashlar surrounds and keystones.
Coal store, to east, has a single blocked doorway with flush
ashlar shouldered lintel, to the canalside.
Boiler house, to south, with ashlar coped gable. 3 storey. South
front has blocked cart entrance, with 2 blocked windows above,
and 2 farther windows above again.
Weaving sheds, to south west of the mill, single storey with 7
coped gables along the south wall, and a cart entry with plank
doors below the sixth gable.
Office block to east converted c1960 from the former time office
and cottage. Beyond to the east the main gates, with a pair of
rusticated square gate piers with pyramidal caps, and iron gates.
Chimney stack, to east, very tall hexagonal, tapering stone
stack, with decorated upper stage, and moulded cornice at top.