Church of St Mary of Eton with St Augustine 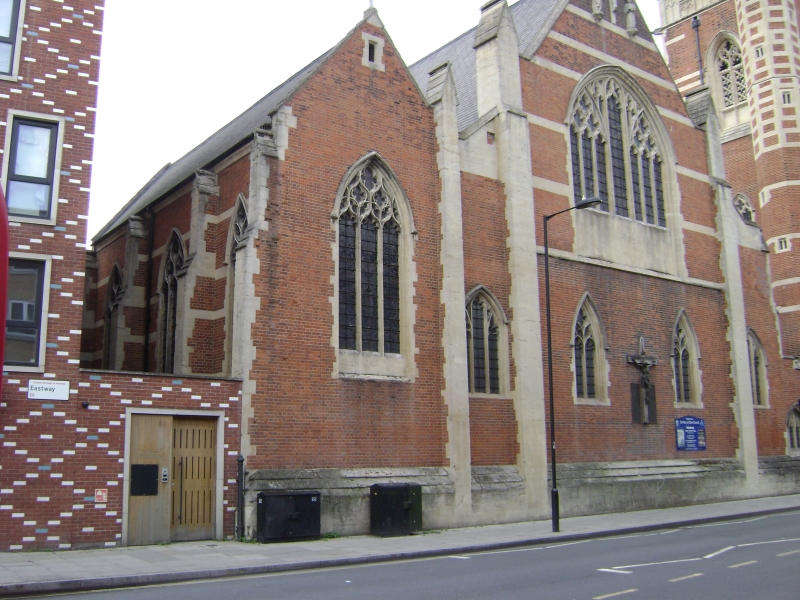 Church. Founded by the Eton College mission in 1880, the present church was built 1890-2 to the designs of George Frederick Bodley, under the title Bodley and Garner. Enlarged 1910-12 at the west end, with vestries and tower added by Cecil Hare, Bodley's successor. Red brick with Bath stone dressing; high-pitched slated roof. Decorated style with reticulated or flamboyant tracery. INTERIOR: 8-bay Nave and chancel under one wooden cradle roof, with north and south arcades on tall rectangular piers, with single chamfered outer and inner arches, the latter resting on corbels. Narrow passage aisles and ambulatory behind altar. Screen by Bodley, now at the west end; altar by W. Ellery Anderson, 1930. Lady Chapel at south-east corner with decorated ceiling. Main east window and east window of the Lady Chapel by Francis Spear, 1953. West end: font, 1891, in projecting baptistry with decorated ceiling and separated from the nave with Bodley screen. The screen is painted gold and dark green, with intricate Gothic tracery. Historical Note: The church forms the focus of the Eton College Mission founded by William How, first Bishop of Wakefield, in 1880. The Clergy and social workers, mostly old Etonians, lived in the ancillary buildings which were built 1892-1912. In 1953 the parish of St Mary's joined that of St Augustine's and the Etonian connection died out.
This church has an important place in Bodley's work, one of the last in his late group of churches and with a special function in religious and social outreach.
----------------------------------------------------------