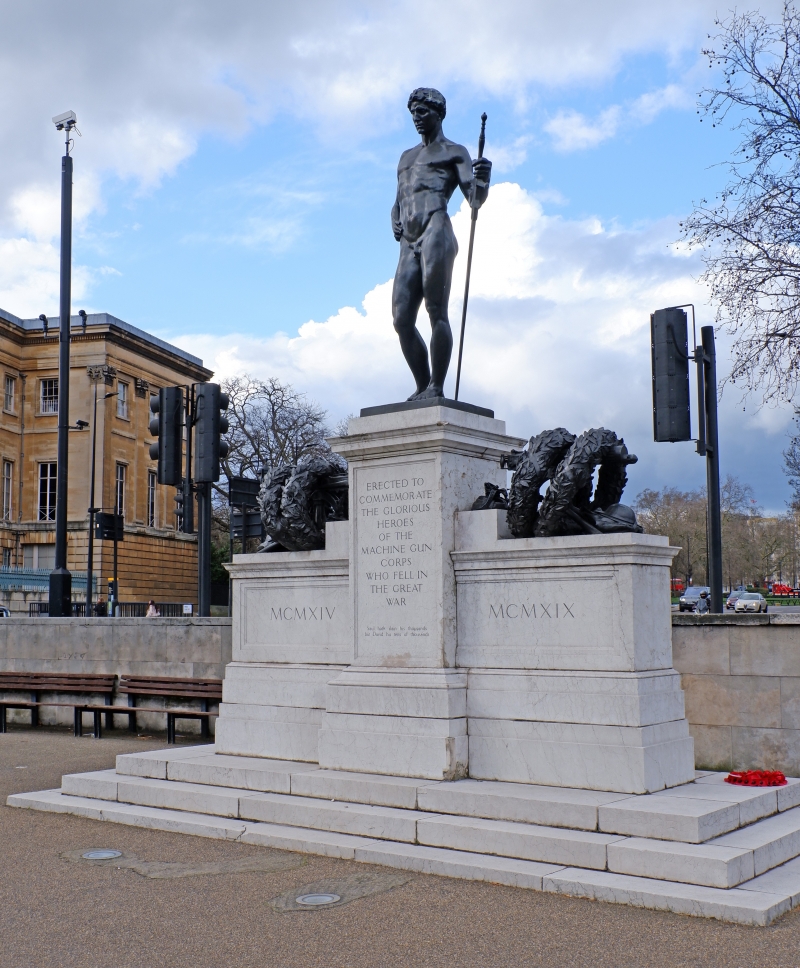 DESCRIPTION: the memorial comprises a standing naked figure holding a two-handed sword, representing David. He stands on a tall pedestal, square in section, to which are attached lower wings: on these stand Vickers machine guns, accurately depicted, each with two laurel wreaths around the gun barrel. Beneath each is a tin helmet, and a tool bag. The front of the central pedestal is inscribed “ERECTED TO / COMMEMORATE / THE GLORIOUS / HEROES / OF THE / MACHINE GUN / CORPS / WHO FELL IN / THE GREAT / WAR / Saul hath slain his thousands / but David his tens of thousands”. On the reverse of the memorial is a lengthy inscription setting out the history of the unit, and its casualties.

This memorial was unveiled on 10 May 1925 by the Duke of Connaught. It commemorates the 15,552 fatalities suffered by the Machine Gun Corps (MCG) from its raising in October 1915 until its disbanding in July 1922. Its front-line exposure to danger won it the nickname of ‘The Suicide Club’. At the start of war, the British Army was lightly equipped with this weapon (which effectively dated from Sir Hiram Maxim’s machine gun design of 1884), but numbers increased rapidly as its effectiveness became apparent, leading to the foundation of the MGC. The Vickers machine guns depicted here were patented in 1912. According to some sources, the depictions here were actual examples of machine gun, covered in bronze: however, they appear to be carefully prepared replicas.

This unusual memorial celebrates human beauty and the vulnerability of flesh; the juxtaposition with two fearsome weapons, and a biblical inscription extolling body counts, is still powerful. The monument originally stood on a small traffic island to the south of the Royal Artillery Memorial; dismantled after 1945 it was installed in its present position in 1962. A reduced version of Wood’s figure formed another war memorial, in Cheyne Walk, Chelsea: this was stolen in 1969. Another version of the David statue is held by the National Gallery of Victoria, Melbourne, Australia.
Francis Derwent Wood RA (1871-1926), a prominent exponent of the New Sculpture, was best-known for his mythological figural works and portrait sculpture, steeped in classical and Renaissance inspirations. During the First World War he worked in a London hospital, creating prosthetic masks for disfigured ex-servicemen to wear in order to disguise their wounds. No stranger, therefore, to the brutal impact of war, his 1919 statue ‘Canada’s Golgotha’ had to be withdrawn from the Royal Academy following complaints from the German Ambassador about its portrayal of an alleged atrocity. Opinions remain divided about the appropriateness of a naked statue beside machine guns, and of the biblical text. It remains a challenging memorial, very much of its day in its aestheticism deployed to serve military remembrance, but still capable of prompting reflection on the pathos of war and its modern mechanical reality.

The Machine Gun Corps Memorial is listed at Grade II* for the following principal reasons:
* Historic interest: the memorial is of clear note as a tribute to a specific branch of the armed services, and its minute depiction of machine guns shows the importance of this relatively new weapon in contemporary warfare. The inscription is a bleak reflection in its deadly effectiveness;
* Commemorative interest: its unusual juxtaposition of classical beauty with military hardware is expressive of commemorative approaches in the 1920s, as designers sought to combine the actuality of combat with the humanist traditions of sculpted memorials;
* Sculptural interest: Derwent Wood was a sculptor of considerable renown, and his figure of David embodies his aesthetic approach to modelling, and his indebtedness to classicism and Renaissance sculpture;
* Group Value: the memorial is situated close to Apsley House, and to a number of other notable military memorials. It forms an interesting contrast to the nearby Royal Artillery Memorial, another monument devoted to a specific branch of the Army, which also prominently features its weapons.