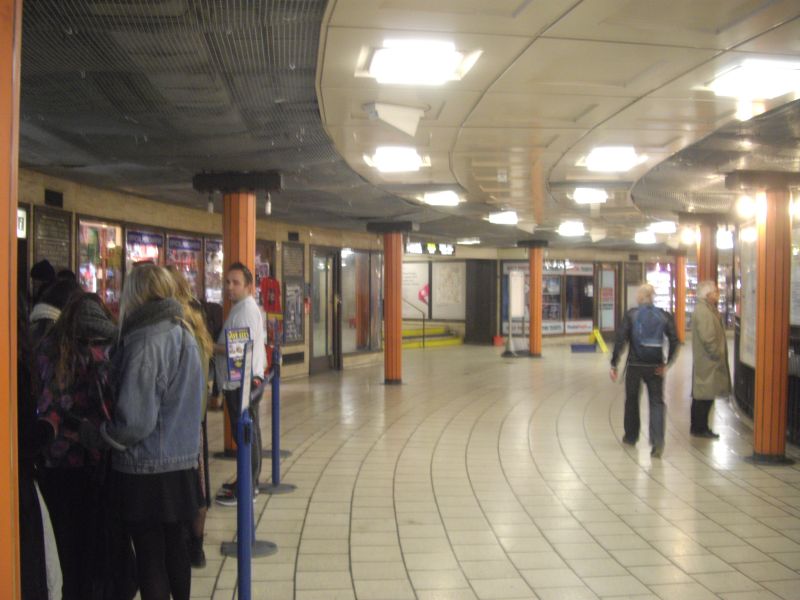 Underground railway station, 1925-8 rebuilding of the original Leslie Green station of 1906 by Charles Holden. Renovated in the 1980s.

Underground railway station, 1925-8 rebuilding of the original Leslie Green station of 1906 by Charles Holden. Renovated in the 1980s.

MATERIALS: reinforced concrete, the concourse areas and access subways clad in cream travertine marble. The subway entrances on the pavement have granite kerbs and are framed by bronzed Neo-Roman railings with fish-scale mouldings, turned balusters and ball finials, with panelled bronze lamp standards that have polygonal finialed bronzed-cased lamps, supporting an illuminated London Transport emblem. Bronze metalwork throughout, one of its earliest uses at London Underground stations.
PLAN: subsurface elliptical ticket hall reached by four subway entrances irregularly spaced round the circumference providing seven separate entrances. An escalator shaft leads to a lower concourse with tunnels to the four platforms.

CENTRAL CONCOURSE: this main space is circular, with access to platforms from an escalator hall placed in the middle, and the subways leading off the ambulatory. Travertine-lined walls, with shallow cornice moulding. The interior space here is defined by Holden's modern interpretation of the Neo-Roman style. Two lines of 12-sided columns, originally maroon scagliola, now painted orange, with vertical brass filets and fluted rectangular bronze capitals incorporating hanging lantern fittings. Original directional signs incorporated in the walls, over bronze panels. Shop-fronts, original but with later alterations, and shallow display cases round the circumference of the concourse have bronze framed glass panels. Particularly handsome are the shop-fronts in the centre of the drum, set behind an inner row of columns and with fluted bottom panel. All the shop interiors (*) have lost their original fittings and lack special interest. Around the perimeter are areas with original sans-serif lettering identifying areas of PHOTOGRAPHS, PUBLIC TELEPHONES, and TICKET MACHINES; all the equipment, however, is modern (*). A feature of the central drum is a map of the world's time-zones set within an oak frame and with an illuminated panel ‘The world time today’. The ceiling throughout, originally of coffered fibrous plaster panels, has been replaced with enamelled metal echoing the original design. The floor tiles are mostly as original, laid concentrically, with some areas carefully replaced and retaining the angled pointing. Steps to a basement plant room follow the curve of the inner drum with bronze railings (partly enclosed with later cast-iron security grille (*)).
The travertine-lined concourse extends to the top of the escalator shafts, with three fluted columns, the central column bearing clocks on two of its faces. The station control room between the two sets of escalators has bronze-framed windows to three sides. A panel records the opening of the station by the Mayor of Westminster, Vivian B. Rogers, on 10 December 1928. An opposite panel records the station re-opening after the 1989 modernisation. The travertine stops at floor level over the top of the escalators. The office and service spaces beyond the public areas are not of special interest (*).
LOWER LEVELS: the escalator shaft (and escalators), lower concourse, passages and platforms have been re-tiled and refitted and retain no features of special interest (*).
SUBWAYS: there are four numbered subways leading from the perimeter of the central concourse to the above ground entrances. These are all lined with travertine; that in Subway No.1 has been renewed and laid vertically. The other subways retain many original features.
Subway No.1 leads to Regent Street (East). Ladies’ toilet has no features of special interest (*). The street level entrance is set within the open portico of No. 50 Regent Street (listed separately at Grade II), and the upper level of the steps is faced with Portland Stone (instead of travertine) to match it. Neo-Roman railings at top continue to form gates.
Subway No.2, leading to Regent Street (West) and Piccadilly (North), forms a wide western passage off the central concourse, similarly lined with travertine walls, bronze framed poster panels and display cases (some now converted to ATM use (*)) directional signs to "TRAINS", with three feathers. The passage terminates in a modern subterranean shop-front (*), flanked by six-facet quadrant shop-fronts with bronze frames to glass, one to each side with a door, and grey terrazzo plinths (beyond this the shop at Nos. 49-63 Regent Street is separately listed). Travertine lining extends to the inner door of a late-C20 shop with modern plastic fascia (*). On either side of this are the steps up to the subway entrances.
Subway No.3, with steps up to Lower Regent St./Eros and L-shaped passage to Piccadilly (South). Travertine-lined walls with a central travertine-lined square column, and bronze poster-boards. Street level as above with particularly deep granite kerb.
Subway No.4, with passage to steps leading up to Shaftsbury Avenue has travertine-lined walls and bronze poster-boards inset in niches. The Gentleman’s toilet and intrusive modern shop-front to ‘Trocadero’ with replaced flooring (beyond this the building at Nos.1-7 Piccadilly Circus is separately listed) are not of special interest (*). Geometric grilles to wall vent near entrance from concourse and at base of steps.
EXTERIOR: the only parts of the station visible above ground are the seven subway entrances (including one beneath the portico of the Grade II listed former County Fire Office on the corner of Glasshouse Street), distinguished by decorative railings, lamp standards and lighted signage (described above and included within the listing).
* Pursuant to s.1 (5A) of the Planning (Listed Buildings and Conservation Areas) Act 1990 (the Act’) it is declared that these aforementioned features (*) are not of special architectural or historic interest.

Piccadilly Circus Station was first opened in March 1906 by the Baker Street and Waterloo Railway (now the Bakerloo line) with the platforms of the Great Northern, Piccadilly and Brompton Railway (now the Piccadilly line) being opened on 15 December 1906. Originally it had a surface station building on the south side of the Circus designed by Leslie Green and financed by the American tycoon Charles Yerkes, who together were responsible for about forty stations. This was the only one to have three independent facades, these with glazed terracotta blocks and Baroque detailing.

By the 1920s however, the station and its eight lifts were unable to handle the passenger traffic, which had increased from 1.5 to 25 million per year. It was decided to follow the same arrangement as at Bank (1924-5) - a circular subsurface concourse scheme - with an elliptical ticket hall following the shape of Piccadilly Circus itself. Adams, Holden and Pearson were consulting architects and the resulting design was strongly influenced by Holden’s modernist style that would define the northern and western extensions of the Piccadilly Line in the following decade. Construction began in 1925, requiring complex tunnelling and a reinforced concrete roof supported on seven steel columns at the centre of the ellipse (with a further 50 columns arranged as a double colonnade around the ticket hall) to support the road only nine feet (2.74m) above. As the jewel in the crown of the Underground the decorative materials used were of the highest standard. The new station cost £500,000, was opened on 10th December 1928, and the following year the original station closed. Fluorescent tube lights were introduced at platform level in October 1945 (the first Underground station to have them). The platform, lower concourse and escalator areas were refurbished in 1984-6 with new platform tiling. The ticket hall was restored in 1989. Three original entrances remained in use until demolition in 1990. Holden’s concourse design was well received by the architectural press, being highly influential and providing a particular inspiration for the Moscow Metro system.

Piccadilly Circus Underground Station, substantially modernised in 1925-8 to the designs of Charles Holden, is listed at Grade II for the following principal reasons:
* Architectural and planning interest: Piccadilly Circus demonstrated a new approach to clear planning in a clean, modern idiom displaying Holden's distinctive and richly detailed early-C20 neo-Classicism. It was highly influential at the time and provided inspiration for the Moscow Metro system;
* Engineering interest: as a major feat of transport engineering beneath one of London’s most iconic urban spaces, built to accommodate vast numbers of travellers;
* Historic importance; as the first in a series of updated stations on the London Underground Piccadilly line designed by this notable C20 architect.