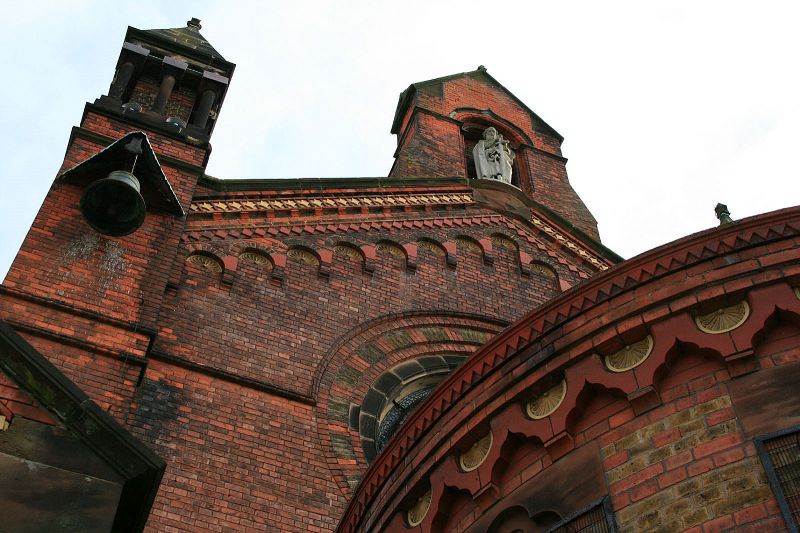 GEDLING CHURCH STREET
SK 64 SW
Carlton
(south side)
7/49 Church of St. Paul
G.V. II
Parish church. 1885 and 1891. Designed by W. A. Coombs for the
4th Earl of Carnarvon. Red brick with gabled, hipped and conical
slate roofs. Romanesque Basilica style. Ashlar and yellow
terra-cotta dressings. Chamfered plinth, pilasters, string
courses, lintel band, moulded and cogged eaves, coped gables,
rainwater heads dated 1884 and 1891. Windows are leaded double
and triple round headed lancets with round shafts. Nave
with clerestory,north and south aisles, north and south porches,
apsidal baptistry, organ chamber, vestry, chancel, apsidal
sanctuary. Nave has coped east gable with cross. Clerestory has
on each side 6 double lancets. West end has moulded round window
and ornamented gable with shouldered gabled bell turret with
niche containing figure. flanked by single square buttresses,
each with shafted dummy turret with pyramid roof. Left buttress
has bell on bracket with copper hood. North and south aisles have
each 6 lancets. Similar north and south porches have to west, a
pair of doors in round headed openings. Each has 2 round windows
in its side. Apsidal baptistry has 5 lancets. Flanked by single
lancets under lean-to roofs. Square organ chamber has to north 5
bay blind arcade containing 2 lancets. East side has similar
arcade with single lancet. Square choir vestry has in west
return angle hipped porch with round window and door. To south,
a lancet and to right, lean-to porch with door and round window.
East side has 3 lancets. Chancel has, above, 2 round windows
each side. Apsidal sanctuary has Slancets separated by half-
round pilasters. Nave has cogged and dentillated sill band and
moulded clerestory lintel band. Moulded queen post roof on
timber and brick corbels. 6 bay arcades with round ashlar piers
and polychrome round brick arches with hood moulds. West end has
moulded round arch flanked by single smaller arches. Aisles have
moulded window openings and lean-to roofs on corbels. North
aisle has to east, round arched organ opening. South aisle has
to east, panelled wood enclosure with triptych and broken
pediment, forming chapel and vestry, 1896 and 1953. Polychrome
chancel arch has shaft responds. Chancel has balustraded marble
screen wall, 1912, with central half round steps. Lintel and
sill bands and barrel vaulted king post roof. North side has
archway containing organ. South side has similar arch containing
2 bay arcade. Domed sanctuary has to north, round headed aumbry
and to south, round headed double sedilia. Above, 5 windows, 3
with stained glass, 1933 and 1947. Fittings include square font
on clustered round stem. Carved wood altar and gradine.
Panelled oak stalls and desks carved by Eric Gill, 1903.
Scrolled brass lectern on bracketed marble steps and stand. C19
benches. Chamfered oak pulpit, C20. Memorials include 2 war
memorial tablets, c.1920.