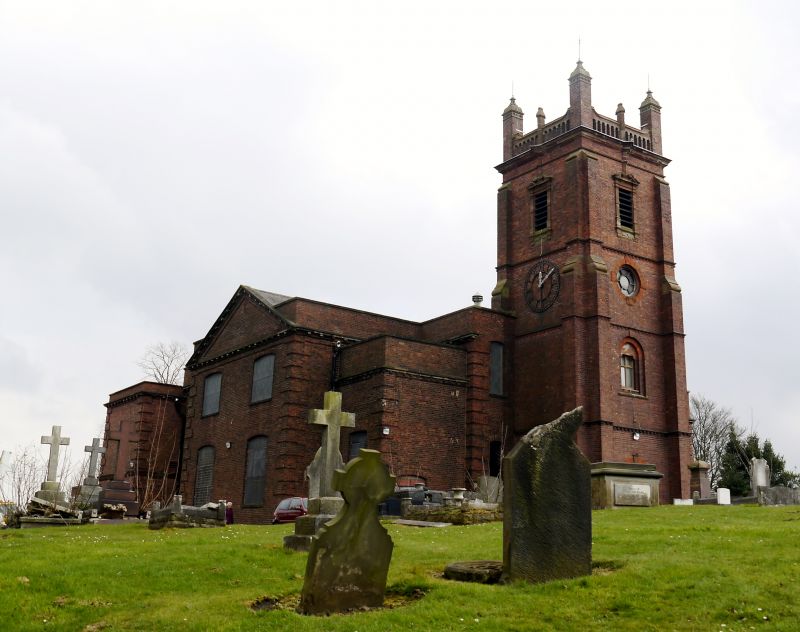 Town church, Anglican, sited in an elevated position in the centre of Brierley Hill in a large churchyard. Classical 1765 core with alterations of 1823 and 1837, and restoration of 1873-88. In 1900 the sanctuary was added, and the tower re-cased and redesigned, both in a sympathetic style to the original. Further re-ordering in 1994.
MATERIALS: Constructed of red brick with rusticated quoins and rubbed brick and sandstone dressings. The roof covering is slate.
PLAN: The church comprises the west tower/porch, a nave that is galleried on three sides; wide, shallow north and south transepts, chancel, and south east vestry. The former choir vestry has been converted to a kitchen, and the area below the north gallery was screened off in 1994.
EXTERIOR: The main body of the church has a plain brick parapet above a dentil cornice, pedimented gables to the transepts and sanctuary, and large segmental-headed windows. There is a triple round-headed window to the sanctuary, which has curved corners at the abutment with the choir. The west tower is of four stages, each defined by stone cornices with dentil friezes, and it has angle buttresses with set-offs. The tower has a pierced stone parapet and large square-section pinnacles above a deep stone cornice. The round-headed west doorway has two orders of rubbed brick arches; a round-headed window above, that also has a rubbed brick arch; and a shoulder-headed opening with the inscription 'built 1765 restored 1900'. There is an oculus window above with a rubbed brick surround and the belfry windows have stone architraves and swan-necked pediments.
INTERIOR: Painted and plastered. The round-headed chancel arch has a panelled soffit carried on Ionic columns with an entablature and there is a matching sanctuary arch. There are painted roundels set in stone frames to either side of the chancel arch. The galleries are carried on Tuscan columns with a gallery arcade of Ionic columns with round-headed arches with panelled soffits. The gallery front is canted forward in each bay with a splat balustrade. There are cornices to the ceilings and the nave ceiling has two ornamental round ventilators.
FITTINGS: There is a timber reredos with a moulded timber frame, rising in the centre and filled with blind-round arches, and a timber panelled dado to the sanctuary. The choir stalls have square-headed panelled ends, the frontal with lattice decoration. The stone drum pulpit has a moulded cornice and round-headed arcading on alabaster shafts; cylindrical stem. The pulpit has a memorial date of 1900 and the font, also of circa 1900, has a chalice-shaped bowl carved with classical motifs and four Ionic alabaster corner shafts to the cylindrical stem. Nave benches have shouldered, shaped ends. Part of the area under the south gallery is screened off with a 1930s classical timber screen with round-headed arches, formerly defining a north east chapel. Stained glass mostly of the early C20. Glazed screen of 1995 to the area under the north gallery.

HISTORY: St Michael's Church was erected by public subscription, as a chapel of ease, in about 1765. Following the rapid growth of the town the original chapel was considered too small and was enlarged in 1823 with the addition of transepts. It was again enlarged in 1837 and extensive alterations and restoration were carried out in the 1880s. The church was largely rebuilt in 1900 when the chancel was extended and the tower strengthened and re-cased in new brick, but it retains a classical core. In 1994 the interior underwent further restoration and re-ordering, including the conversion of the north aisle into side rooms and the re-siting of wooden panelling to the opposite side of the building.

REASON FOR DECISION: The Church of St Michael is listed at Grade II for the following principal reasons:
* A good example of a multi-period church with classical styling present throughout
* It has a well-designed and intact C19 interior with some quality carpentry, fixtures and fittings
* Its striking and elevated location has considerable townscape value in Brierley Hill and makes a significant contribution to the conservation area