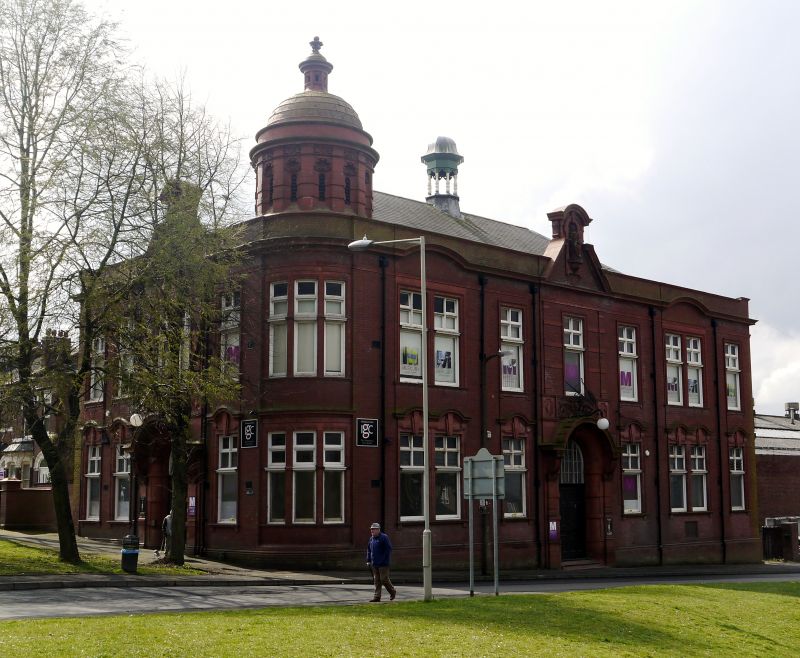 A Carnegie library and technical institute of 1903-4, designed by the borough surveyor to Brierley Hill, Lewis Harper and built by CA Horton.

MATERIALS: brick, with terracotta dressings, both produced by the Ketley Brick Company, with a hipped, blue slate roof.

PLAN: the building has two principal storeys with an attic and basement. The library was originally housed at ground floor level, with the technical institute on the first floor, approached by a richly decorated staircase.

EXTERIOR: the building fronts onto Moor Street and Bell Street, with a quadrant corner which rises to a cupola at attic level. The Bell Street front has five bays, with the quadrant at left. All the windows have plate glass to their lower bodies and cross windows above. All have projecting surrounds of moulded terracotta and those to the ground floor have triple keystones which rise to meet projecting arched hoods. The central bay contains the library entrance which has a frontispiece with double panelled doors at ground floor level, below an arched hood supported on brackets with banded Ionic pilasters. The words ‘PUBLIC LIBRARY’ are in profile, around the fanlight. Above this the first floor has paired windows, below which a panel of rich foliate ornament forms an apron. At either side are banded Tuscan pilasters with panelled bases. Above the doorway a wrought iron bracket with stay rods holds a globe lamp. A gablet projects above the parapet on this bay and holds a niche, containing a figure moulded by Arthur Gibbons which holds a book in her left hand and a shield with the word ‘LIBRI’ in relief.

The Moor Street front is nearly symmetrical, with seven bays, of which the quadrant bay is to the left. The second and sixth bays have paired windows and the string course at the top of the wall projects upwards into the parapet above each of these bays. The doorway to the institute at centre is similar to that on Bell Street, save that it has a single window to the first floor and the figure in the gablet niche, which was moulded by Albert Oakden, is identified as ‘ART’ on her shield. The relief lettering above the door reads ‘TECHNICAL INSTITUTE’. A granite foundation stone below the sixth bay records the architect, builder and date. The quadrant corner bay has a window of three lights to each floor and the cupola has a series of arched lancet windows with shell heads, divided by banded pilasters. The stepped, terracotta dome rises to a lantern and finial. To the centre of the hipped roof is a further, smaller cupola with arched wooden body and domed lead roof.

INTERIOR: the entrance lobby to the library has polychromatic tiling below the dado of richly architectural form, with paired Ionic pilasters at either side of panels of foliage and fruit. The dado panel has fluted ornament with cabling. A brass plaque records ‘THIS PUBLIC LIBRARY / WAS ERECTED BY / THE MUNIFICENCE / OF / ANDREW CARNEGIE ESQ. L.L.D. / OF SKIBO CASTLE. N.B. / OPENED / 15TH FEBRUARY 1904.’. The library rooms have suspended ceilings, but the deep ceiling cornice can be seen above these. Some window panes have etched and cut glass decoration. The technical institute has terrazzo flooring to the entrance hall and a dogleg staircase with cantilevered stone treads. The balustrade is of wrought iron with a wooden handrail. To the walls of both hall and staircase is a deep dado frieze of green tiles with a trellis design and the half landing has an arched window with panels of stained glass, including a panel representing the Fine Arts.

The Technical Institute and Library was designed to accommodate the two functions of a public, free library and a technical institute to train the many apprentices in the local glass industry. Andrew Carnegie gave £2,000 towards the library building in 1901 and the rest of the cost was borne by Brierley Hill Urban District Council. The foundation stone was laid in April 1903, and the building opened in 1904. The design was by Lewis Harper, who was borough surveyor, and the builder was CA Horton. The brick and terracotta used were locally produced by the Ketley Brick Company, and the sculptures of Learning and Art were modelled by Arthur Gibbons and Albert Oakden who were, respectively, headmaster and assistant of the School of Art. The teaching in the school encompassed fine art and the skills of glass cutting and cameo etching.
In the mid-C20 the library appears to have moved from the building and an extension was added to the rear yard, housing a row of glass furnaces. Despite this, the majority of the original external wall of the building was retained, including window openings.
The building continued to operate as a technical institute for the glass industry throughout the C20 and is now (2011) a ‘Heritage College’.

The former Technical Institute and Public Library, Moor Street, Brierley Hill is designated at Grade II for the following principal reasons:
* Architectural Interest: the building's design uses Renaissance motifs with skill on its exterior and has detailing which is well-considered to the interior, including notable tile;
* Completeness: original details, such as fenestration, tiling and stained glass survive, as does much of the original plan for the building;
* Context: the building clearly combines, in its appearance and planning, the functions of a library and a technical institute for the skilled apprentices who were formerly employed in the glass industry in Brierley Hill.