A Grade I Listed Building in Todmorden, Calderdale 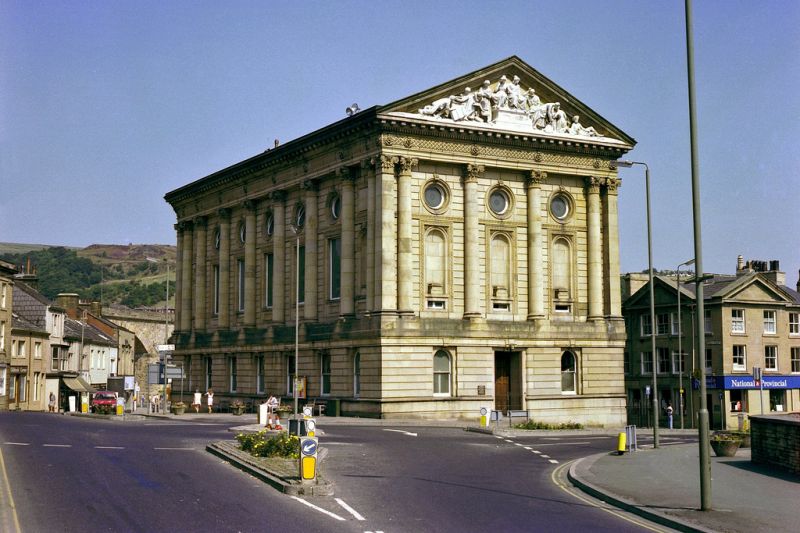 Town Hall. Opened 3rd April, 1875 by the Postmaster General, Lord John Manners.
By John Gibson for Samuel, John and Joshua Fielden. Sandstone ashlar, lead
roof. Classical. In form an apsidal temple raised on a high basement. The
basement has banded rustication and the upper walls are also slightly
Channelled. Plinth, stylobat and ¾ unfluted Composite columns supporting
elaborate entablature which has a fretted pulvinated frieze enriched by
rosettes. The front is of 3 bays, and the return wall of 7. Terminated in each
case by clasping pilasters. The apse is stepped in slightly and is similarly
treated, except that the columns are detached and have cabled surface. The tall
1st floor has, at the front, round headed windows and richly carved surround,
and at the sides similar straight headed windows, all surmounted by circular
windows. Set within the tympanum of the deeply moulded triangular pediment
impressive statuary. 2 central female figures linked in friendship are seated
on a pedestal inscribed 'LANCASHIRE/YORKSHIRE'. To either side groups depicting
the Lancashire cotton industry and the engineering and agriculture of Yorkshire.
Interior: Semi-circular entrance hall with Tuscan columns and pilasters. Set
between is marble bust of John Fielden M.P. (1784-1849) by Thomas Campbell,
1850. 2 other balancing sculptures, one of Ruth another of Flight of Pompey.
both by G. D. Benzoni, (Rome, 1878). These are set at the foot of Imperial
staircase with elaborate cast-iron balustrade, the open-string risers covered by
linking figures. At head of stair, painting of Thomas Fielden. Memorial tablet
to Sir John Cockcroft (1897-1967), Nobel Prize winner. Large 1st floor hall
with modillion cornice. Coved fretted cornice with medallions. Ceiling divided
into 3 panels with large circular sun motif with pendant bosses. 3 large
medallions set to rear of stage. Under hall are court chambers with oak-
panelled horse-shoe inner chamber and dais with canopied chair. The foundations
of an earlier hall by Mr. Green were laid in the early 1860's. In 1866 the
Fieldens purchased the partial constructed hall. Constrained by the site Gibson
produced a building of concentrated richness and great assurance unusual in this
style at that period. One of the finest town halls in West Yorkshire.
Illustrated in D. Linstrum, West Yorkshire Architects and Architecture, (London,
1978), p.353. N. Pevsner, Yorkshire West Riding, (London, 1979), p.522.