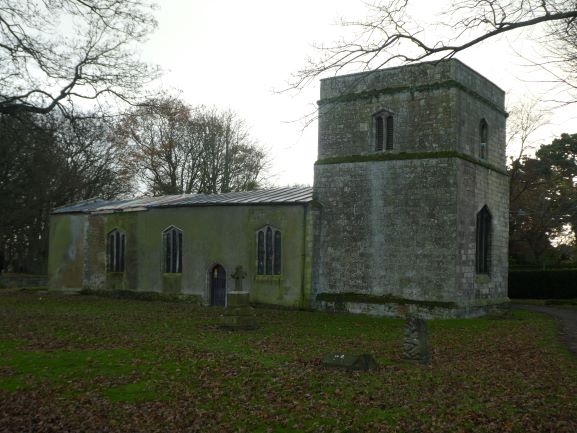 II*
DATES OF MAIN PHASES/ NAMES OF ARCHITECTS:
Tower possibly C13, but a mid C16 date seems likelier. Nave and chancel probably mid C16 with significant C18 brick repairs. Restored in 1884 by James Fowler, and again in the C20.
MATERIALS:
A mix of material, including ashlar, stone rubble and brick. Externally partly rendered. Lead roofs, with tile to the porch.

EXTERIOR:
A low church with a shallow pitched roof and no aisles or clerestory. The nave and chancel are mostly rendered, but the underlying masonry, a mix of brick, rubble and ashlar, is exposed in places. The chancel is distinguished from the nave by a slight set back in the walls. Three 3-light C16 windows with uncusped lights and a C16 door with two continuous chamfered mouldings in the nave S wall. The N side has similar C16 windows and there are matching windows in the chancel N and E faces only. A single, possibly re-set, grotesque head in the apex of the E gable. The lower part of the N porch is coursed rubble masonry, but the upper part has been rebuilt in C18 brick and has a tumbled brick gable. There are also substantial brick repairs to the N side of the nave. Some irregularities in the plinth at the E end suggest that the E wall may have been rebuilt at an unknown date.

Short, unbuttressed W tower of two stages with a shallow plinth and plain parapet, all of dressed ashlar. Simple, 2-light C16 windows in the bell stage and a 3-light W window like those in the body of the church in the lower stage, all of which appear to course in with the ashlar facing, suggesting a C16 date for the tower.

INTERIOR:
A plain, box-like interior. The interior walls of the nave are painted but unplastered and show a wide variety of stone types and forms including pebbles and dressed stone blocks, including some obviously re-used masonry. The chancel is rendered and painted. Undivided nave and chancel, the chancel narrower than the nave and the division marked by a change in the roof structure. Wide tower arch of unusual, possibly C16, form. Three chamfered orders, the inner on attached shafts, the outer two on simple, polygonal shafts. Unusual moulded capitals, the upper part chamfered back from an impost to meet the orders above. Tower arch closed by a C19 or early C20 timber screen.

Plain nave roof is probably C16, shallow pitched with chamfered tie beams. Chancel roof of uncertain, possibly also C16 date, has roll moulded rafters and purlins with fleuron bosses. C19 inscription on the wall plate and C20 paint on all but the ridge.

PRINCIPAL FIXTURES:
Good, polygonal, Perpendicular font, the bowl with quatrefoils with Kentish cusps, the stem also traceried with Kentish cusped quatrefoils and possibly cut down at the base. C19 pulpit, lectern and panelling in the chancel.
Two interesting C18 wall slabs to members of the Chapman family, including lists of their numerous offspring, on either side of the E window and several C19 and C20 wall tablets. Some good C19 and C20 stained glass.

HISTORY:
A church dedicated to St Clement is recorded in Skegness in the C13. Writing in the C16, Leland noted that that most of Skegness had been washed away by the sea in 1526 but that part of a church remained. Later C16 and C17 sources also suggest that the church was destroyed, and materials were salvaged to rebuild the church on a different site. The architectural evidence supports this, both the tower and the body of the church seem to be a single, C16 build incorporating considerable amounts of re-used stone. The church was restored in the C19, but fell into disrepair in the late C19 after St Matthew's church was opened in the new town centre. It was closed for a period in the early C20, and restored in the 1930s.

REASONS FOR DESIGNATION:
The church of St Clement, Skegness is designated at Grade II* for the following principal reasons:
* A rare survival of an apparently wholly mid C16 church, rebuilt on a new site after an older church was destroyed by flooding in 1526.
* Fine perpendicular font.
* Some good C19 and C20 stained glass.