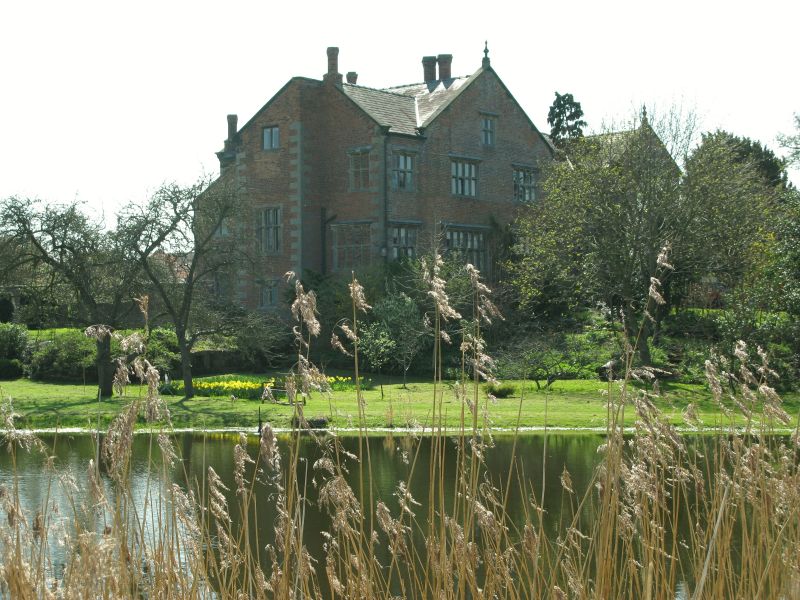 Manor house: early Cl7 for Sir Richard Bostock, interior altered 1858
for Robert Barbour. English garden wall bond orange brick with buff
sandstone dressings. Welsh slate roof, 1 lateral brick chimney and 3
brick ridge chimneys with diamond stacks. H-shaped plan. 2 and
3-storey, 5-bay front. Moulded stone plinth, stone quoins and
stone-coped gables on kneelers with turned finials. Right end bay
projects under gable and has a 6-light ovolo-moulded mullioned and
transomed window divided by a king mullion and under a hood mould,
below; similar 4-light above under a flat hood and a 4-light in the
gable. BB CE 1712 graffito on a quoin. 4th bay is recessed with
similar 6-light window to hall below and a 2 and 4-light mullioned and
transomed window above. Remaining 3 bays project under a gable. The
plinth is stepped and there is a mixture of 2, 3, 4 and 6-light
mullioned and transomed windows. To right side of this projection is
a moulded stone doorcase with a mid C19 restored studded oak board
door. Fenestration and doorcases complete, though some blocked, on
remaining sides.
Interior: Plan of service rooms, simple cross-passage, hall and
extensive solar wing intact but fittings nearly all of 1858. Some
Jacobean panelled window seats and wainscotting, (all re-used for
doors). Passage has an original strapwork and figured iron grille in
ceiling and service rooms have bead-moulded beams.

On documentary evidence the house was constructed before 1622 making
it an early and complete example of a brick building in Cheshire.