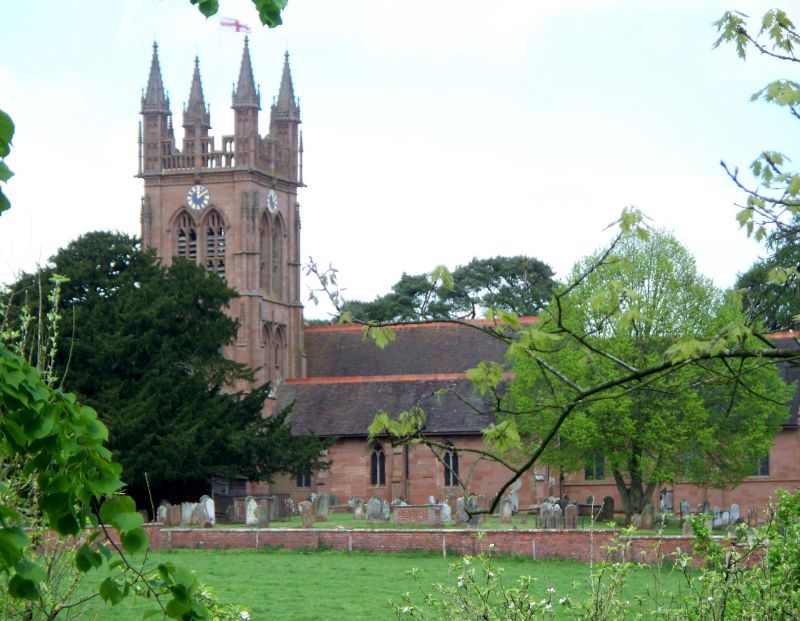 S.W. tower: 1872-4, three stages with angle buttresses, foliated frieze below a castellated openwork parapet. The parapet has corner pinnacles with crocketed spirelets, and an hexagonal finial in the centre of each face and at each corners. South door with colonettes, panelled spandrels and returned hood mould, two-light window above with cinquefoil headed lights, separated by a niche with crocketed nodding ogee canopy. The second and third stages have paired pointed and transomed windows each of two trefoil headed lights with early Perpendicular style tracery.

Interior: early C12 south arcade; cylindrical columns with square abaci and squat mult-scalloped capitals, semi-circular single step arches (c.f. Church of The Holy Cross (q.v.) Bobbington C.P.). The west arch is blocked by the tower. In two of the arcade spandrels are set C12 figure sculptures; one is a bishop with his left hand clutching a crozier and his right hand raised in blessing, the other is a priest with his right hand raised in blessing and his left hand holding a fan. Early C13 north arcade, the details recut in 1872-4; cylindrical columns with round abaci and capitals with incised decoration; semi-circular arches of two chamfered orders. Pointed west annexe arch of 1872-4. C14 pointed chancel arch of 2 chamfered orders springing from engaged semi-octagonal columns with moulded capitals. At the east end of the south aisle a water stoup, and, at the level of the arches, a blocked door which-probably communicated with a former rood loft. In the chancel a pointed moulded arch to the organ chamber. On the north side of the sanctuary a C19 wall cupboard with ogee head and ballflower ornament; C19 sedilia and piscina on the south side, pointed arches and continuous hood mould; the piscina has a double basin. C19 arch-braced collar roof over west annexe; arch-braced collar roof over nave, probably C14; C14 or C15 arch braced collar roof over south aisle, one pair of moulded and coupled purlins, cusped wind braces; north aisle has a braced collar rafter roof probably C14; C19 collar rafter roof over chancel, every third collar is arch braced, the others have straight braces.

Fittings: C19 stone font, octagonal basin on a cylindrical marble shafted pedestal. C19 octagonal pulpit, wood on stone base. Three brass chandeliers in the nave and one in the chancel. Late C15 stalls with carved bench ends and four misericords: Sir Ywain at the castle gate, a couple in a pew, two dogs attacking a bear, a seated angel under a canopy. C19 wooden communion rail on shafted open arcade.

Monuments. Chancel: C13 recumbent effigy of a priest in a recess on the north side of the sanctuary. South aisle: Sir Thomas Grey (died 1559) and his wife and children; alabaster chest tomb with two recumbent effigies, Sir Thomas in plate armour with his head on a tilting helm and his feet on a lion, children around the sides. Harry Grey, Earl of Stamford (died 1768), tablet surmounted by an obelisk and urn. Dorothy Grey, daughter of the third Earl of Stamford, tablet with pedestalled urn. Henry Grey, died 1686, aedicular tablet with Corinthian columns and and console brackets, surmounted by a coat of arms; William Wright, died 1765, tablet. North aisle. Tablets. Wollaston, died 1796; Mary Caddick, died 1829; Richard Wilkes, died 1824. Stained glass. Mainly late C19, the east window of the south aisle incorporates some C14 glass.