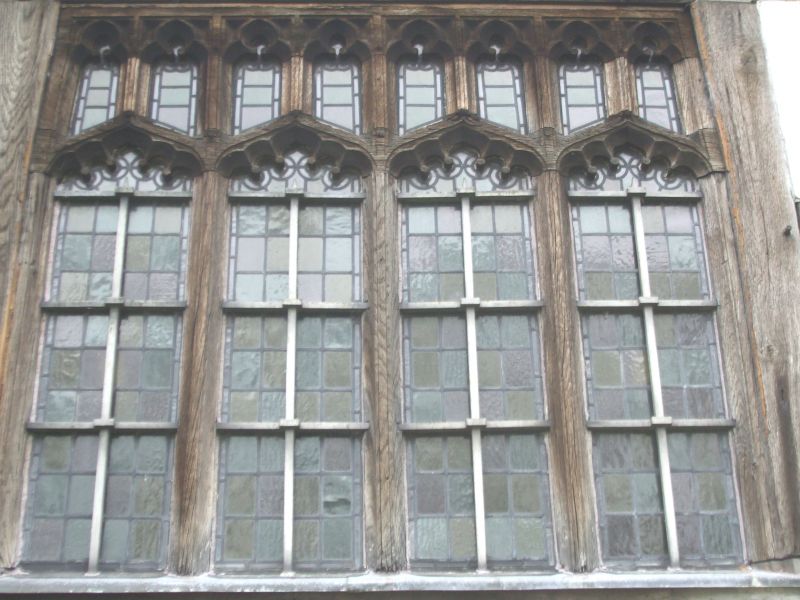 Church of England Parish: Altcar St Michael and All Angels

Church. 1879 by Douglas of Chester. Timber-framing on brick plinth with
red tile roof. Comprises a nave, west bell turret, south porch, north
aisle, lower chancel, north organ chamber, and vestry. Framing is mostly
close studding with a middle rail. To the left of the porch is a
chamfered one-light window. To the right the windows have depressed
cinquefoiled heads and are of 5, 4, and 4 lights. The pointed porch
doorway is formed by curved braces which rise from posts to a cambered
tie-beam. The purlins are tusk-tenoned through the bargeboards. The north
aisle windows have ogee lights and are of 4, 3, 3, 3, and one lights. The
west window is of 5 cinquefoiled lights with transom. Below the flat head
are quatrefoils. The bell turret is close-studded, with curved tension
braces on the north and south sides, and has a pyramid roof with finial
and weather vane. Below the eaves are shallow louvres, with timber
weatherings below. The south chancel windows are of 4 and 2 lights with
Perpendicular tracery and flat heads. Between them is a doorway with
Tudor arch. On the north side is a gabled organ chamber, and a vestry
projecting under a hipped roof. The east window is of 5 cinquefoiled
lights with tracery under a flat head. Interior: nave of 5 bays, with
chamfered aisle posts on north side which have curved braces to the
arcade plate and sling braces to raised tie-beams. On the south side
interrupted tie-beams at wallplate level are tenoned into similar sling
braces. The trusses have collars, and vertical struts which form close-
studding. The supporting structure for the bell turret occupies the west
bay. The 3 rows of purlins are windbraced. Posts directly support the
tie-beam of the truss between nave and chancel, which is closed above
tie-beam level. The chancel is of 2 bays and has a truss with tie-beam,
collar, raking and vertical struts. On the north side is an opening to
the organ chamber. At the east end is a tiled reredos. The communion
rails, chancel rails, and pulpit are of carved timber.