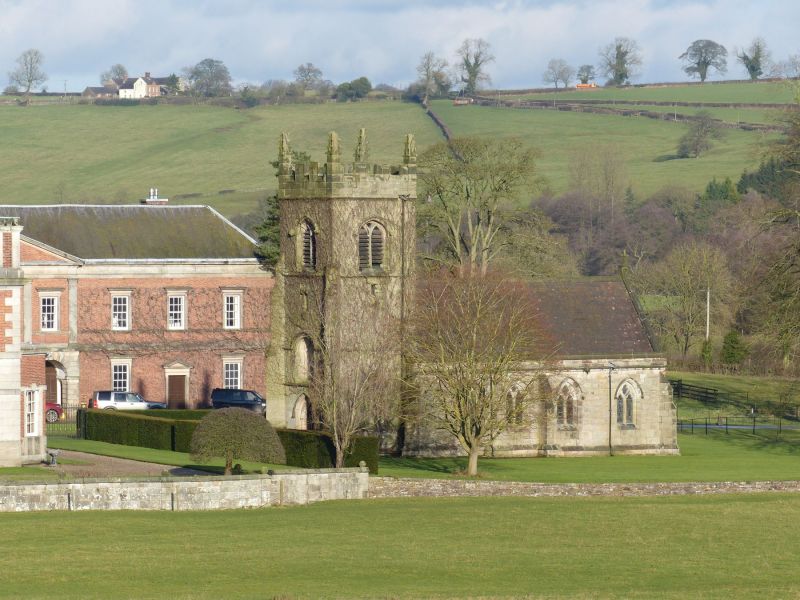 Former parish church now estate church. Early C14, restored 1856-8
to the designs of Sir George Gilbert Scott. Ashlar; shaped tile
roof with plain tile bands and moulded coped verges. West tower with
diagonal buttresses, 2-bay nave and 2-bay chancel under one roof line,
with diagonal buttresses to east and buttresses at division of nave
and chancel, south porch. West tower: 3 stages marked by strings,
restored West door with roll and fillet moulded pointed arch with
hood mould over; C15 West window of 2 cinquefoil-headed lights and
central mullion under a 4-centred arch, niche above window partly
obscured by plant growth at time of resurvey (October 1984); clock
to north side of second stage; louvred belfry openings with Y-tracery
under a 4-centred arch and hood moulds terminating in grotesque heads;
crenellated parapet with corner finials. Nave: windows have Y-
tracery and hood moulds; Chancel has 2-light windows with a single
reticulation over, beneath a pointed arch and hood moulds terminating
in heads, east window of 3 trefoil-headed lights, the central one
ogeed, the outer ones rounded, and Decorated tracery over, hood mould
terminating in male and female heads; nave and chancel have roll and
fillet moulded parapet string to moulded coped parapet, foliated
hollow below string and gargoyles at intervals. Interior: Tall
pointed tower arch; C19 nave roof of arch braced rafters, chancel
roof of decorative wooden panels; piscina probably C18 with project-
ing bowl resting on a bust. Fittings: Mid-to-late C19 font,
pedestal surrounded by marble alcoves with naturalistic foliated capi-
tals, bowl has a quatrefoil recess in each side with foliage decoration;
rood screen dated 1855 by Scott, 3 open work panels to each side of
central ogee arch, elaborately carved with foliage; choir stalls by
Scott carved with foliage; wooden pulpit mid-to-late C19 with stone
base and steps, ornately carved with foliage and twisted colonettes
with foliated capitals. Monuments: Palimpsest brass originally
commemorating William Lord Zouche (d. 1447) and Alice (Seymour) his
wife, with another wife and has been altered to a memorial for
Sir Humphrey Okeover, esq. (d.1538). Marble memorial to Leak and
Mary Okeover died 1765 and 1764 by Wilton, surmounted by an angel
holding a wreath in one hand and a torch in the other and resting on
an urn with the superimposed profiles of a man and woman on the base.
Stained glass: Some C14 glass in east window; S.E. nave window by
Warrington 1857. B.O.E. P.216; Kelly's Directory of Staffordshire
(1884).