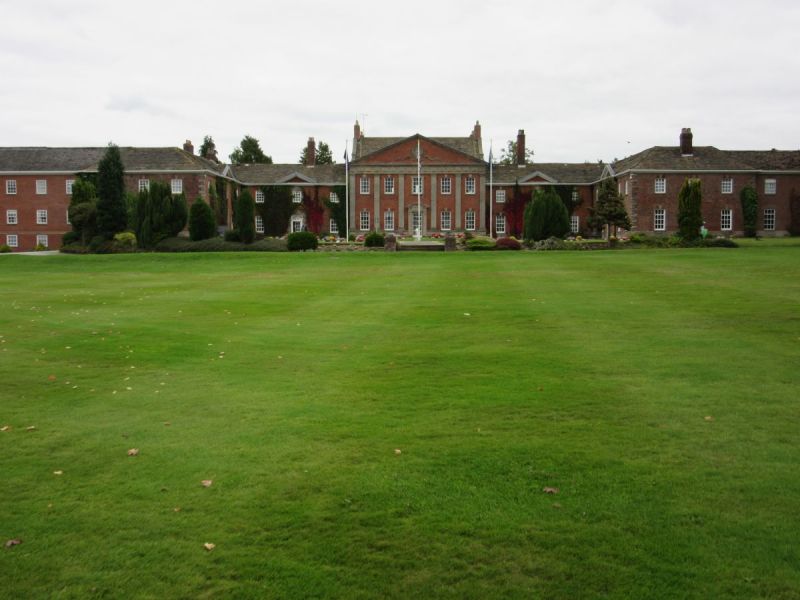 Interior: Former entrance hall has a good Adam-style ceiling with a
delicate cornice, border of rosettes, central circular panel bordered
by a running vine with a fluted roundel at the middle. Carved
softwood dado rail, skirting and door architrave with dot diamond
motifs and lines of husks. Good mahogany 6-panelled doors. Room to
left has lost ceiling but similar softwood carving based on fluting.
White marble fireplace has centrepiece of an urn with swags of husks.
Central passage has a long plaster groin vault with fan lunettes in
the side and other Adam motifs. Oak-well staircase has square iron
balusters, mahogany handrail, carved open string with raised roundels
above a band of fluting. Bressumers have urns in relief and
elliptical medallions. Stairwell lit by semi-circular headed window
with tracery in the tympanum. The ceiling is heavier with swags of
husks in the frieze, a ropework border and a central panel of acanthus
leaves. Garden rooms have eared architraves to doors and long windows
and mid C19 copies of the style of the ceiling in the stairwell. The
modern lobby has an oak panelled dado of early C18 style. The
fireplace is flanked by fluted wooden pillars carrying urns, acanthus
border to fire opening with roundels in the frieze above. Fluted
wooden pilasters in the openings to the adjoining rooms.

The full history of the house is uncertain and there is a simple plan
to the central block with direct entry to a room. This and the style
of the wings compares to Milnesbridge Hall, Huddersfield of c.1749 by
Paine or T Atkinson. The ceilings in the style of Adam are of good
quality although those in the garden rooms are a later pastiche.