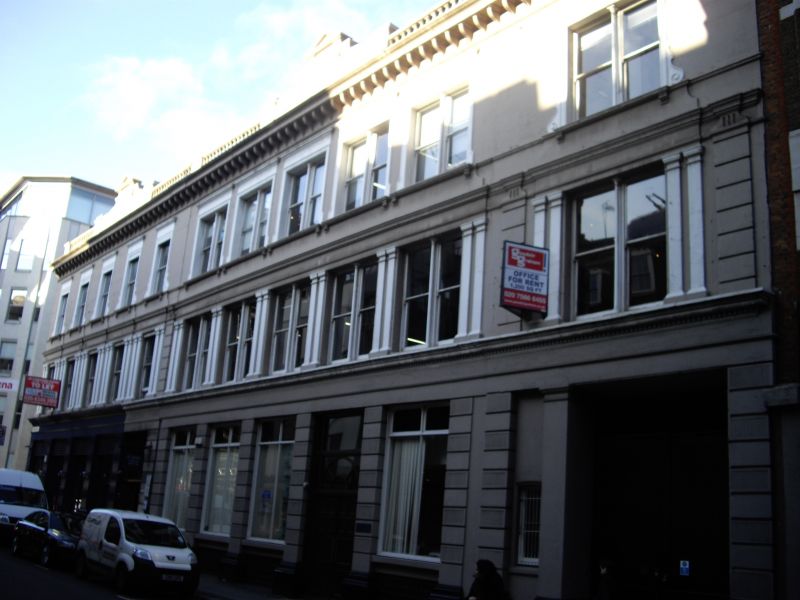 II
Former furniture showroom-warehouse in the Italianate style, c.1860, possibly for the firm Moore and Hunton, with 1887 remodelling and later alterations. Faced with stucco and with stone dressings. 3 storeys on corner site.
EXTERIOR: The design is derived in part from domestic models in contrast to the pier-and-panel form that became characteristic of the building type from the late 1870s. Main front to Worship Street of 11 bays, with a 6 bay return to Paul Street. The ground floors have piers with banded rustication and large shop windows above stall boards (indicating basement accommodation), those on Worship Street incorporating prism lights and ventilation grilles. The main entrance is at the corner of the building with a second entrance on Paul Street, which retains granite Corinthian columns and panelled doors, and a carriage way on Worship Street. The upper floors have flat-headed sash windows with paired pilasters on the first floor and architraves with scrolled feet on the second. The windows in the eastern half of the Worship Street façade differ slightly in width, perhaps indicating a phased construction. Other details include a ground-floor cornice, a continuous sill band and a deep-bracketed eaves cornice surmounted by a balustrade with pediments, apparently an original feature.
INTERIOR: Not inspected, but it is believed that the later subdivisions have obscured the original plan form, a pioneering marketing arrangement whereby furniture was arranged in 'showrooms', a new method of display copied from the emporia of the West End.

HISTORY: Moore and Hunton were present on the site by at least 1860 and, as an insurance policy taken out by Edward Hunton in 1866 makes clear, the premises was then more extensive than now and included other buildings and timber sheds ranged around a rear yard with saw pits. There were workshops heated by stoves with at least 26 makers benches, as well as dedicated packing areas. The showroom building appears to have been double the size of the present structure and extended further along Paul Street. When the main building was refurbished in 1884 following the death of Hunton it contained a 'spacious' basement and ground-floor showrooms displaying drawing room furniture. The staircase and landing to the upper floors also served as a display space for overmantels and looking glasses. Packing yards, finishing rooms, polishing shops and warehouses containing frames and other goods 'in the white' were also noted. Further, apparently more extensive, alterations occurred to the showrooms in 1887 when the firm was under new management. Externally this included the painting of the name of various overseas cities in the first-floor windows in gold letters, reflecting 'the centres of the firm's important colonial business' (Cabinet Maker June 1887, 328). Internally the showrooms were reworked as furnished rooms, in imitation of the West End furniture emporiums, so that 'retailers could bring their friends to see such finished furnishings complete, even to the books on the table' (Ibid). Moore and Hunton claimed to be the pioneers of this approach in the East End.

By 1899 the firm had left the building, which was subsequently subdivided. The interior as described in c.1915 was well-appointed with offices throughout - the best with mahogany doors and teak partitions - and a granite floor on the ground storey. Tenants included the Home and Colonial Stores Ltd, who had offices here until the 1920s. Other inter-wars uses included a radio warehouse on the ground floor and an upholstery and trimmings factory on the upper floors. The northern half of the site, Nos. 6-8 Paul Street, was redeveloped in the 1960s and the rear warehouses and workshops were probably cleared for a vast late-C20 office development at the corner of Worship Street and Clifton Street. Nos. 2-4 Paul Street have been refurbished and the ground floor converted to a bar.

SUMMARY OF IMPORTANCE:
This handsome Italianate building of c.1860 is thought to be one of the earliest showroom-warehouses in South Shoreditch, an area that from the mid-C19 to the mid-C20 was the hub of the international furniture trade. The area manufactured, sold and supplied furniture of all types and quality to retailers in the West End, provincial cities and throughout the British Empire. 2-4 Paul Street has special architectural interest for its richly detailed Italianate elevations and special historic interest for its position as an early surviving example of a showroom-warehouse in this significant furniture manufacturing area.