The Former Ark of the Covenant 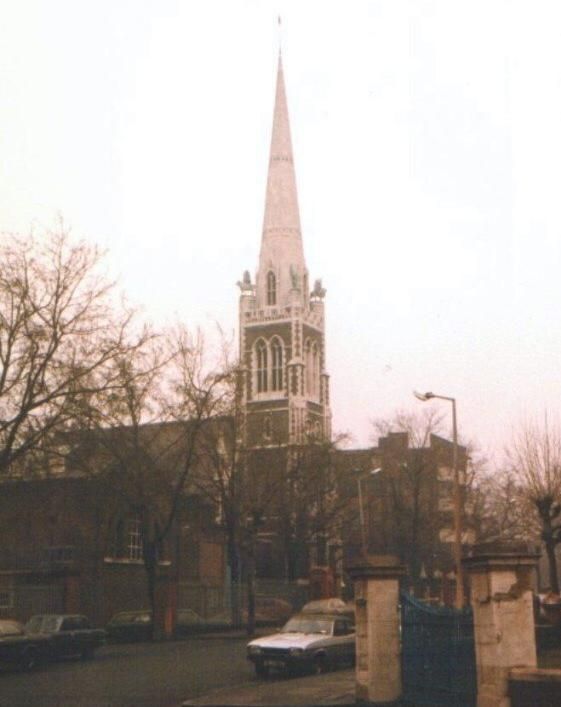 Entry Name: The Former Ark of the Covenant

EXTERIOR: the tall Gothic tower has tapering set-back buttresses, heavily quioned in Portland stone, and a needle spire which creates a strong verticality fronting the open space of Clapton Common. The four corner turrets, each bearing the inscription 'GOD IS LOVE', are topped with winged bronze representations of a lion, ox, eagle and winged human figure. The same figures appear further down, in stone this time, projecting from the corner buttresses on the north, west and south faces of the tower. Each tramples underfoot a tiny winged human figure, symbolising the trials of earthly existence: Death, Sorrow, Crying and Pain. The four beasts are the 'living creatures' described in the Book of Revelation and the apocalyptic imagery introduced here is a theme of the church's iconography. Above the main west window are two roundels bearing relief carvings, depicting the chariot of Elijah and the scroll of Enoch, whilst over the west door in Gothic letters is carved the motto 'LOVE IN JUDGMENT AND JUDGMENT UNTO VICTORY'. The latter phrase is from Matthew 12:20 ('A bruised reed shall he not break, and smoking flax shall he not quench, till he send forth judgment unto victory'), but the former may be an Agapemonite coinage. The deep-recessed door has paired marble columns and extensive hingework. The five-bay nave with prominent quoined buttresses and shallow chancel apse runs back from the tower, all constructed with roughly coursed rubble and Portland stone dressings. There is a second entrance to the church at its south-eastern corner. Between the nave and tower are octagonal turrets with spirelets and there is also a small staircase turret abutting the southern side of the tower. Notwithstanding the statuary, the style of the church is the Decorated Gothic style of the C14.

The gates, gate piers and railings bounding the churchyard are separately listed at Grade II.

INTERIOR: Entering through the west door, there is a porch and then an elaborately carved classical vestibule screen, glazed with stained glass. The vestibule leads to the nave where the great hammer-beam roof that spans the broad, unaisled interior is supported on stone corbels, more delicate in style than the sculptures on the exterior but repeating their motifs and also by Walker. The mosaic band that runs above the marble revetments in the apse includes representations of the Pelican in her Piety and the Phoenix, alongside text from John 11:25: 'I AM RESURRECTION AND THE LIFE.' The nave benches, with their openwork end-pieces, are original fittings as are the lectern and Italianate pulpit with a marble base, scrolled gilt-iron handrail and carved wooden tester. There is also a Father Willis organ. The altar, which was a later addition, replacing the 'throne' reserved for John Smyth-Pigott that formerly occupied the top of the curved marble steps in the apse, has been removed. The basement, dug only to the rear of the building, houses offices and a large room, apparently where Agapemonite services were held in private after Smyth-Pigott's controversial proclamation.

STAINED GLASS: Most striking of all are the superb windows by the Arts and Crafts painter and illustrator Walter Crane, which present Old Testament imagery, allegorical scenes and symbolic flora using thick, semi-opaque glass. The nave windows, in an Art-Nouveau style, depict figs, lilies, pomegranates, olives, grapes, corn, roses and other flowers. These windows are signed, 'Designed by Walter Crane / Executed by J S Sparrow' and bear the initials of the artist and craftsman, Crane's featuring a crane, and Sparrow's a sparrow; it was the first collaboration between the pair. The east window is of the Dove of Peace, with a ribbon reading 'Oh Holy Dove', and the Lion of Judah; it is flanked by images of Elijah in his chariot and Enoch's translation to heaven. The west windows are the most dramatic and owe the greatest debt to the illustrations of William Blake. The central window depicts a sun rising above the seas, complete with aquatic creatures, framed by a banner bearing the words of Malachi 4:2, 'Even shall the Sun of Righteousness arise with healing in his wings', this held aloft by angels. Flanking this are two-light windows containing allegorical figures representing Disease and Death (to the left) and Sin and Shame (to the right). The stained glass is distinctive and original in style and technique, with dense, mosaic-like qualities and strong contrasts of colour; it is the most significant work in this medium by Crane. The connection with the eccentric sect whose theology it represents is also important. Enoch and Elijah symbolise apotheosis, as does the Sun of Righteousness, the latter also emphasising the apocalyptic theme and pointing to the Second Coming, when Sin, Death, Disease and Despair (in the flanking windows) will be cast away. The nave windows could symbolise the flowers and fruit of the new creation described at the close of the Book of Revelation. The Builder in October 1896 said of the glass, 'it is difficult to write without superlatives; for richness and magnificence of colour we believe it never has been, and is not likely to be, surpassed'. The effect was achieved in part by the use of early English slab glass, a technique for making glass devised by ES Prior in 1889, the principal characteristic of which is irregularity in the thickness of the glass, creating a depth of colour similar to that of medieval stained glass. Designs for the windows survive in the archives of the Royal Borough of Kensington and Chelsea. There is further stained glass in the traceried screen and vestibule at the west end, in the corner vestries and the basement some of which is likely to also be by Crane.

HISTORY: The Agapemonites, also known as the Community of the Son of Man, emerged in the 1840s among the followers of Henry Prince, an itinerant preacher, charismatic leader and renegade minister of the Church of England. Prince and his followers settled in Spaxton, Somerset, establishing a religious community or 'Agapemone', meaning Abode of Love. Those who joined the commune were encouraged to sell off their possessions and this income permitted the development of a large estate in Spaxton and, by the 1890s, a church in north London, the Ark of the Covenant. Built at a cost of some £15,000, the Clapton church was prompted by a group of non-resident followers who wished to meet and practise their religious observances in an appropriately lavish setting.

The sect attracted notoriety, largely through the activities and pronouncements of its leaders. By the 1860s Prince was proclaiming himself to be the incarnation of the Holy Spirit. Scandals - and lawsuits - soon began to surround the group, as it became clear that the 'spiritual marriages' contracted between the sect's leaders and various female followers had a carnal dimension. After Prince's death in 1899, he was succeeded by an equally magnetic character, John Smyth-Pigott. Smyth-Pigott resided at Clapton in his first years as leader and the Ark of the Covenant briefly became the de facto headquarters of the sect. Smyth-Pigott's relations with the numerous women who fell under his influence continued to cause periodic outrage among the public. Things came to a head in 1902, when at a quiet service on 7 September, Smyth-Pigott declared himself to be Jesus Christ, the Son of Man, the Second Coming. When he repeated his claim a day later, an excitable mob of several thousand taunted the congregation and chased Smyth-Pigott's brougham across Clapton Common to shouts of 'hypocrite'. Smyth-Pigott soon retired again to Spaxton, where he died in 1927, not before being defrocked as a minister of the Church of England in 1909.

Joseph Morris and Sons were selected as architects for their connections with the sect. Although a Quaker, Joseph Morris contributed to the purchase of the site on Rookwood Road and two of his daughters, Violet (also an architect) and Olive (a wood-carver and engineer) were residents at the Spaxton Agapemone. It is very likely that Violet was involved in the design of the Ark of the Covenant; she had assisted her father and brothers in commissions in the Berkshire area and was the sole designer of a number of houses in Spaxton including East Gate House at the Agapemone (surviving, unlisted). Olive is believed to have carved the pulpit, and possibly also the lectern, in the church.

The Agapemonites were one of a number of sects active in Victorian society. The repeal of the Test and Corporation Acts in 1828 had removed a legal barrier to non-conformist Christian worship and a plurality of beliefs emerged. The Anglican orthodoxy was shattered both from within, where Tracterians pitted themselves against the Evangelicals, and without. Some movements - the Methodists, Unitarians and Baptists, for example - traced their beliefs back to the dissenters of the mid-C17; others at the bizarre end of the spectrum - Spiritualists, Comteian positivists, Occultists to name a few - emerged from the philosophical theories of the day and were only popular for a few decades. Very few of the latter movements formed structured organisations and the Agapemonites are unusual in this regard, although they are representative of many religious movements of the late C19 in concocting a hybrid of beliefs from conventional Christian doctrine and other schools of thought.

REASONS FOR DESIGNATION: The former Ark of the Covenant church is listed at Grade II* for the following principal reasons:
* an imposing, and very complete, late-Victorian church with a tall landmark spire, a splendid hammerbeam roof and a largely intact scheme of original fittings;
* accomplished tower sculptures by a notable sculptor, AG Walker;
* the stained glass is extraordinary and has more than special interest in the context of Arts and Crafts stained glass;
* special historic interest as a built manifestation of the plurality of religious ideas that emerged in the C19, evidencing the more bizarre end of the belief spectrum. The theology of the Agapemonites is manifest in the church's architecture and art to a high degree and the most significant events in the history of the sect occurred here.
TQ3407287831