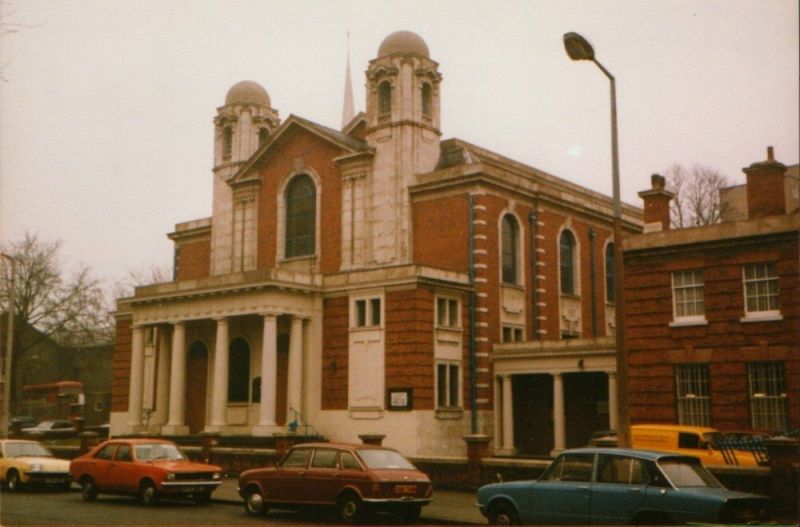 Synagogue and attached school. C 1914-15 by E M Joseph and partner Smithem, the synagogue interior copying the apse and galleries of John Davies's New Synagogue, Bishopsgate, of 1838 and incorporating some original fittings from the earlier building. Red brick with stone dressings and quoins; gabled roof.
EXTERIOR: Edwardian Baroque style. Pedimented 2 storey front; 6 window returns. Front with projecting ground floor of banded brickwork above a stone podium and having a projecting tetrastyle Doric portico flanked by moulded stone panels with 2-light mezzanine windows above. 2 round-arched, architrave entrances with lugs and keystones, fanlights over and panelled doors, flank a similarly architraved central window. 1st floor has similar architraved central window flanked by paired stone pilasters with an entablature supporting a small broken pediment. This feature flanked by rectangular stone towers, rising through the 1st floor and having round-arched windows in pediment aedicules to each face; domed roofs. Returns with architraved windows in to ground floor having keystones projecting into aprons of round- arched architraved windows with keystones and lugs at 1st floor.
INTERIOR: Vestibule has Ionic columns and entablature to vaulted ceiling. Main galleried space in Italianate style with barrel-vaulted ceiling having inset lunettes; panelled ceiling above galleries. Gallery supported on Doric columns and entablature, above which, Corinthian columns and entablature to ceiling. Paired Doric pilasters and Corinthian columns flank apsidal end {housing the Ark) with Corinthian column screen to gallery; coffered dome ceiling with central oculus. The Ark from the 1838 synagogue was resited here in its entirety, including the 1838 mahogany doors with curved patterns, the central "bimah" was remodelled from the old building, rebuilt to a smaller scale without the choir, benches with armrests were resited and the eight candelabra were removed from the earlier synagogue but are probably late 19th Century rather than 1838. Stained glass of c1915 and later and pulpit of 1919. A tetrastyle in antis stone loggia links the synagogue to the contemporary school. Channelled red brickwork with stone dressings. 2 storeys 3 windows. Gauged red brick flat arches to recessed sashes, the ground floor with keystones. Stone cornice and blocking course behind which appears a brick gabled end.
HISTORY: A declining congregation in that part of London before the First World War led to the Great St Helen's synagogue being sold to the Shell Transport and Trading Company. Following the erection of the new building in Egerton Road the United Synagogue had made a sufficient profit to underwrite the building of many more synagogues throughout London.