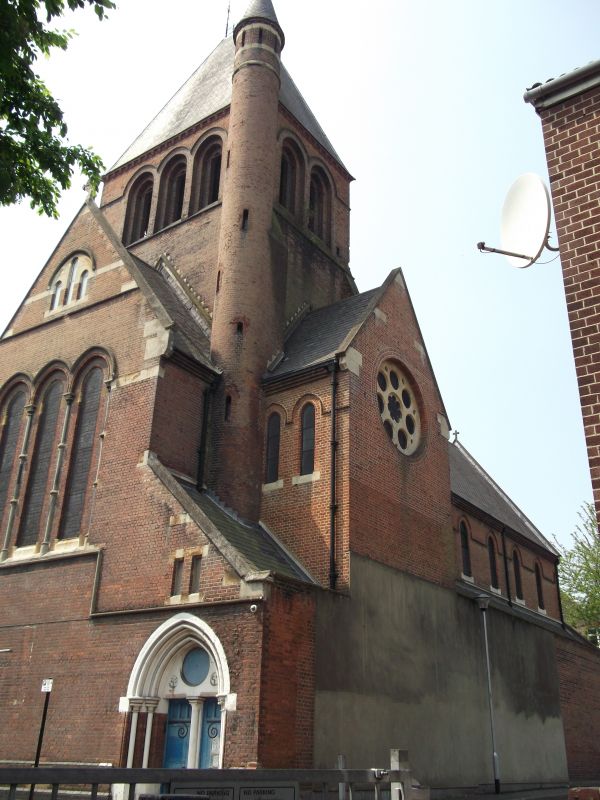 EXTERIOR: This is a powerfully composed, short church, built of red brick in the Early English style and achieving a bold effect with an economy of means. The most impressive aspect is from the SE with a short sanctuary and a severe rectangular tower (longer N-S) placed over the choir. Behind this stretches the three-bay nave. The E end of the chancel has three equal-height lancets. The tower has three lancet belfry windows on the E and W faces and two on the N and S. Its roof, truncated at the top, is of the pavilion type and helps give this part of the church a somewhat Germanic feel. At the NE corner there is a bold circular stair-turret which terminates above the level of the tower eaves in a conical roof and, again, is reminiscent of Germanic rather than English precedents. To the N of the tower is a tall transept arrangement for the organ chamber. The nave has two plain lancet windows for each bay of the clerestory. The N and S walls of the aisles are blind. At the W end the nave wall has four large equal height lancets above which are three further shorter lancets placed beneath an enclosing arch. The N transept has a circular window filled with a series of circles. At the NE corner there is a large entrance with a moulded arch, central shaft, large circle in the head and nook shafts.

INTERIOR: The interior surfaces, originally of bare brick, and architectural details are sadly, all covered in white paint (this had been done by 1966 Clarke noted). The building is tall and, given its relatively small physical dimensions, has a sense of generous proportions. In the arcades there are three wide, plain arches either side with squat waterleaf capitals and round piers. There are roundels placed in the valleys of the arches. The clerestory forms a continuous band of identical arches and lancet windows. At the crossing the arches from the nave and to the chancel are tall and have moulded arches rising from short shafts, which in turn rise from small corbels. The tower space is vaulted. In the nave the roof is quite plain seven-sided rafters and small tie-beams. In the chancel the roof is keeled.

PRINCIPAL FIXTURES: The church has been refitted internally although the low plain wall between the nave and chancel, and the octagonal font are from the C19. At the W end there is a screen bearing depictions of saints under cusped arches: this was brought from St Philip, Dalston, after this church suffered war damage in October 1940. The E window has post-war glass by A F Erridge.

SUBSIDIARY FEATURES: Immediately W of the church is the brick-built Trinity Church Institute. This has two tiers of stone, mullioned and transomed windows to the main elevation which faces the road and a further such window in the gable. It appears to have been built in two faces, the main block (nearest the road) being dated 1880.

HISTORY: The church was built from the proceeds of the sale of St Martin Outwich in the City. It is one of many examples in east London of a church built to achieve an imposing effect with limited resources. The architect, Ewan Christian (1814-95), was a prolific church-builder and restorer. He was schooled at Christ's Hospital until 1829 when he was articled to Matthew Habershon. He broadened his education with travel on the continent in 1834 and the following year assisted one of the entrants in the New Palace of Westminster competition with the drawings. He worked in the offices of William Railton in London and then John Brown in Norwich. He commenced practice in 1842 and was appointed architect to the Ecclesiastical Commissioners in 1851 a post which brought many commissions, especially in the chancels for which the Commissioners were responsible. He gained a reputation for efficiency and bringing jobs in on time and on budget. His work, however, does not generally enjoy a high reputation and much of it is quite routine although his best churches, notably St Marks, Leicester, and Holy Trinity, Folkestone, can stand comparison with the better churches of the C19.

REASONS FOR DESIGNATION:
Holy Trinity church, Hackney, is designated at Grade II for the following principal reasons:
* It is an imposing late C19 red-brick church by a well-known church architect in the Early English style but with a crossing tower and spire suggesting continental influence.
* One of a series of impressive High Victorian churches in this part of London, embodying a dynamic sense of mission in its outward form.