A Grade I Listed Building in Stock, Essex 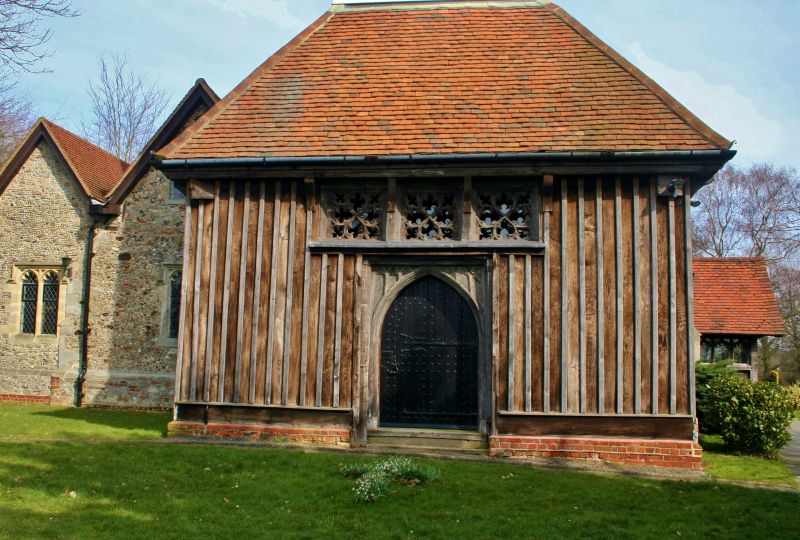 MATERIALS:
Mixed rubble with some free-stone and pudding stone. The dressings are limestone. The belfry and spire are timber, and the others roofs are tiled.

EXTERIOR:
The very fine timber W belfry has a wide lower storey from which rises a tall tower with a broach spire. Both the tower and the lower stage are weatherboarded. The N and S walls of the lower storey each have a fine 3-light C15 window timber tracery, and there are three square panels with cusped timber tracery above the W door. There is a probably late C17 addition on the E side of the tower, connecting it to, and rising over, the nave roofline. The spire has a dragon weathervane dated 1760.

The S nave windows are C15 in style, much renewed in the C19 and C20. The C15 S porch is timber framed and has a 4-centred doorway and elaborate, renewed barge boarding externally and a king post roof internally. There are ogee arched openings in the E and W faces of the porch. The S door is probably late C14.

The N aisle is now largely covered externally by the N vestry added in 1989, but retains a much renewed C15 window towards the E end and another at the W end. The vestry is in a matching style. There are two small trefoiled lights in the W gable of the aisle, The C19 chancel and NE chapel are in a mixed Decorated and Perpendicular style.

INTERIOR:
The framing of the belfry tower is exposed internally. The main structure stands on four posts with curved braces at each stage and curved diagonal principals that meet at a boss carved with a Green Man (recoloured). The initials R.R. and E.H., 1683 carved on the NE post probably refer to restoration and the construction of the E extension of the tower.

The nave W door, visible internally within the tower, is C14. The organ is painted and stands on a painted, C20 gallery at the W end of the nave. In the SE corner of the nave, a brass to Richard Twedye, d. 1577, is set in an arched recess that was probably a piscina. The C19 nave roof was restored after bomb damage in WWII and the ceiling has painted decoration.

The C15 N arcade is of 4 bays, but the W bay is much shorter than the others, perhaps as a result of a setting out error. A pair of trefoiled lights in the E gable of the aisle like those at the W end now open internally. A door in the SE corner of the N aisle, now giving access into the chancel like a squint, is a reworked late C14 or C15 rood stair door that retains traces of medieval paint. The N aisle has a fine, 3-bay king post roof with moulded and embattled wall plates.

The arch into the N chapel is C19 in a C14 style. The C19 chancel arch is on Decorated-style corbels. The chancel roof is 1848 and was painted in the C20.

PRINCIPAL FIXTURES:
The church was largely refurnished in 1981 to designs by Laurence King, and has chairs and simple choir stalls of that date. A C15 bench with poppy heads is preserved at the W end of the nave. C15 stoup by the S door. Brass to Richard Twedye, d. 1574, founder of the almshouses opposite the church, set into what may have been a piscina in the SE corner of the nave. Plain octagonal C15 font with a cover of 1970 by Francis Stephens. C18 turned altar rails. Limewood rood figures by Gwynneth Holt, 1955 in the N aisle. Some good mid C20 glass installed following damage in WWII, including E window by Reginald Bell of 1948-50, three windows by M C Farrar Bell of 1951-9, and a chancel S lancet by David Wasley, 1986.

HISTORY
For much of its history, All Saints, Stock, or Stock Harvard as it is often known, was a chapel dependent on nearby St Mary, Buttsbury. Buttsbury is now depopulated, but it was a large parish with many manors and the church there has Anglo-Saxon origins. Stock has subsequently become the much larger settlement. The double-square plan of the nave of All Saints suggests a C12 date for the church, but the discovery of earlier foundations during C20 restorations, suggests that it too has Anglo-Saxon origins. The nave is C12 in origin, but earlier foundations were discovered below it during restoration in the late 1940s. The earlier chancel is of unknown date, but was presumably contemporary in origin. Some work was done on the nave in C14, and in the C15 the church underwent a significant remodelling, with the addition of the N aisle, S porch and W belfry tower. The tower was extended eastwards in the later C17. Only the altar rails survive from the Georgian furnishings. The nave was restored, and the chancel was rebuilt in 1847-8. The N chapel was added in 1904. The church was badly damaged in WWII. In 1981 it was refurnished to designs by Laurence King with decoration by Campbell, Smith and Co. The N vestry was added in 1989.

The very fine timber belfry is of a type common in this part of Essex, where there was much timber but little good building stone.

REASONS FOR DESIGNATION
The church of All Saints, Stock, Essex is designated at Grade I for the following principal reasons:
* Outstanding C15 timber belfry tower (`One of the most rewarding sights in Essex': Shell Guide 1968) and S porch.
* Medieval church with C12 origins, remodelled in the C15 and sympathetically restored in the C19 and C20.
* Surviving C15 N aisle roof.