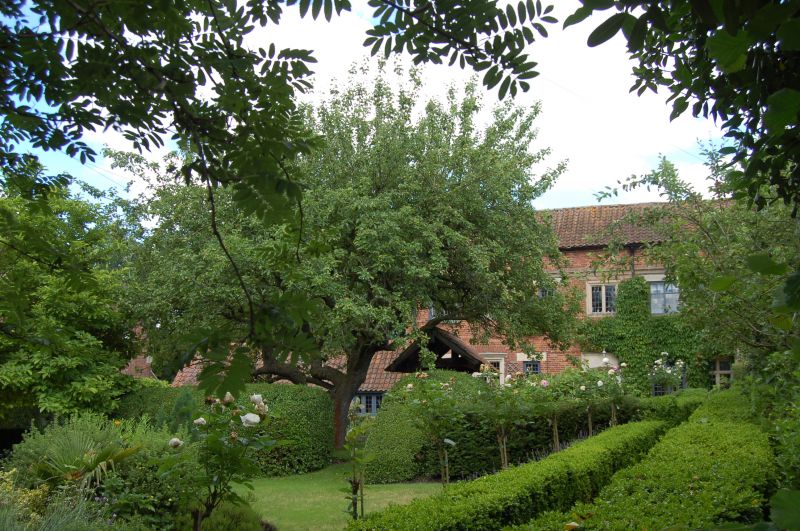 2 houses. Mid C18, remodelled early C19. Coursed squared stone
and brick, with ashlar dressings and pantile roofs. 2 gable
and single ridge brick stacks. Moulded first floor lintel
band. Coped gables with kneelers. 2 storeys plus garrets; 9
window range. L-plan. Windows have leaded glazing and stone
mullions; those without mullions have stone lintels. Gabled
wing, to right, has 2 single light windows with stone
surrounds and cornices, and above, 2 windows with stone
lintels and a blank shield in a panel between them. Each
return has a 4-centred arched door flanked on the outer side
by a 2-light window. Main block, to left, has a small central
window flanked by 2-light windows with stone surrounds and
mullions. Beyond, cross casements. To right again, a 2-light
mullioned window. Off-centre 4-centred arched board door with
label mould, flanked to right by a cross casement, then a
mullioned cross casement. To left, a cross casement flanked by
single light windows. To right, beyond the wing, a mullioned
2-light window and below, a mullioned cross casement and a
smaller window. End gables have single garret windows.
Adjoining the left gable, a single storey stable, 2 bays, now
a garage.
This building is probably one of those refronted c1790-1820 by
George de Ligne Gregory and remodelled in a picturesque style
c1820-1840 by Gregory Gregory, successive Lords of the Manor
of Harlaxton.
(The Buildings of England: Pevsner N, Harris J & Antram N:
Lincolnshire: London: 1964-1989: 361-362; Rowlands G:
Harlaxton Manor: Harlaxton: 1984-: 20-29).