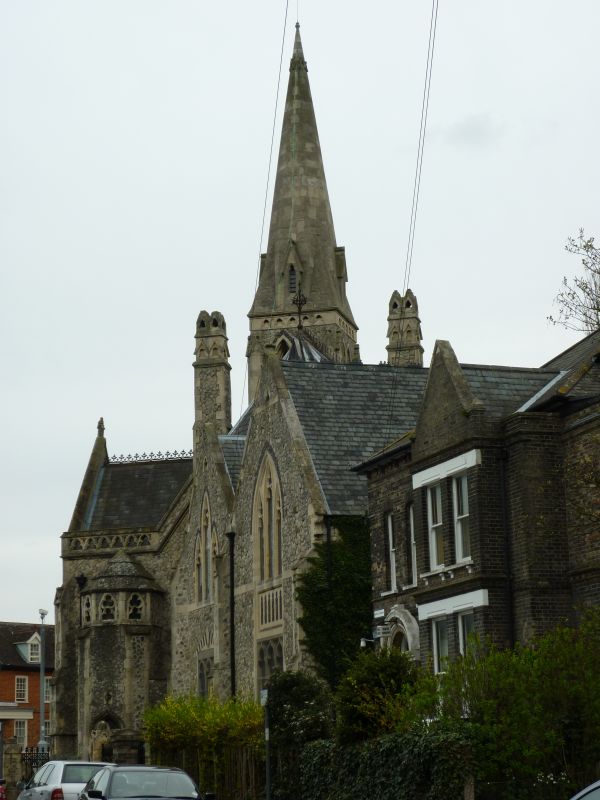 United Reformed Church, formerly Presbyterian and attached Parish Rooms. 1870
additions c.1890. Designed by Frederick Barnes. Built by Henry Luff. In the
Gothic Revival style. Kentish rags tone rubble with ashlar and blue brick dressings. Slate roofs with moulded coped gables and kneelers, plus ornate iron ridge decoration. Trefoil pierced parapets, and chamfered plinth. Nave and north-western tower with spire, plus transepts and polygonal apse. Eastern entrance front has nave gabled wall flanked by single projecting gabled porches topped by cross finials and with pointed arched doorways. Between, 3 single pointed lancets, and above a large 5 light pointed arched window with Geometrical tracery and a hood mould and banded blue brick and ashlar voussoirs. To the south a polygonal stair turret and to the north a square tower, with double lancet bell-openings to each face and above a broached ashlar spire with a single set of gabled lucarnes. Nave north wall has 3 tall 2 light pointed arched windows, and to the west a projecting gabled transept. The apse has 3 small triple lancet windows. To the south-west the gabled parish rooms in a similar style. Interior has a fine wooden roof and contemporary wooden fittings, though with white washed walls.