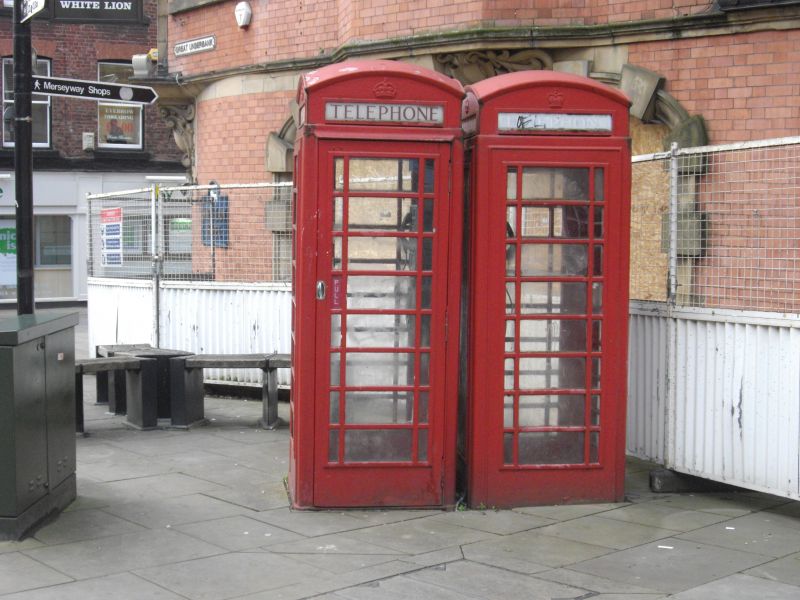 Pair of K6 Telephone kiosks designed by Sir Giles Gilbert Scott and made by various contractors.

DESCRIPTION: The kiosks are identical, constructed in cast iron, with three glazed sides in eight registers with margin lights, and a solid rear side with reeded decoration. The Soane-inspired canopy dome is placed above the four arched sides, each with a crown in relief above a glazed panel inscribed 'TELEPHONE'. The kiosks are placed back to back and contain modern telecommunications equipment.

HISTORY: The archetypal K6 telephone kiosk was introduced in 1935 to celebrate the silver jubilee of King George V and is commonly known as the 'Jubilee Kiosk'. It was designed by Sir Giles Gilbert Scott as a development of his earlier K2 kiosk design of 1924. Its design has become iconic and represents the careful adaptation of Neoclassical design, influenced by the work of the Regency architect Sir John Soane, to a mass produced object with a modern technological function.

REASONS FOR DESIGNATION DECISION: The pair of K6 telephone kiosks on Great Underbank are designated for the following principal reasons:
* The K6 telephone kiosk is an iconic example of industrial design, showing Giles Gilbert Scott's adaptation of Neoclassical forms for a modern technological function.
* The pair are a good example of the type, sited in a Conservation Area and surrounded by listed buildings, being directly outside the listed White Lion Hotel and 16-18 Great Underbank.