A Grade II Listed Building in Bridges, Newcastle upon Tyne 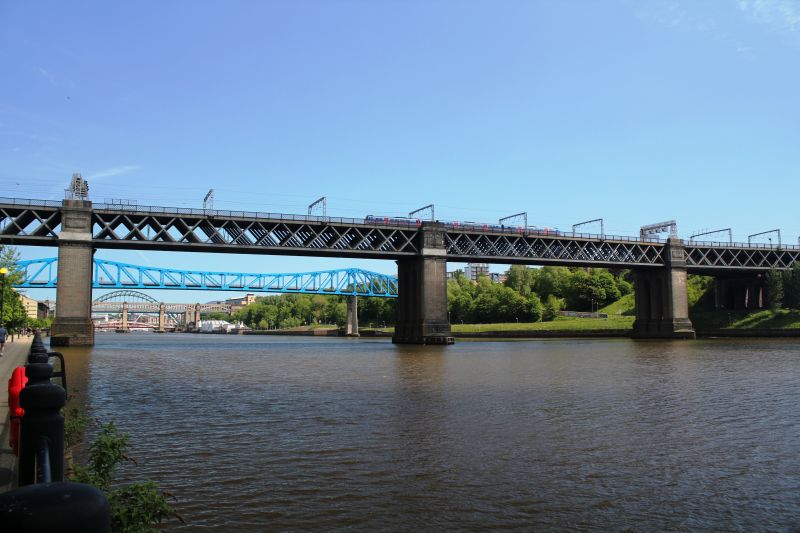 NEWCASTLE UPON TYNE
NZ 26 SW King Edward Railway Bridge
1833-/11/10044
II
Railway bridge. 1902-6 by Charles A. Harrison for the North Eastern Railway;
contractors Cleveland Bridge and Engineering Co. Sandstone ashlar piers and red
sandstone approach viaduct with steel girder bridge deck. Originally planned to have only
2 lattice girder spans, the discovery of old coal workings caused a change of design to 4
steel spans. 5 ashlar piers, of which 3 are in river, are pierced by 2 tall arches rest on high
plinths and support steel lattice girder bridge deck. Strings on piers along line of upper
and lower girders, and raised panels between, give classical proportions to piers which rise
to parapets above rail track bed. Land approach on north side is rock-faced stone and has
10 tall arches with voussoirs, all now containing renewed doors and glazing to workshops,
between the river and Pottery Lane. East Coast Main Line electrification girders added
to bridge. The southern half of the bridge is in Gateshead District.

The asset was previously listed twice also under the parish of Gateshead at List entry 1248576. This entry was removed from the List on 7 June 2017.