A Grade I Listed Building in Normanton on Soar, Nottinghamshire 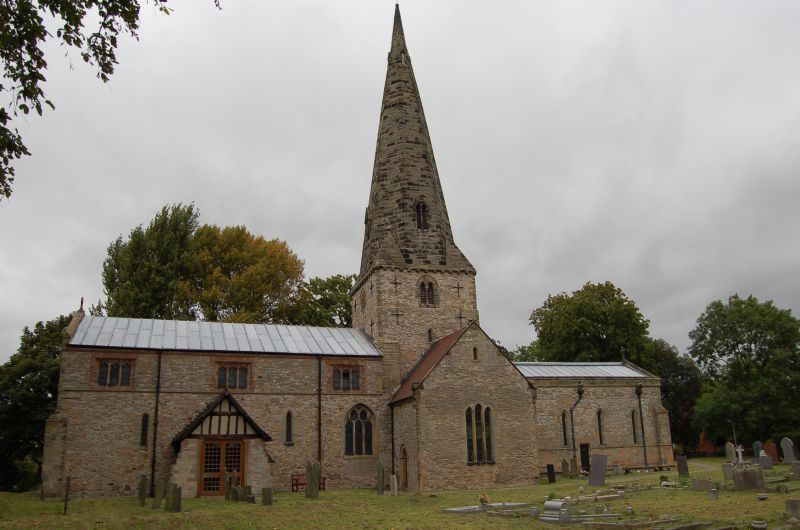 NORMANTON ON SOAR MAIN STREET
SK 52 SW
(west side)
7/51 Church of St. James
13.10.66
I
Parish church. C13, C14, C15, north transept built 1889-90 by W.
S. Weatherley, repaired 1938, restored 1913. Dressed coursed
rubble and ashlar, some half timbering. Plain tile and lead
roofs. Coped gables with single ridge crosses to west nave and
east chancel. Parapet to chancel. Single stack to north wall of
north transept. Crossing tower with spire, transepts, nave,
south porch and chancel. C13 tower being of 2 stages above the
transepts with clasping buttresses to the south side and the
north east. Corbel table topped with broach spire with 2 tiers
of 4 lucarnes, the lower with 2 lights. The north side of the
tower has a single small arched light and a single rectangular
light and the south side a single small arched light. North,
south and east sides with 5 tie plates, the west with 4. The 4
arched bell chamber openings each have 2 arched lights, that on
the west side being smaller. West nave with clasping buttresses
and shallow chamfered plinth has a single C13 window with 5
pointed arched lights. The north wall on a similar plinth has a
double chamfered round arched doorway, with imposts and hood
mould. To the left is a single C13 round arched light with hood
mould. Clerestory with 3 C19 windows each with 3 cinquefoil
arched lights under a flat arch. Continuous sill band. In the
re-entrant angle between transept and nave is a C19 stair turret
of 2 stages, the top stage being set back. Caernarvon arched
doorway with single rectangular light above. The west wall of
the north transept has a chamfered round arched doorway with
imposts and continuous hood mould forming a sill band to the
windows in the north and east walls. North wall with single
arched window with 3 pointed arched lights surmounted by 2
quatrefoils. Single similar 2 light window in the east wall.
The chancel is set on a low plinth with moulded band extending
over. North wall with round arched doorway with chamfered jambs
and moulded arch. continuous hood mould over forming a sill band
to all of chancel, broken at the south side by a doorway. To the
left are 3 C13 lancets. There are 3 gargoyles. The east wall
with clasping buttresses has a single arched C13 window with 4
pointed arched lights surmounted by 4 crude quatrefoils. The
south chancel has 2 C13 lancets with hood moulds, that on the
left decorated with nail head. To the left is a doorway with
moulded surround. Further left is a single similar lancet with
plain hood mould and on the far left a single arched C14 window
with 2 cinquefoil arched lights and a single transom. There are
2 gargoyles. The south wall of the transept has a single window
with 3 pointed arched lights. Above is a single small arched C19
light. The west wall has a chamfered round arched C19 doorway
with imposts and hood mould. The south nave has a restored C15
arched 3 light window with cusped tracery. To the left is a
single C13 lancet. Further left is the gabled and buttressed
porch. Entrance with half timbering over. Inner C13 moulded
arched doorway with remains of single of 2 orders of colonnettes,
hood mould. Further left is a single C13 lancet. The clerestory
corresponds to the north. Interior. Tower/chancel, nave and
transept arches all C13 triple chamfered with keeled responds and
moulded capitals, being decorated with nailhead to the south
side. The chancel has a continuous sill band broken in parts by
the doorways. The south wall has an arched piscina with C19
pedestal piscina to the right. North wall with aumbry and east
wall with 2 rectangular niches under the window. The south
transept has a small piscina in the east wall with rectangular
niche over and single similar smaller niche in the south wall.
C14 octagonal font, the pedestal decorated with quatrefoil panels
and the bowl withblind tracery. 7 C17 benches. C17 oak chest.
Over the nave/tower arch is a plaster Royal Arms, 1683, the arch
is flanked by single plaster heraldic shields. Nave roof with
C15 moulded beams and carved bosses. On the south wall of the
nave is a lead plaque dated 1701 listing the church wardens.
There are memorials to John Bosworth, 1832 and Elizabeth Cox,
1833. Both with inscription tablets in the form of a
sarcophagus. That to John Powell, 1777 by Hull is topped with
decorative volutes. There is a further memorial to Anne Bagdale,
1768, the inscription tablet is flanked by fluted pilasters with
dosserets decorated with fleuron. Cornice surmounted by a
decorative urn. In the north chancel is a memorial to Frances
Willoughbie, 1606, an arched niche supported on pilaster strips
decorated with strapwork contains the kneeling female figure and
a lectern. There is a further memorial to William and Susanna
Willougby, 1636. Surmounting the inscription tablet are 2
kneeling figures flanked by single decorative panelled pilasters
supporting an ogee arch and finial over. The arch contains a
shield.