A Grade I Listed Building in Ratcliffe on Soar, Nottinghamshire 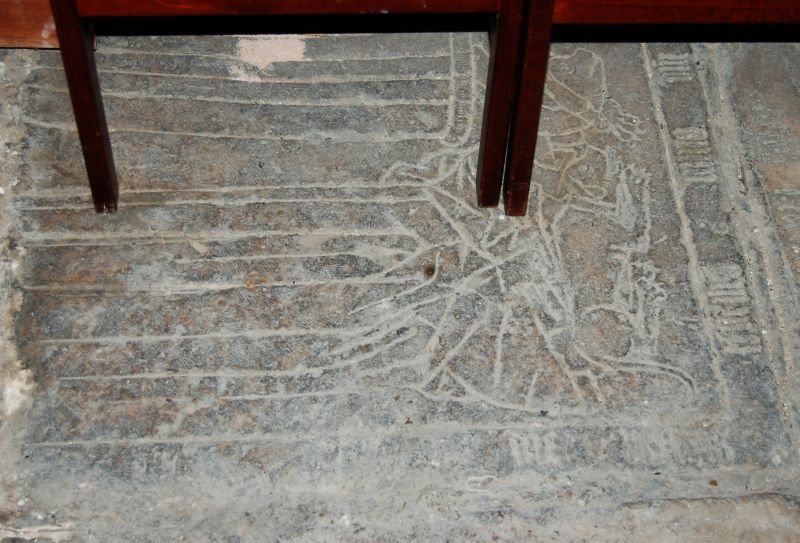 RATCLIFFE ON SOAR CHURCH LANE
SK 42 NE
(north side)
3/52 Church of Holy
Trinity
13.10.66
G.V. I
Parish church. C13, C14, C15, C18, restored 1891. Ashlar,
dressed coursed rubble, some red brick. Lead and slate roofs.
Parapets to nave, chancel and north aisle. Coped gables, single
ridge cross to east chancel. Buttressed, apart from the tower.
Tower with spire, nave, aisles, south porch, north chapel and
chancel. C13 dressed coursed rubble tower with ashlar quoins,
set on a splayed plinth with band over, of 3 stages with bands,
corbel table and single corner pinnacles. Topped with early C14
broach spire with 2 tiers of 4 lucarnes. West side of the tower
has a single C13 lancet with single similar smaller lancet above
and 2 tie plates. North, south and west sides each with single
C13 arched bell chamber openings, each opening with 2 pointed
arched lights and hood mould. East bell chamber with single
pointed arched light and hood mould, evidence of former nave
roof. North aisle is on a low chamfered plinth with further
chamfer extending under the sills. Projecting from the west wall
is a single large stepped buttress. In the north wall is a
blocked round arched doorway. To the left are 2 C18 round arched
windows. Clerestory with 2 rectangular lights. The north wall
of the chapel has a single small lancet with single smaller
lancet in the east wall. The chancel is set on a low chamfered
plinth and has in the east wall a single large C14 arched 4 light
window with geometric tracery, hood mould and continuous sill
band. The south wall has 3 pairs of C13 lancets. To the right
of the left pair is a blocked chamfered arched doorway with hood
mould and decorative label stops. The south aisle is set on a
chamfered plinth with moulded band extending over. The east wall
has a single 3 light arched window with hood mould. The south
wall has 2 C14 arched 3 light windows with cusped tracery, hood
moulds and label stops. There are 2 'S' tie plates. To the left
is the gabled porch, set on a similar plinth, with double
chamfered arched entrance and 2 'S' tie plates. Inner C14
moulded arched doorway with hood mould and C17 stud door. Sides
of the porch with brick benches. The west wall of the aisle has
a single pair of arched and cusped lights. Interior. 3 bay C14
nave arcades, hexgonal columns with moulded capitals, wide
plinths, chamfered and moulded arches, hood mould with single
label stop to south side. Responds consist of moulded capitals,
that to the south east decorated with nail head and further
supported on a carved human head. Double chamfered C13 tower
arch, the outer order supported on colonnettes with shaft rings.
Hood mould and single blocked opening over. Double chamfered
chancel arch, the inner order supported on octagonal responds
with moulded capitals. North aisle/north chapel double chamfered
arch, the north side fore-shortened, the south side supported on
an octagonal respond with moulded capital. 2 bay chancel/chapel
arcade with single circular column and octagonal responds with
moulded capitals, double chamfered arches. South chancel with
C14 tripartite arched and cusped sedilia arches supported on
colonnettes with fillets. To the left is a single arched and
cusped piscina. North chancel wall has a C14 moulded arched tomb
recess arch supported on single colonnettes with fillets. Under
the south west window of the chancel is an ashlar bench. South
aisle, south wall has a pointed arched piscina. Chancel with C13
ashlar altar piece, altar rails with C17 turned balusters. South
aisle with C17 carved altar table. Oak chest with some C17
carving. C14 octagonal ashlar font with C17 cover. Furthr C19
font, remaining furniture C19. The C15 nave, chancel and aisle
roofs with chamfered beams, nave roof also with carved bosses.
In the tower are the remains of 2 C13 ashlar coffins. In the
nace, chancel and south aisle are a number of C18, C19 floor
slabs. The south aisle also with worn C13 floor slab with
incised carved figures. North aisle has 2 similar slabs, one of
a C15 priest, the other of C16 male and female figures. The
north chapel with several similar C15 and C16 slabs including one
of a female figure. C13 floor slab in the chancel and further
floor slab to Ann Darly, 1667. Against the south chancel wall is
the alabaster monument to Henrie Sacheverell, d.l625. There is a
recumbant figure of a kniight with head on a visor, the sides of
the tomb decorated with shields and front with 3 figures of
children flanked by inscriptions and decorative strips. Set into
the wall above are the kneeling figures of his 3 wives, flanked
by Corinthian columns supporting cornice. Over are 2 small
panelled pilasters supporting a round arch with keystone,
containing a shield of arms. Pilasters are flanked by decorative
strapwork. Between chancel and chapel is the alabaster monument
to Henrie and Jane Sacheverell, c.1590, the sides of the tomb are
decorated with figures, shields and strapwork, and it is
surmounted by 2 recumbant figures, he in the attire of a knight.
The alabaster monument to Henry Sacheverell and his wife, 1558,
is decorated around the sides with 17 figures holding blind
shields. The tomb is surmounted by 2 recumbant figures, he in
attire of a knight with feet on a dog. Set into the north wall
of the chapel is an alabaster monument to Ralph Sacheverell and
his wife, 1539, the sides of the tomb decorated with cusped
lozenges containing blind shields, 2 recumbant figures and niche
over. Reveal of niche decorated with carved figures set into
cusped arches, further decorated with cusped blind tracery.
Soffits also decorated with blind tracery.