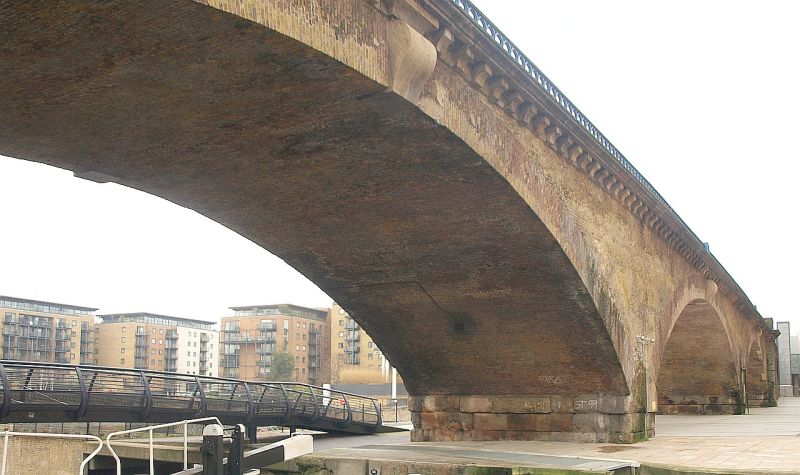 Entry Name: Railway Viaduct to North of Regents Canal Dock Between and Including Branch Road Bridge and Limehouse Cut Up to Three Colt Street

2.
1839. Engineers George Stephenson and G P Bidder. Built as part of the London
and Blackwall Railway, opened in 1840. An early stock brick arcaded viaduct with
console corbelled string below parapet with articulating dies. The Branch Road
Bridge of 2 elliptical keystoned arches. Fine 3 arched bridge over the Grand Union
Canal, the "centre piece" of the Regents Dock sequence of the viaduct, similar but
single arch bridge over the Limehouse Cut. All 3 bridges have heavy ashlar quoining
to abutments, surmounted by pedimental blocking course. Heavy keystones to finely
gauged brickwork of arches, large stone cornice on corbel brackets below parapet.
The Grand Union Canal Bridge has a large arcaded cast iron railing to the parapet.
Listed for railway engineering interest. One of the earliest railways to serve the
docks, before the great railway expansion of the 1840s. The railway was to
revolutionise docking methods and buildings in the 1850s. Built by the famous railway
engineer George Stephenson, this viaduct, with its fine arches, also has considerable
architectural merit.