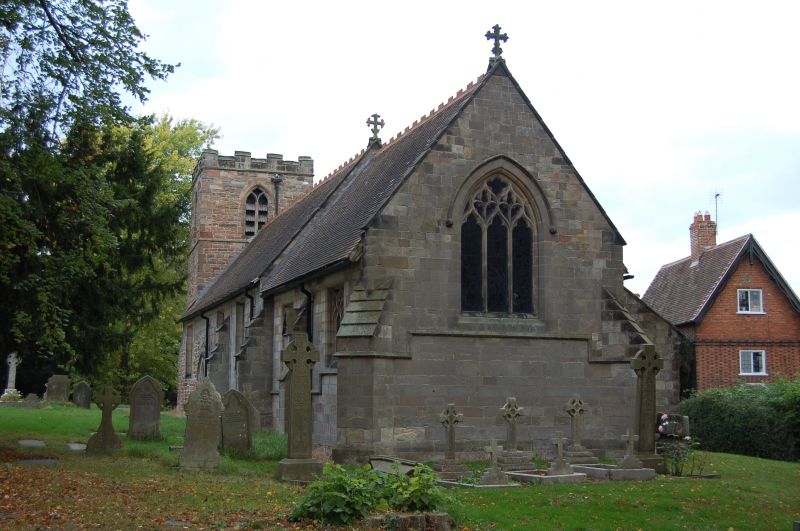 C13 dressed coursed rubble embattled tower set on a low chamfered plinth, of two stages with bands and ashlar quoins. The west and south walls with single C13 lancets, the north wall with single smaller lancet. Four arched two-light bell chamber openings. The north nave wall, of dressed coursed rubble to the west, has a single restored C14 window with three arched and cusped lights under a flat arch. Below is an arched tomb recess commemorating those who died in the 1914-18 war, with a reclining effigy of a soldier. The memorial dates to 1924. It specifically commemorates three soldiers from the area who were killed in action although it is also a memorial to those killed in both the First and Second World Wars. It comprises a recessed sepulchre with a recumbent soldier in uniform lying within, holding a cross to his chest and with his head lying on a pillow and his feet resting on his cap. The arch of the recess is moulded and enriched with carved roses. In the left spandrel is a carved depiction of St George slaying a Dragon, which is itself carved in the right spandrel. There is an inscription carved on the left panel in the back of the recess which reads: IF YE SUFFER FOR/ RIGHTOUSNESS SAKE/ HAPPY ARE YE. The right hand panel contains the three names of the soldiers. The panels are flanked by carved foliate decoration and the regimental badges of the three soldiers which are affixed to the back of the memorial.

The north wall of the C19 chancel has a continuous band forming a sill band to the east and south chancel windows. The east chancel with C19 arched three-light window with cusped flowing tracery, hood mould and decorative label stops. The south chancel has two C19 two-light windows both with cusped tracery under a flat arch, that on the left being larger. The south nave has three restored C15 windows each with two cinquefoil arched lights under a flat arch. To the right of the left window is a chamfered arched doorway with hood mould.

Interior: triple chamfered tower arch. Moulded chancel arch supported on quatrefoil responds with moulded capitals and fillets to the single central shafts. Decorative wrought iron screen under. Moulded organ chamber/chancel arch supported on engaged columns with fillets and moulded capitals. The north chancel wall with two bay aumbry with single central colonnette and two trefoil arches. The south wall has a low ashlar sill to the east window forming a sedilia. Reredos decorated with carved figures, this, the organ case, pulpit, decorated with blind tracery, and similar font are by Street. Remaining furniture C19. Projecting from the south wall of the nave is a stair turret with chamfered arched doorway.

On the north nave wall is a memorial to John Wescomb Emmerton Wescomb, 1838, this has a Gothick surround. That to John Emmerton Wescomb Emmerton, 1823, is set into an arched recess with marble surround and has a sarcophagus below the inscription and a crest over. The memorial to John and Thomas Emmerton, 1745, has an oval inscription tablet surrounded by a garland and with crest over, the apron has a further inscription and the crown a shield. The south nave wall has a bulbous oval alabaster tablet to Winifred Coppindale, 1648. In the south chancel is a good large memorial to Gervase Pigot, 1669, restored 1950. Large rectangular inscription tablet surmounted by a band of shields. Either side are single angels supported on corbels, these hold back curtains over the inscription. Apron decorated with a stylised tree and carved fruit.