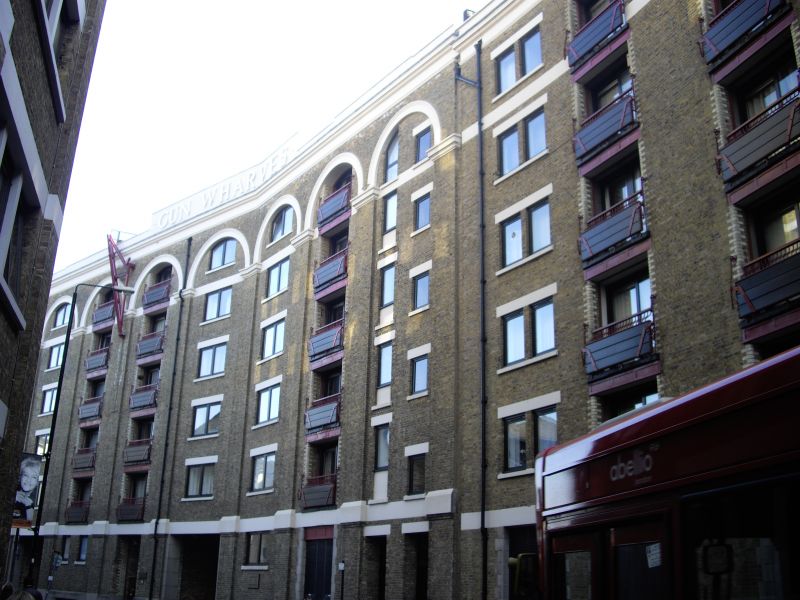 EXTERIOR: The street elevation, of 15 bays, has a deep crowning entablature with moulded cornice and parapet. A panel, above Warehouses A and B, rises from the parapet announcing 'Gun Wharves' in a late C20 script. 124-126 Wapping High Street (Warehouses C and D) have a deep granite plinth and granite faced reveals to ground floor openings and waggon entrances. Some windows have brick 'mullions' and there are three loading bays. 128-130 (Warehouses A and B) are more ornate and the bays are treated as a giant arcade with deep plat band beneath first floor and flush band level with capitals of pilasters. Again, there are three loading bays. Paired iron frame with windows with mullions and lintels. H-section girder hoists; housings for roof mounted cranes. To the riverside, the flat elevation of 13 bays overall is treated as one long giant arcade through 6 storeys with channelled rustication to ground floor piers. The pilasters, coupled in some cases, have fluted necking. There is a deep entablature with moulded cornice, surmounted by name plaques. Three wall-mounted, lattice, jibbed cranes with operating cabins, hydraulic powered. The warehouses were converted to residential use which involved replacement of the windows and the insertion of balconies in the loading bays.

HISTORY: Wapping developed along the northern embankment of the Thames, hemmed in by the river to the south and what was Wapping Marsh to the north, creating a peculiarly narrow and constricted shape, consisting of the axis of Wapping High Street and some north-south side streets. The building of the London Docks to the north and west of the High Street in the 1805 transformed the area from residential to docklands and the population declined as houses were destroyed to build giant warehouses along the riverfront. The site now occupied by Gun Wharves, originally known as Wheatsheaf Wharf, had a warehouse building on it from at least the 1870s. In the 1890s it was called Sharpe's Wharf and in the early C20 it was a paper wharf. A company called Litchfield and Soundry appear to have redeveloped the site in the late 1920s as Gun Wharves. In the 1980s the London Docks were largely filled in and redeveloped with a variety of commercial, light industrial and residential properties. Gun Wharves was converted to residential use at this time.

SUMMARY OF IMPORTANCE: Gun Wharves has special architectural interest as a handsome Thames riverside warehouse of the late 1920s, built with a giant arcade marking the divisions of the loading and window bays. The warehouses close the vista of Wapping High Street as the footprint of the building traces the curve of the street. Along with Warehouses E, F and G and King Henry's Wharves, with which Gun Wharves has group value, the ensemble creates one of the few 'cavernous' streets remaining in Docklands.