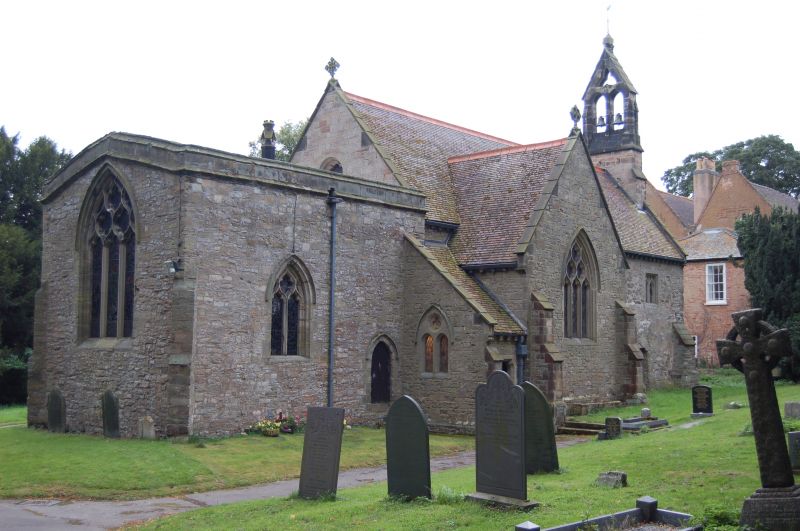 Parish church. C12, C14, C15, extensively restored and organ
chamber rebuilt 1878 by Henry Hall for Lord Belper of Kingston
Hall. Dressed coursed rubble with ashlar dressings. Plain tile
roofs with corbel table to all but the chancel and aisle.
Parapet to chancel and aisle, coped gables with single ridge
crosses to the porch, east nave and north organ chamber. Single
stack to the south east nave. Buttressed. Nave with west
bellcote, south aisle, south porch, north organ chamber, north
vestry and chancel. Gabled C19 bellcote with 2 moulded arches
containing single bells and surmounted by single trefoil. Where
the bellcote rises from the nave there are single small carved
grotesques. West wall of the nave on a shallow plinth with
single arched early C14 3 light window with intersecting tracery
and hood mould. Over is a single C19 sexfoil. The north wall is
on a chamfered plinth and has a blocked C12 doorway with the
remains of zigzag decorated imposts and originally with round
arched tympanum. To the left is a single C12 round arched light.
In the restored C15 clerestory are 3 windows each with 2 ogee
arched and cusped lights under a flat arch. In the apex of the
east nave is a single quatrefoil. To the left is the projecting
organ chamber with single arched C19 3 light window with
reticulated tracery and hood mould in the north wall. Adjacent
is the C14 damaged ashlar coffin. Further left and set on a
chamfered plinth is the C19 vestry with Caernarvon arched doorway
in the north wall and a single arched 2 light window with plate
tracery and hood mould in the east wall. The north chancel has
an arched doorway with hood mould, to the left is a single C14
arched 2 light window with reticulated tracery and hood mould.
The east wall has a single similar 3 light window with hood
mould. The south wall has a single similar 2 light window with
hood mould. To the right is a projecting lead sundial and to the
left a single early C14 2 light window with Y tracery and hood
mould. The east wall of the south aisle has a single restored
C15 arched window with single transom, having 2 cinquefoil lights
above and below, cusped panel tracery, hood mould and decorative
label stops. The south wall is set on a chamfered plinth, under
the parapet extends a band terminating in single small carved
grotesques. There are 3 C19 ashlar cross windows with cinquefoil
arched lights above and below the transoms. To the left is the
gabled C19 porch set on a chamfered plinth. Moulded arched
entrance with double door, hood mould and label stops. Over is a
single lozenge panel containing a single quatrefoil and shield.
The west wall has a single trefoil arched light. Inner
chamfered and moulded arched doorway, the outer moulded order
supported on a single pair of colonnettes. To the left is a
single similar C19cross window. The window in the west wall of
the aisle corresponds to the east window of the aisle. The C19
clerestory has 5 shallow recessed panels, the 4 on the right each
with single window with 2 ogee arched and cusped lights under
flat arches. Interior. 5 bay C14 nave arcades with octagonal
columns and responds, moulded capitals and double chamfered
arches. Double chamfered nave/organ chamber arch, the inner
order supported on octagonal responds. Similar chancel arch.
The south chancel wall with arched and cusped piscina. The north
wall with an arched and cusped tomb recess containing the C14
effigy of a lady with head under a trefoil arch and crocketed
hood mould over. C19 reredos with blind arcading and decorative
carving. South aisle, south wall with arched piscina. North
wall of organ chamber with arched tomb recess containing the C14
effigy of a man with head supported by 2 angels under a nodding
ogee, cusped and crocketed arch with finial. South aisle/south
wall with arched tomb recess. The C13 effigy has a dogtooth arch
over the head. 2 C17 benches. South aisles with C16 table with
turned legs. C19 octagonal font with decorated quatrefoil
panels. In the nave and aisle are several C16, C17 and C18 floor
slabs. The north nave wall has a memorial to Richardus
Mansfield, 1624. The inscription, flanked by 2 shields, those to
the left now missing. 2 pilasters and fluted brackets support a
broken pediment containing decorative shield. The north chancel
has a memorial to Robertus Hemington, 1774. The inscription is
surmounted by an urn. That to Edward Ellis, 1795, has a pediment
over the inscription. On the east chancel wall is a memorial to
T. H. Hastings, 1804 by Peck of Loughborough, with a reeded
surround to the inscription, apart from the apron which is
decorated with a shield. The crown topped with an urn. The
south wall has a good memorial to Thomas Mansfield, 1742 , with a
surround of cherubs, swags, shields and skull and topped with a
portrait bust. There is a further memorial to Thomas Mansfield,
1706, the inscription tablet is flanked by single Corinthian
columns which support an open and broken segmental pediment
enclosing a single shield.