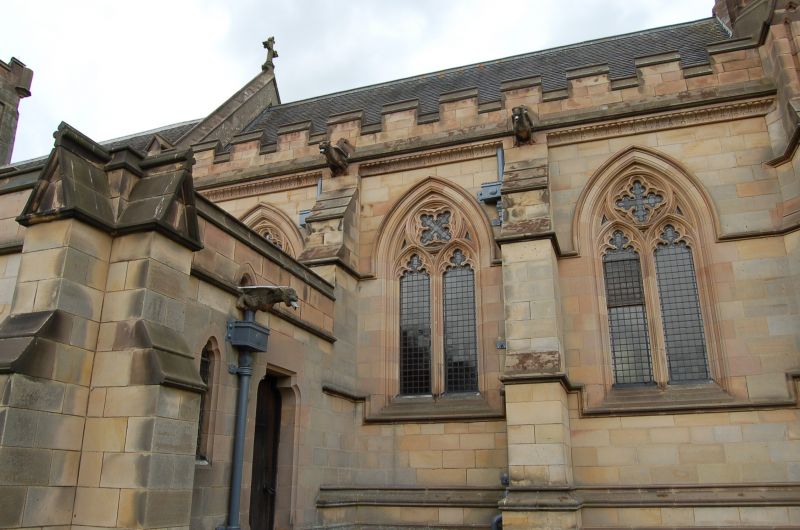 WIDMERPOOL OLD HALL DRIVE
SK 62 NW
(north side)
6/143 Church of
1.12.65 St. Peter and
St. Paul
G.V. II*
Parish church. C14, virtually rebuilt 1888-95. Ashlar. Plain
tile and lead roofs. Single stack to north chancel. Coped
gables with single ridge crosses to east nave, east chancel and
north organ chamber. Buttressed and set on a moulded plinth.
Tower, nave, aisles, south vestry and porch, north organ chamber
and chancel. Single stage angle buttressed embattled C14 tower.
Angles of embattlements with evidence of single former pinnacles.
Single gargoyle to each side. West side with attached stair
turret with single light. To the right is a C14 arched 3 light
window with flowing tracery. Above are 2 rectangular lights.
The north and south sides have single rectangular lights. 4 two
light C14 bell chamber openings with mouchettes under flat
arches. North aisle, with parapet to the single west/right
slightly projecting bay, has in the north wall a single 2 light
window with cusped tracery under a flat arch, to the left are 4
arched 2 light windows. In the clerestory are 4 pairs of
quatrefoils. To the left is the projecting organ chamber, the
north wall with 2 arched windows each consisting of 2 blind
trefoil arches containing single shields surmounted by decorative
bands and 2 arched lights with cusped tracery, hood mould and
label stops. The sill band continues around the chancel. Over
is a single decorative quatrefoil. The east wall has 2 tall
trefoil arched lights. A single flight of steps lead down to a
Caernarvon arched doorway with 2 similar lights to the left. The
chancel, embattled to the north and south with decorative band
extending under has in the north wall 2 arched 2 light windows
with cusped tracery, there is a single gargoyle. Over the
windows is a continuous hood mould which extends around the
chancel, single label stop to right. The angle buttresses of the
east chancel terminate in single large crocketed finials, there
is a single arched 3 light window with cusped tracery. Each
light is divided by a single colonnette with outer single similar
colonnettes. Ogee arched crocketed hood mould with decorativfe
label stops and single finial. In the apex are 3 niches divided
by single pilasters terminating in single crocketed pinnacles.
Each niche contains a single figure. Further foliate decoration
and blind tracery. Single carved grotesques at springing of
gable. The south wall with 2 gargoyles has 3 similar windows to
those of the north chancel. Projecting from under that on the
left is the vestry with parapet. In the east wall is a
Caernarvon arched doorway with single trefoil arched light to the
left and single gargoyle. The south wall has 3 similr lights and
the west wall a single gargoyle. The south aisle has 3 arched 2
light windows with hood moulds and label stops. The porch is
embattled to the east and west with single gargoyles. The angle
buttresses terminate in single large crocketed finials. Moulded
arched entrance supported each side on 2 colonnettes, ogee arched
crocketed hood mould with decorative label stops and finial.
Over the finial and set into a crocketed niche is a single carved
figure. The wall decorated either side with blind tracery,
extending under and flanking the base of the figure are single
crocketed bands with inscription below. The side walls each have
single trefoil arched lights. Interior with quadripartite
vaulted roof with single boss and 4 decorative stops. Inner
moulded arched doorway supported each side on single colonnettes.
The aisle to the left of the porch with parapet and single 2
light window with cusped tracery under a flat arch. The
clerestory corresponds to the north. Interior. 4 bay C19 nave
arcades with octagonal columns and responds, moulded capitals
alternate with foliate decorated capitals, double chamfered
arches with hood moulds and decorative label stops to the nave
side. Tower/south aisle, north aisle and nave double chamfered
arches, the inner orders supported on corbels. North aisle with
decorative iron screens. Moulded south aisle/vestry arch part
blocked and with Caernarvon arched doorway with flush ashlar
quoin surround. North aisle/organ chamber moulded arch supported
on single pair of engaged colonnettes with moulded capitals, open
traceried wooden screen. Moulded chancel arch, supported each
side on 4 colonnettes with foliate capitals and shaft rings.
Vaulted chancel roof with decorative bosses supported on compound
piers with shaft rings and foliate decorated capitals. Moulded
chancel/organ chamber arch. Chancel windows with ashlar and
marble nook shafts with some open tracery over. Under the single
central window on the south side and the single window opposite
on the north side are open traceried ventilators. Carved ashlar
reredos. Organ case decorated with opoen tracery and carved
angels. Open wooden traceried pulpit on ashlar base decorated
with tracery and foliate. Circular ashlar font decorated with
quatrefoil panels and supported on colonnettes. 8 decorative
iron lamp brackets. There is a memorial in the form of a
sarcophagus to Catherine Allen, 1837, by Hall, Nottm. In the
westernmost bay of the north aisle is the marble memorial to
Harriet Annie Robertson, 1891. The decorative tomb is surmounted
by a recumbant female figure in contemporary dress which falls
over the side of the tomb, the head is supported on several
pillows. Tomb inscribed "G. F. Florence 1894". There are
further C19 memorials and set on to a pedestal is a carved female
bust. Decorative nave roof.