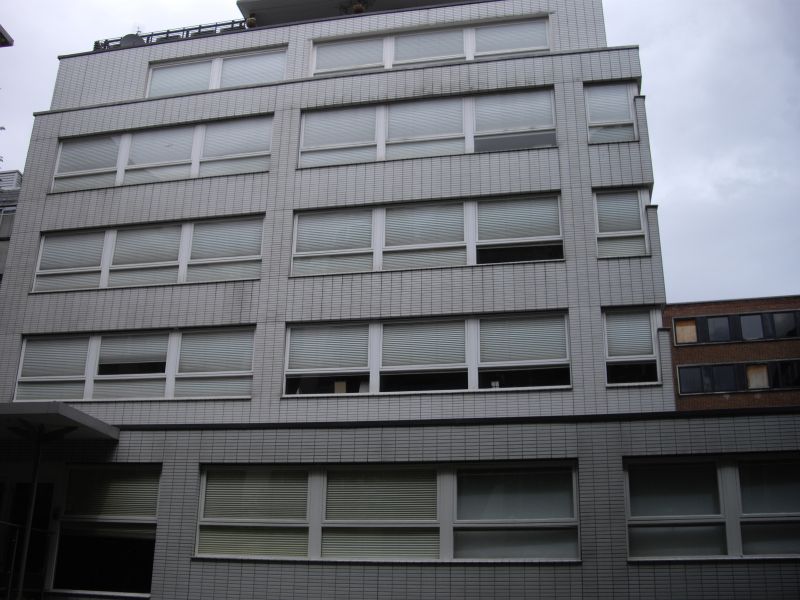 Offices, 1961 by Yorke, Rosenberg and Mardall as their own headquarters, with a penthouse flat for senior partner FRS Yorke. Now offices on lower two floors with flats above.

PLAN: the building occupies a small plot enclosed by narrow alleyways (Greystoke Place and Mac's Place) to the north and east, with the former St Dunstan's churchyard to the south. It is of six-storeys, comprising a broad two-storey podium and a set-back four-storey tower, the top storey set back still further to form a penthouse. The original main entrance is on the north side, from Greystoke Place: an external flight of steps leads directly to the first-floor lobby; adjoining which are the stairwell and lift shaft. The original layout comprised clerical and secretarial offices at ground level, two large drawing offices on the first and second floors, partners' offices on the third and fourth floors, and FRS Yorke's flat in the fifth-floor penthouse. In the present arrangement, the lower two floors remain as offices while the second through fifth floors are now flats. The principal entrance is now from the churchyard to the south, via a new doorway and steps installed c.2005; the north entrance remains, but this and the stairwell and lift now mainly serve the flats.

EXTERIOR: the use of white facing tiles - a clean, mechanical alternative to the tougher exposed brick and concrete surfaces of the 1950s - was a new phenomenon in British architecture, and was to become a signature of YRM's commercial work. The architects were determined to use the tiles uncut, and the dimensions of a standard tile thus fix the proportions of the building as a whole. Similar tiles form projecting cills to the window openings. The windows themselves are double-glazed timber casements (now painted white) arranged in horizontal bands. Those on the north and south elevations have centrally-pivoting upper lights with integral blinds. On the more formal south elevation they are arranged in two groups of three, thus creating a bipartite division in both podium and tower; an additional single window to the right wraps round the Mac's Place elevation as a continuous glazed strip. The penthouse windows above are tall horizontally-sliding sashes. The present south entrance with its steps and canopy was installed c.2005, replacing an earlier window; the black metal railings to the right are original. The old main entrance from Greystoke Place is reached by via an external flight of steps with green terrazzo treads, and is sheltered by a tile-clad concrete canopy; the stairwell above is lit by a series of horizontal slit windows.

INTERIORS: the principal internal feature is the stair, which is square on plan with the lift-shaft occupying the central well. It has floating treads of green terrazzo cantilevered out of a ranking concrete beam, and tubular steel handrails painted black. The uppermost flight, leading to the penthouse flat, has treads of yellow terrazzo. The lift shaft is glazed to the sides and rear with black-painted doors and metalwork.

The ground and first floors are still in use as offices. These are large open-plan spaces, with smaller areas partitioned off as meeting rooms, kitchens etc. Most of the internal features here, including the partitions and the stair connecting the two office floors, are recent insertions and are not of special interest. The ceilings are of exposed concrete with reinforcing beams supported on pilotis. The upper floors are now private flats, and could not be inspected; the penthouse, built as FRS Yorke's own flat, may contain features of interest.

SUBSIDIARY FEATURES: the building was designed to be seen across the enclosed green space of the former churchyard to the south, and the latter's C19 iron railings and stock-brick plinth walls and gate-piers are important framing elements.

No. 2 Greystoke Place was designed by the firm of Yorke, Rosenberg and Mardall (YRM) as their own headquarters, and served as a flagship for the practice's increasing specialisation in office work. The plot adjoins the former churchyard of St Dunstan in the West, which provided the only access to the site; despite this, building work (carried out by Messrs Trollope and Colls under job architect Beryl Hope) was completed in the exceptionally short time of ten months from initial excavation to final completion in December 1961. The top floor of the building contained a penthouse flat, occupied by the firm's senior partner FRS Yorke for the short period before his death in 1962. The building received the RIBA Bronze medal for 1961; the RIBA President Sir William Holford, presenting the award, described it as 'an oasis of quality in the midst of quantity'.

The former offices of YRM at No. 2 Greystoke Place are listed at Grade II for the following principal reasons:
* Architectural interest: a flagship building designed by and for a noted firm of post-war architects, exceptionally well detailed and making skilful use of materials;
* Setting: a sensitive integration of a frankly modern office building within an ancient street pattern, relating unusually well both to the narrow alleyways to the north and to the former churchyard with its retained boundary walls and railings to the south.