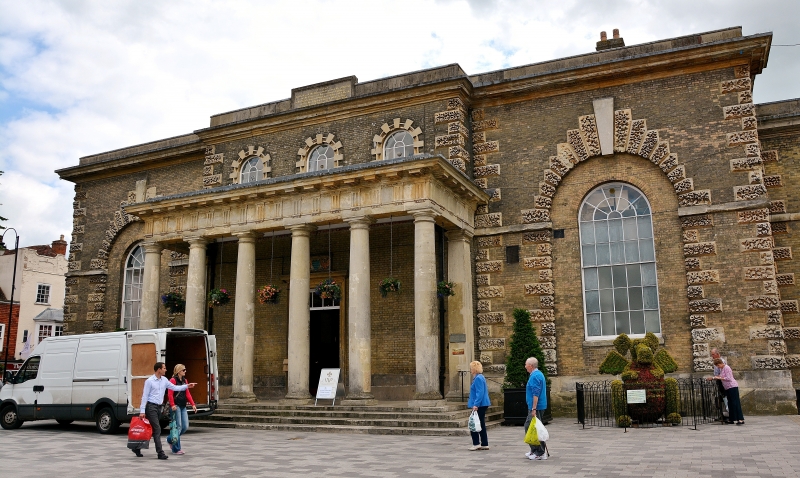 MARKET PLACE
1.
1594 (Ox Row)
The Guildhall
SU 1430 SW 1/299
SU 1429 NW 3/299
SU 1429 NE 4/299 28.2.52.
II*
2.
Designed by Sir Robert Taylor and built with some alterations by William
Pilkington in 1788-95. Principally of 1 storey over basement. Part in centre
of 2 storeys.
A symmetrical front of white brick on projecting ashlar stone base, with
stone string at springing of main window arches. Wide stone cornice with
enriched soffit and stone blocking course. Hipped slate roof. The main
front now consists of a central block with a slight projection and a hexastyle
Doric stone portico with triglyph frieze and moulded cornice, standing on
a wide stone landing, approached by 4 steps across whole width and return
at each end.
Large central 6-panel double door under portico in surround of moulded stone
architrave and cornice, with City Arms in panel over cornice. 3 arched 1st
floor windows in main wall over portico with stone architrave surrounds and
radiating voussoirs.
The central block is flanked by a very tall arched window at each side, et
in an arched recess with a surround of projecting and vermiculated bonded
stone work, voussoir arch with tall ashlar keystone, very large scale. The
portico was originally placed centrally on the West end of the building.
It was removed later and rebuilt on the north side. Its original position
now filled by a projecting section with one window to the north and 3 to
the west, of similar general design but simpler cornice.
The front to Queen Street is similar but with a large central bow of 3 windows.
Front to Butcher's Row generally similar. Fine reception room on east side,
whole length of the east front, with original decoration, restrained plasterwork.
The centre of building is the staircase hall with a glazed round lantern,
divided from entrance hall by a screen of Tuscan columns. In te hall a reset
Elizabethan fireplace.