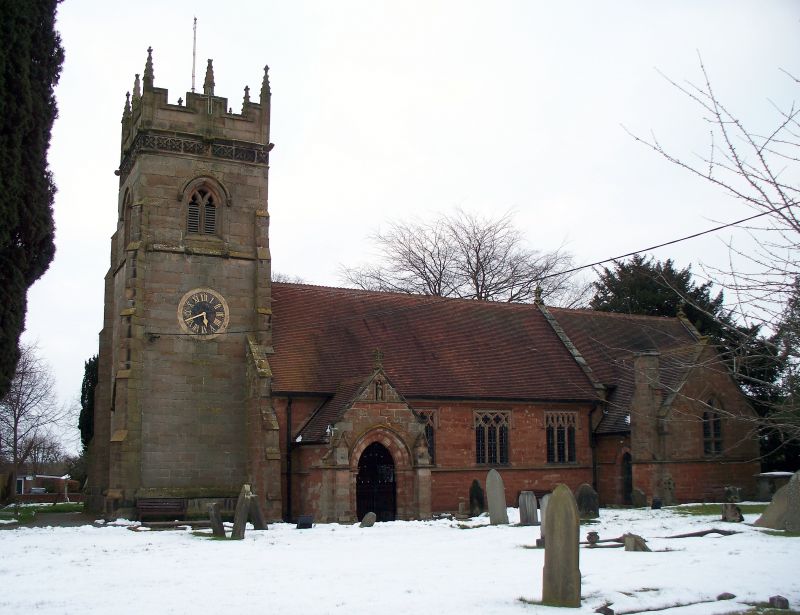 II*
DATES OF MAIN PHASES, NAME OF ARCHITECT: parish church mainly of late C15-C16, much altered before restoration in 1887 by J.L Pearson.

EXTERIOR: the Perpendicular three-stage tower has diagonal buttresses, and a frieze of cusped saltire crosses (characteristic of Staffordshire towers) below the embattled parapet with pinnacles. The three-light west window has hood mould with head stops. In the second stage are narrow openings, with early C19 painted clock face on the south side. The belfry has two-light openings with louvres. The nave is Tudor-Gothic style. The north wall was re-faced in 1887 and has restored C16 one-light and two two-light windows. In the west wall is a window blocked when the tower was built. The south wall is entirely of 1887 and has three three-light square-headed windows. The buttressed porch has an entrance with double-chamfered arch on polygonal responds.

The shallow-projecting north chapel is Tudor Gothic and has two square-headed three-light windows with cusped lights. The Early English style chancel has buttresses with attached slender shafts. The east end has three stepped lancets with linked hoods and ringed shafts to subsidiary blind arches. There are two south lancets and one on the north side. The gabled vestry has a three-light geometrical south window and external stack.

INTERIOR: The tower arch is C14 with polygonal responds. The wide Early English chancel arch is C19. Also C19 are the roofs, of which the eight bay arched-brace nave roof and similar four bay chancel roof have windbraces. The two bay north chapel arcade is also 1887, Early-English style with central pier of four clustered shafts and foliage capital. Sedilia on south side of the chancel are window seats.

Walls are exposed stonework. In the north wall is a blocked straight-headed doorway. Shallow niches in the north wall were associated with a former wall painting of George and the Dragon discovered in 1887: they may have held lit tapers that represented fire from the dragon's mouth. Floors are tiled, with decorative tiles in the chancel by Godwin of Lugwardine copied from medieval tiles in the chapel, and with parquet floors below pews.

PRINCIPAL FIXTURES: The slender Gothic font with octagonal bowl was remodelled in 1899, but is probably C18 in origin. Benches have square ends with two fielded panels. Choir stalls have poppy heads and arm rests. The Caen stone pulpit has polished Irish red marble shafts and blind tracery. The reredos, designed by Pearson and made by Nathaniel Hitch in 1896, is also Caen stone with relief panels showing the life of Christ. It is flanked by three niches with figures of martyrs, designed by W.D Caröe and made by Nathaniel Hitch in 1910.

The principal memorial is an incised grave slab of Nicholas Gravinor (d 1520), now on the east wall of the north chapel, showing a tonsured priest who began the rebuilding of the church. In the chapel west wall is an oval tablet to Randall Darwall (d 1777) and family.

There are fragments of C16 stained glass in the chapel north west window. Most of the stained glass is by A.J Dix of London and made between 1887 and 1920. In 1904 he also embellished the earlier east window by Gibbs & Howard (1887). In the north chapel is SS Columba, Chad and Augustine (1887). In the nave are two war-memorial windows by Dix (1920), showing the last communion before battle, and a Roman centurion with Joshua, leader of Israel. Another war-memorial window, by H. Doyle (1946), shows an RAF pilot, Flying Officer Clement Royds (d. 1945), carried up to heaven from his burning fighter.

HISTORY: There is some evidence of a C12-C13 church in the nave west wall, and the tower arch shows that a tower was added in the C14. The present tower, the north chapel and the windows on the north side of the nave survive from a programme of works initiated by Nicholas Gravinor (rector 1489-1520). The remainder of the church had been rebuilt in the C18, with early C19 additions, but was taken down and replaced in the restoration of 1887 by John Loughborough Pearson (1817-97), the renowned Gothic Revival architect. Pearson kept the Tudor-Gothic style for the nave but chose to build the chancel and vestry in Early-English style.
SOURCES:
M. Cooksley and M. Elton, A Guide to the Parish Church of St Giles, Haughton, 1997.
N. Pevsner, The Buildings of England: Staffordshire, 1974, p 143.
Incorporated Church Building Society Archives.

REASONS FOR DESIGNATION: The Church of St Giles, Haughton, is listed Grade II* for the following principal reasons:
* For the extent and quality of its medieval fabric in the nave, north chapel and especially the fine west tower.
* It retains a significant C16 memorial, and a good sequence of stained glass.
* The church was well restored in 1887 by J.L Pearson, one of the most respected Gothic-revival architects.
* It retains good interior detail of the late C19 and early C20, including reredos and stained glass.