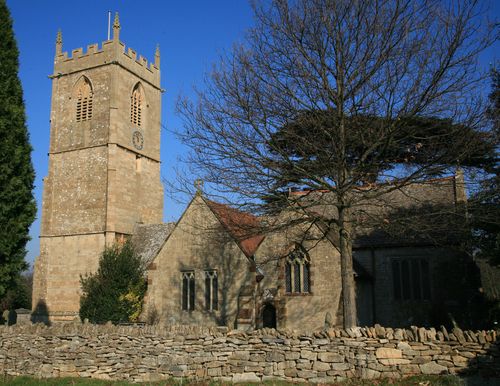 MATERIALS: Limestone, laid as rubble to the nave north wall, but otherwise freestone, red and grey sandstone dressings to the work of 1886; graded stone-tile roofs to nave and chancel, clay-tile roofs to vestry and chapel, porch with combination of both.

EXTERIOR: C12 Norman work is visible in the north wall of the nave, where there are 3 reinstated round-headed windows, one with rope moulding around the head. The south doorway has an unusual re-cut tympanum of a cross surrounded by 8 whorls. Other than that the nave has a 2-light Decorated north window and square-headed window at the east end. The nave south windows are of 1886. The north porch is dated 1639. Its entrance is timber-framed with segmental arch under a closed king-post truss. The Perpendicular 3-stage tower has diagonal buttresses, embattled parapet and corner pinnacles. It has a 3-light west window of cusped lights, and straight-headed south doorway. The second stage has a small square-headed east window, and 2 clock faces, below 3-light belfry openings. The Perpendicular chancel has diagonal buttresses, 3-light east window, 4-light square-headed south and 3-light square-headed north windows. The north window incorporates the initial `S' in the label. The west wall of the chancel, above the nave, is timber-framed with small trefoil-headed windows, part of the 1886 restoration. The south chapel is buttressed, with 1886 foundation stone, and has windows with ogee-headed lights. The adjoining organ chamber, under a separate roof, has a 3-light south window with reticulated tracery. The north chapel has a 2-light Decorated east window.

INTERIOR: In the nave is a 3-bay arched-brace roof and C15 4-centred tower arch. The chancel arch is composed of wooden arched braces on foliage corbels, below a collar beam. The chancel has a trussed-rafter roof. A 2-bay south arcade of alternating red and grey sandstone courses, has a central pier of 4 clustered shafts with foliage capitals and hollow-chamfered arches. Organ chamber and north chapel have similar polychrome arches, the latter with round pier. Walls are light-brown render, except for the exposed stonework of the east wall and the tower base. The embrasure of the north-east nave window is painted with flowers. There are C19 tiles, with raised wood floors below benches, and richer decorative tiles in the chancel and around the font. C15 tiles are in the south-east corner of the sanctuary.

PRINCIPAL FIXTURES: The C15 octagonal font is on a round stem. Benches have edge moulding and scrollwork to arm rests. Choir stalls have poppy heads. The polygonal pulpit has Gothic panels. The sanctuary has a dado with Gothic and linenfold panelling. The wooden reredos, under Gothic canopies, has scenes from the life of St Peter and the Ascension, by Richard Haughton (1900). A tablet, with female mourner leaning on an urn, is to Thomas Shekell (d 1809), probably by Lewis of Cheltenham. Medieval glass fragments are in the nave south window. The east window shows the Transfiguration, Passion and Resurrection, possibly by C.E. Clutterbuck (1848). Chancel west windows have angels playing musical instruments, by William Pearce Ltd. Other windows are by James Powell & Sons (1886-88).

HISTORY: The nave has a C12 core. The tower was added in the early C15, and later in the same century the chancel was enlarged at the expense of the Savage family of Elmley Castle, whose initial is found above the north window. The porch was built in 1639. There had been some rebuilding of the nave in 1836 but the character of the building is now dominated by the thorough restoration of 1886 by William White (1825-1900), architect of London. White remodelled the nave, added the south aisle and north chapel, although did little to the tower and the east end of the chancel: the banded masonry, both external and internal, is the clearest evidence of his work.

REASONS FOR DESIGNATION: The church of St Peter, Little Comberton, is listed at Grade II* for the following principal reasons:
* For the surviving C12 features, including tympanum and window head.
* It has well-preserved Perpendicular tower and chancel.
* It has interior features of interest, including C15 tiles and medieval glass fragments.
* White's 1886 restoration adds an extra layer of interest, with its unusual polychrome coursing and arcade piers.