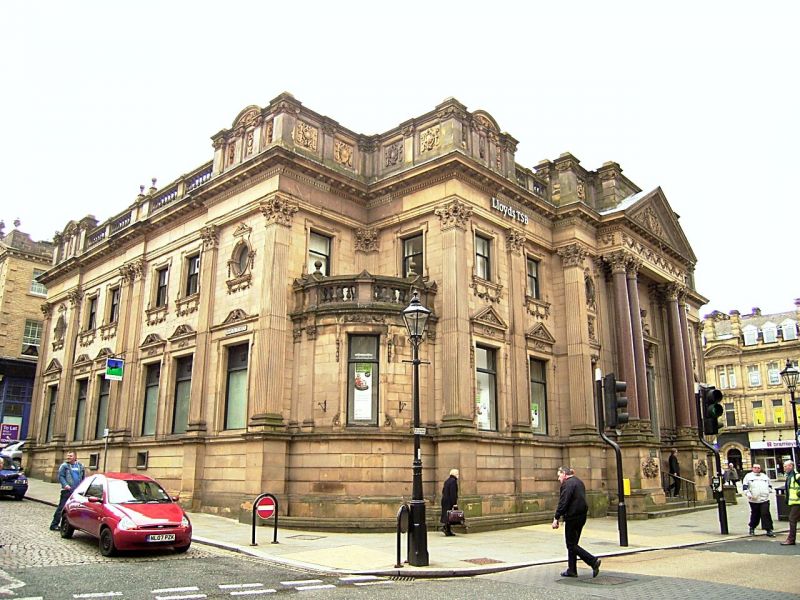 COMMERCIAL STREET
1.
1164
(West Side)
SE 02 NE
SP/147 Lloyds Bank
II
2.
Bank. Dated 1897 for the Halifax and Huddersfield Union Bank by Horsfall and Williams.
Ashlar sandstone with slate and glass roof. Offices on two floors to either side of
full height banking hall. Rusticated plinth and moulded string course at cill level.
Entry has eaved architrave in marble with console above and ornate carving of cherubs
and an oval window all flanked by paired columns in polished red granite with Corinthian
capitals rising from plinths with lions head decoration and supporting pediment which
encloses Halifax arms subscribed with the date 1897. Narrow windows to either side
with oval windows above and giant Corinthian pilasters complete central part which
breaks forward from two further bays neither side each comprising window with eaved
architrave and pediment with festooned window above flanked by giant Corinthian
pilasters. Parapet decorated with the "holy face" and balustraded in part. Single-
storey quadrants with one window and one in each return elevation above link facade
with side elevations which have central pair of giant Corinthian pilasters, paired
windows to either side with eaved architraves and scroll pediments and festooned windows
above. Further bay to either side flanked by pilasters, single window as before with
festooned oval window above. Rear elevation plainer, has two large triple windows with
large semi-circular window over to light banking hall. INTERIOR:Hall has ornate
plasterwork by T Cordingley of Bradford. Four pedimented doorways to either side
between giant Corinthian pilasters. Modillion cornice with coved ceiling to meet glass
roof carried on plastered iron ribs.