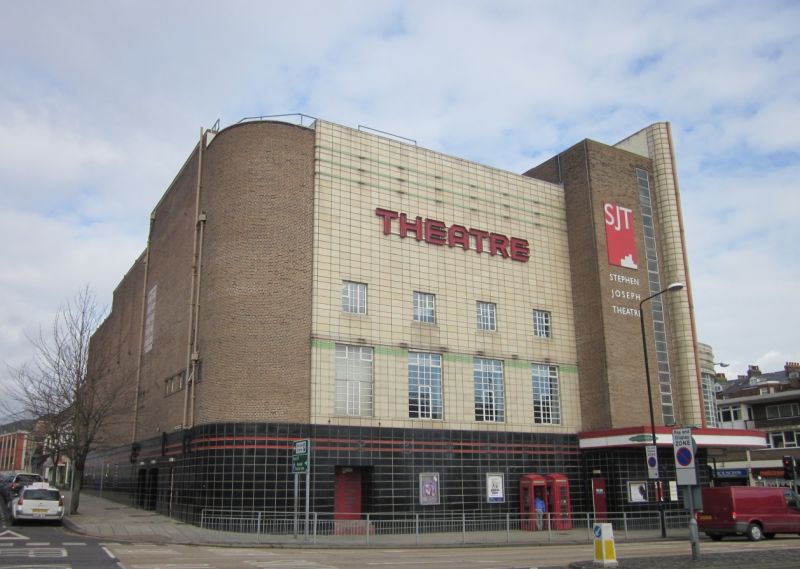 Church of England Parish: Scarborough St Saviour with All Saints

Incorporates Nos 4-12 even, Northway. Cinema with cafe and shops. 1936 by J Cecil
Clavering and Robert Bullivant of Harry Weedon's Birmingham practice, for Oscar
Deutsch, owner of the Odeon chain. Brick with ceramic tile facings to ground floor,
cafe and projection end. Flat roof not visible. Modernist streamlined style based
on German examples. Quadrant corner entrance has 4 glazed doors with overlights
under a fascia and flat canopy extended to left. Quadrant - shaped cafe above
entrance has a completely glazed wall, with steel uprights and close horizontals,
under a tall cream - tiled parapet. The Westborough front to left has a black-tiled
ground floor with display frames and inset left doorway. Above the extended canopy
rises a 6 - storey tower sandwiching a red-striped cream - glazed fin which rises
above the tower roof to hold the legend CINEMA (now removed). Left of the fin a
fully-glazed stairshaft. To left of tower a 5-storey 4-bay section, cream-tiled
above the ground floor, has large first-floor and small second-floor windows with
close-set steel glazing bars. Upper floors blank but for legend ODEON in
free-standing letters (now removed) and green tile bands above. Quadrant left angle
in brick. Northway front shows a 3-storey five-bay block with shops below (most
retaining some original glazing) and horizontally-barred windows above. Behind this
the body of the auditorium descends in 3 wide steps from the tower to the north end.

Interior: All the architectural features and most-of the fittings remain including
doors, architraves and skirtings, panelling, handrails, much of the seating, some
floor coverings including original carpets; light fittings anti original house
telephones. Wide, uncluttered austere auditorium relies for its effect on subtle
shifts of lines but has bands and panels of cast leafy ornament around the screen
area. Historical note: This Cinema is of interest as a good example of the Odeon
"house style" mainly developed by Harry Weedon's firm, and instantly recognisable.
It is now of special importance as the only remaining major Odeon with its auditorium
in the original, undivided state.