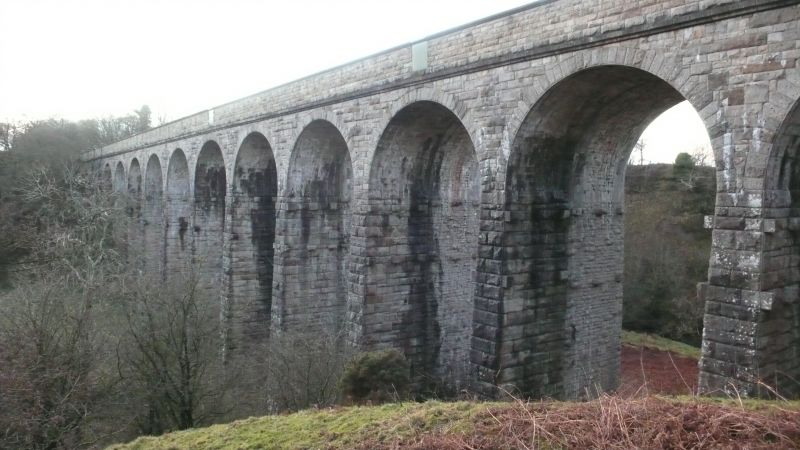 The asset was previously listed twice also under List entry 1096036. This entry was removed from the List on 23 November 2016.

This list entry was subject to a Minor Amendment on 2 November 2016.

Railway Viaduct. Built in 1861, widened 1889, for the South Durham and Lancashire Union Railway (North-Eastern Railway) to span the valley of the Ladthwaite Beck. Engineer Thomas Bouch, contractors Chambers and Hilton. Opened as a single line structure in August 1861, and doubled in width in 1889. Constructed of snecked and coursed squared rubble sandstone, with rusticated voussoirs and finely jointed ashlar soffits. The south-east line is of larger block than the north-west. A straight viaduct, 466 feet in length, and incorporating 11 semi-circular headed arches, each 30 feet wide. The Viaduct is 84 feet high at its tallest point, and is carried by tall, tapered rectangular piers, with 2 rows of corbels at the heads of the piers formerly used to support constructional formwork for the arches. Parapets rise from moulded courses above arch heads and terminate at plain ashlar parapets. Splayed abutments with shallow pilasters to side walls, terminating at rectangular upstands With shallow pyramidal caps. At the time of widening, refuges of unusual design were created in the thickness of the walls, and shielded on the outsides by cast-iron plates shaped to the profile of the copings. There are 4 such refuges on the south-east side, and 3 to the north-east. A dramatically set viaduct by a notable bridge engineer, of particular interest as an example of a widened structure, the 2 phases displaying different constructional characteristics.