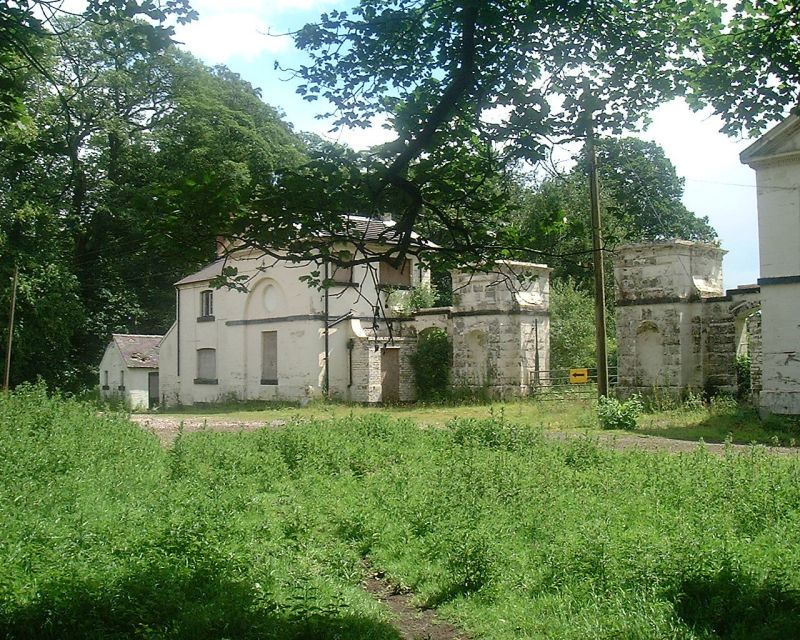 The Monument Lodges, gatepiers and screen by Joseph Pickford of Derby, built around 1775.

The Monument Lodges, gatepiers and screen by Joseph Pickford of Derby, built around 1775.

PLAN: the structure comprises gate piers, a screen, lodges and flanking extensions. Two large, square gate piers are on either side of the road with a screen with arched pedestrian entrances attaching the piers to two lodges. C19 extensions have been added flanking the lodges.

EXTERIOR: the lodges are Palladian in style with each having a dentilled pediment and a large, round-arched recess containing and a blind occulus above a six-over-six sash window. A string course runs at first-floor level, continuing across the screens and the gate piers. The string course acts as coping to the screens and is raised over the segmental arch of each pedestrian gateway.

The gate piers are large in proportion to their accompanying lodges. Each has a niche, a panel above the string course and a moulded cap.

The mid-C19 extensions flank the lodges. They do not continue the Palladian architectural style, instead being of Victorian domestic style. Having a single-storey outshut to a main two-storey building, the extensions roughly mirror each other, but the fenestration size and arrangement differs, as does the location of the chimneys. Both have casement windows.

Trentham Hall and gardens were established on the site of an Augustinian priory in the C16. The property was bought by wool merchant James Leveson in 1540 after the dissolution of the priory. Over the following 360 years under the Leveson-Gower family ownership, the house and grounds were redesigned multiple times. A new mansion was built for Sir Richard Leveson in 1630-1639 and walled gardens created. The park was remodelled in the 1690s for Sir John Leveson-Gower, and a pair of canals cut c1695 to Rev George Plaxton’s plan. In 1707 the hall was redesigned by William Smith of Warwick. The 2nd Baron Gower commissioned Charles Bridgeman to extend and improve the land in 1720 including enclosing Kings Wood, constructing a brick wall around the park and creating a patte d’oie the west of the house, some of which remains. Trentham Hall was remodelled again in 1737-38 by Francis Smith of Warwick. A further overhaul of the landscaping was undertaken in the mid-eighteenth century by removing the walk between the two canals to create a lake. The shape of the lake was naturalised and planting added to the bank by Lancelot Brown between 1759 and 1780. At this time, the hall was redesigned by Henry Holland. Charles Heathcote Tatham designed the mausoleum on Stone Road in 1808 and added east and west wings to the south front of the hall; his orangery survives at the south-west of the remains of the hall.

Another large transformation of both house and grounds took place in the early-nineteenth century under the commission of the 2nd Duke of Sutherland and his wife, Harriet (née Howard). In 1834-1842, Charles Barry redesigned the hall, rebuilding Tatham’s dining room, adding a Belevdere tower over the old kitchen, and building an orangery, sculpture gallery and clock tower. Barry went on to rebuild the stables and service quarters in 1840-49. The design of the Italianate formal gardens is also attributed to Barry, formed of two shallow terraces leading down to the lake with parterres and balustrading, statues, urns, pavilions and fountains as features. Planting would have been led by the head gardeners at Trentham, including George Fleming from 1841 and later Zadok Stevens. The gardens were showcases of innovative Victorian planting and use of colour under Fleming’s management.

Trentham hall was demolished in about 1911 but remains of its entrance and conservatory, orangery and sculpture gallery and stable block survive. The entrance lodges to Trentham Gardens were relocated from the west entrance of the hall to their present site opposite the mausoleum in the 1920s. This was to be the main entrance for Trentham Gardens in their use as public pleasure grounds. The various structures built for entertainment in the C20, such as the tennis courts, ballroom and open-air swimming pool have since been demolished. In the early C21, the flower garden on the upper terrace was historically recreated and the parterre garden to the south was redesigned as a modern scheme by Tom Stuart-Smith and Piet Oudolf, being completed in 2004.

The entrance lodges to Trentham Gardens to the north of the Sutherland monument were built in about 1775 , thought to be by Joseph Pickford of Derby, and were built for the 2nd Earl Gower. They mark the C18 approach to Trentham Hall which ran along the west side of the lake. Maps from the C19 show that a road ran beyond the entrance lodges down to the southern edge of the park to Tittensor, but this has now been rerouted.

Wings have been added to either side of the entrance lodges, possibly at different times since the mid C19 as the designs differ slightly.

The Monument Lodges, gatepiers and screen, of 1775 by Joseph Pickford, are listed at Grade II for the following principal reasons:

* for their sophisticated and imposing Palladian design by Joseph Pickford;
* as examples of a pair of early-C19 lodges which marked the entrance to a grand country estate;
* for their good degree of survival.

* for their association with the Trentham Estate and the Dukes of Sutherland.

* with the Grade II*-Registered Trentham Gardens other listed buildings on the estate.