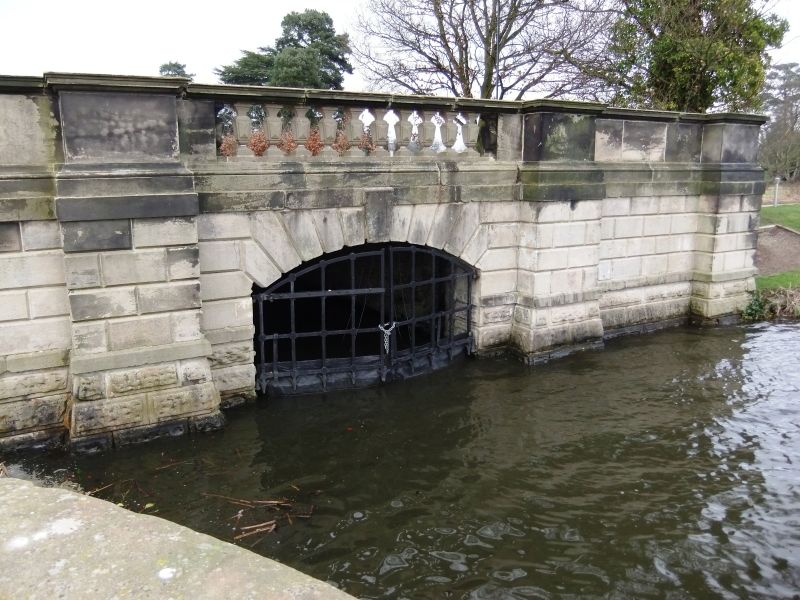 Church of England Parish: Trentham St Mary and All Saints

Retaining wall, balustrade, steps and boathouse, 1833 to 1842, part of Charles Barry’s remodelling of Trentham Hall and Gardens for the 2nd Duke of Sutherland.

Retaining wall, balustrade, steps and boathouse, 1833 to 1842, part of Charles Barry’s remodelling of Trentham Hall and Gardens for the 2nd Duke of Sutherland.

MATERIALS: the wall and balustrade are limestone ashlar. Some of the urns and balusters have been replaced, either with concrete or Hollingworth stone.

PLAN: the wall encloses the southern end of the parterre garden, separating it from the lake to the south. It is a linear feature, running east-west, with a central set of semi-circular steps down to the water. At the west end is a short return wall running north, with a seat. At the east end another return wall has a semi-circular projection overlooking the opening to the boathouse, which is recessed beneath the parterre terrace to the north-east.

DESCRIPTION: the retaining wall is faced with rusticated ashlar. Above, there is a vase balustrade with a moulded base and rail, articulated by squat square pillars with fielded-panelled sides; these are topped with wide urns, restored in around 2004. At the angles of the walls are square piers with moulded caps. At the centre of the wall, in line with the north-south axis of the parterre garden, there is a break and a semi-circular projection with a set of wide, shallow steps leading down to the water’s edge. A statue of Perseus (listed at Grade II*) stands at this point.

At the eastern end, the balustrade leading north is broken by a semi-circular stone seat. To the north-east is a short length of walling built up to a higher level, within which is the opening to the boathouse; this is a wide segmental arch with a keystone, and it has metal gates.

Trentham Hall and gardens were established on the site of a C12 Augustinian priory when, in 1540, after the priory was dissolved, it was purchased by wool merchant James Leveson. Under the ownership of the Leveson-Gower family, the house and grounds were redesigned multiple times. From 1630 to 1639 a new house was built for Sir Richard Leveson, in 1707 it was redesigned by William Smith of Warwick, and it was redesigned again between 1737 and 1738 by Francis Smith of Warwick. In the mid-C18, at the same time as Capability Brown enlarged the lake, the house was enlarged by Henry Holland from nine to fifteen bays, and in the early C19 Charles Heathcote Tatham added the east and west wings to its south elevation.
In 1833, following the death of George Granville Leveson-Gower, the 1st Duke of Sutherland, the estate was inherited by his eldest son, the 2nd Duke of Sutherland, and his wife, Harriet (née Howard). In the same year they commissioned the architect Sir Charles Barry to redesign Trentham Hall, which included the addition of the grand entrance at the west end, the addition of a belvedere tower over the old kitchen, the building of an orangery, sculpture gallery and clock tower, and the rebuilding of the stables and service quarters. The design of the Italianate formal gardens is also attributed to Barry, formed of two shallow terraces leading down to the lake with parterres and balustrading, statues, urns, pavilions and fountains.

Trentham Hall was largely demolished from 1910 to 1912 but remains of its entrance and conservatory, orangery and sculpture gallery and stable block survive. The entrance lodges to Trentham were relocated from the west entrance to the present position on Stoke Road in the 1920s, when the site became a public pleasure garden. The various structures built for entertainment in the C20, such as the tennis courts, ballroom and open-air swimming pool have since been demolished. The estate is now operated as a commercial leisure attraction.

The retaining wall, balustrade, steps and boathouse separate Barry’s parterre garden from the lake as part of the design executed between 1833 and 1842 for the 2nd Duke of Sutherland. The boathouse was built to store gondolas for use on the lake and to reach its islands.

Sir Charles Barry (1795-1860) was a leading architect in the early to mid-C19. Best-known for his design of the Houses of Parliament with AWN Pugin, he was also an influential country house architect, and a passionate architectural gardener, popularising the Italianate style.

The retaining wall, balustrade, steps and boathouse at Trentham Gardens are listed at Grade II for the following principal reasons:

* an accomplished illustration of the mid-C19 fashions for the Italianate style in garden design, and forming a grand boundary between the formal garden terraces and the lake.

* the structure is an integral part of Barry’s C19 designed landscape, and has a strong relationship to other listed features, particularly to Perseus, who stands at its central point.