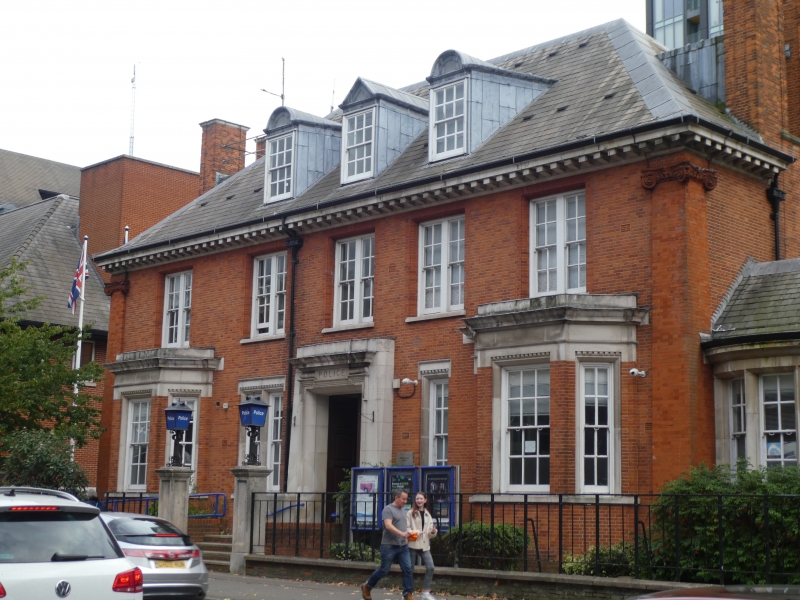 PLAN: the police station faces north on to Carshalton Road and is broadly E-shaped in plan. Centrally there is a public entrance which leads to the victim interview room and late-C20 reception desk. Behind this to the south there is a central rear wing which houses the former charging desk and cell block. To the west end there is the former court room, which forms the western wing. To the east end there is an office section, and behind this to the south, there is a 1998 extension. Two sets of stairs located to the west and east ends give access to the first and second floors where there are offices, some of which were formerly domestic accommodation.

EXTERIOR: the principal elevation of the building consists of five symmetrical bays over two storeys with attics, and an asymmetrical single-storey section to the west. All bays are constructed of red brick with Portland stone dressings and detailing. The main elevations have Ionic pilasters at the corners, and have a deep modillion eaves cornice. The hipped slate roof carries three central dormers, two with segmental roofs, and a central pedimented example. The ground-floor has two canted bays at each end, with narrow paired sash windows in between. All the ground-floor windows have stone cornices, with dentils above each sash. All sashes on the principal elevations are horned and multi-paned; the bays have six over six panes, and the paired examples are four over four. The central stone entrance has a moulded stone door-case which employs free-flowing curves and triangular scallops to enliven its classical form; the freedom of the curves are typical of Butler's best work. Above there is a stepped cornice inscribed with the word 'POLICE'. This entrance has a pair of timber panelled doors, with small glazed panes at the top, which are approached via three steps with side piers. The piers are stone with inset panels, and mounted on them are ornate iron filigree bases supporting traditional dark blue police lanterns, which have circular metal caps.

The single-storey western section (former courthouse) is made up of three bays, and has a timber door to the main entrance (now disused), set in a moulded stone doorcase in a simplified classical style, and attached to a stone bow window, with four over four sashes. Towards the western end there is a tall pedimented gable with a high-set oculus window in a stone surround which has pronounced keystones. On the western return of the former courthouse, the fenestration at ground-floor level includes oversized square sashes and a double-height sash window. The upper section of the western elevation of the main building above, is surmounted by a pair of tall brick chimney stacks. Fenestration to the rear of the building consists of an irregular pattern of sashes, with some replacement metal casements.

The eastern elevation of the station is formed of tall and narrow sash windows, with four over four sashes. To the ground floor there is a short projecting brick chimney stack, surmounted with a decorative chamfered moulding. Above, there are three tall chimney stacks set into the hipped roof.

The rear central wing is more plain and of three-storeys, and four bays in length. The fenestration consists predominantly of paired sashes, but at ground floor level the former cells are lit by rectangular windows which have stone cills, and multi-paned glazing separated by iron bars. There are three external chimney stacks, with two being paired, and the one to the rear elevation being stepped and originating at first-floor level. There are two bays to the rear elevation, with one set of paired-sashes to the third-floor.

The single-storey south-eastern extension of 1998 is functional in design and appearance. It abuts the original station via a connecting corridor.

INTERIOR: all rooms are functional, with cornices where fitted, now hidden under false ceilings. There are no visible chimneypieces or fireplaces. There is a timber panelled vestibule (victim interview room) off the main entrance which has high-level multi-paned glazed lights, designed to borrow light from the main reception area. The former cells retain vestigial fittings including bell-pushes, door hinges, a toilet stall, and a timber bench. The stairs are both open-well. To the east, the domestic staircase is made of timber, and has a closed string, painted stick balusters, and a varnished square-section hand-rail. The operational stairs to the west have concrete treads, and a geometrical wrought-iron handrail set into a low snaking concrete wall. The former court room is double-height (although now fitted with a suspended ceiling). Within this area there is a former door opening (now sealed) with an eared timber architrave. At the south-eastern corner of the building, two former external multi-paned oculus windows in flush brick surrounds, and a round-headed timber door (also with an oculus window), now face into a connecting corridor to the 1998 extension.

Sutton police station is located in Carshalton Road in the centre of Sutton. Historically the former manor of Sutton belonged to Chertsey Abbey from before the Norman conquest to the Dissolution, when it passed to a succession of mostly non-resident owners. In the C18 the village became a coaching stop on the route to the races in Epsom and then Brighton, and by 1800 it was a small village sprawling up the hill from the common (now the Green) to the Cock Cross Roads. The arrival of the Sutton to Epsom railway in 1847, the Epsom Downs line (1865), and the more direct line to London via Mitcham Junction (1868), led to rapid change. Middle class development took place at Benhill and in the area around the railway station, while Newtown, east of the High Street, was more working class. The High Street shops developed quite rapidly, probably largely in the 1870s and 1880s, and by 1900 Sutton was a small commuter town in the countryside beyond London. In the 1920s and 1930s the wider area was subject to more suburban development.

Sutton was brought within the Metropolitan Police District in 1840, and a small lock-up building was provided for the Sutton police officers at the bottom of the High Street (demolished around 1927). The first police station was built in 1854 at 84 Sutton High Street, and the operational compliment was two sergeants, eleven constables, and one horse.

The new station was designed by John Dixon Butler (1861–1920), Surveyor and Architect to the Metropolitan Police, who during his prolific career, designed over 200 public buildings. By the late C19 a formula had been established for police station design based on a mixture of police accommodation and cells, with separate access for the police, prisoners, and the public. For the first time, thought was also given to the comfort of prisoners. Sutton police station provided operational accommodation for the Sutton police officers, two married-quarters, and rooms for 10 unmarried men, who were charged one shilling per week. The western wing of the new station was originally laid out as a court room, but was later converted to a writing-up room for the police officers. The station was refurbished in 1936, and by 1963 it was designated as a sub-divisional station of Z-Division. In 1998 the police station housed 180 staff and it was extended to the south-east to relieve overcrowding. An earlier yard was covered over and subsidiary outbuildings to the south-east were demolished and replaced with an extension providing dog-kennels, canteen, office space, and a billiards room.

In the later C20, replacement metal casement windows were added to the rear of the courtroom section, which was also extended to the east. Store rooms were created from the former cells, along with an extension and a new double-door opening to the rear. The original charge desk is now a reception for the stores department (2017), and a late-C20 glazed partition has been added to the main reception. The cellar level has been closed to access. Outside the courtroom to the south, the original brick boundary wall and entrance gate have been removed. Here, the railings and hand-rails are late-C20 replacements.

Sutton police station including its gate piers and police lamps, 1908, by John Dixon Butler, is listed at Grade II, for the following principal reasons:

* an unusually elaborate design for a combined suburban police station and magistrates court by John Dixon Butler, one of the most accomplished of the Metropolitan police surveyors;

* the stately façade, ebullient stone dressings, and the quality of the craftsmanship distinguish this building from many contemporary suburban police stations;

* a legible plan form; which included accommodation for officers, consideration for those in custody, safety of the public, and a courtroom;

* survival of the entrance gate piers and their iconic blue police lamps.