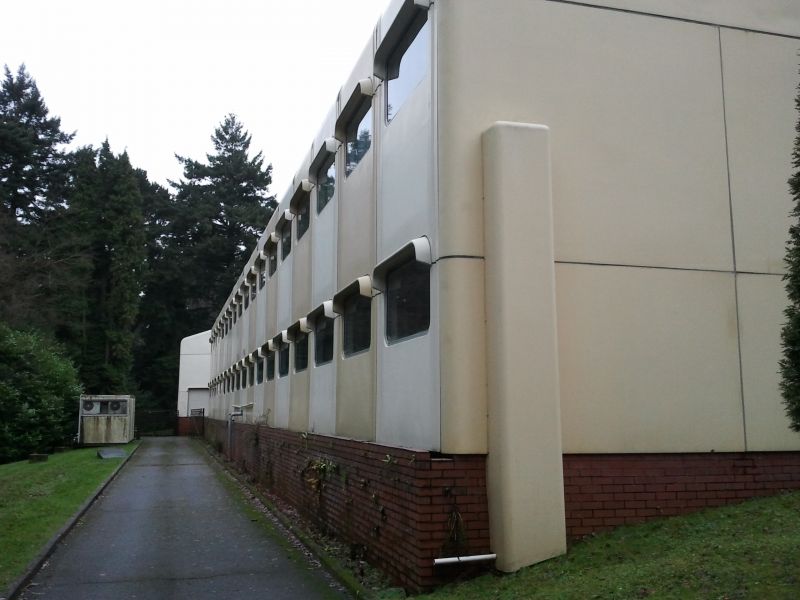 Country house, now conference centre. Dated 1901 over entrance, with later Edwardian additions, by E J May, altered 1971-2 by Edward Cullinan and extended 1971-2 by James Stirling, both for the Olivetti International Education Centre.
The May building of brick over ground floor of random stone with tile-hanging and some timber work; tiled roof. A large house of irregular plan with a crescent-shaped entrance front, and two side wings to the right forming a courtyard with an attached former stable range. Two storeys and attics, with dormers by Cullinan. End and centre bays project under gables (the central bay narrower) with attic and first floors oversailing. At left and centre these are half-timbered, at right tile-hung. Large casement windows, some with mullions and leading. First floor left and centre has canted oriels with pargetting beneath. Wide central open wood porch. Tall tiled roof with deep eaves soffit has dormers by Cullinan inserted. South-west (garden) front of similar five bay design. Inside, a large drawing room with decorative plaster ceiling and glazed tiles, found also in the entrance hall. Bar with decorative ceiling. Ground floor rooms behind garden front now dining rooms, one with large and elaborate painted plaster fireplace. Behind, new reception area, hall and staircases inserted by Cullinan into former service yard and linking stables. These and the upper floors converted by him into classrooms and study bedrooms. From reception area extends a glazed link to classroom wing by James Stirling. Glass Reinforced Polyester and glass, the former in shades of ochre and cream, with only a curve denoting the change from walls to roof and formed of identical units each incorporating a rectangular window. Some timber panels over doors. Two storeys, but set much lower in the landscape on sloping site than May's house. The glass 'conservatory' is slightly concave in section and houses ramps, which lead up or down to wings of classrooms, and down to level lecture theatre set in angle of right-hand wing. The conservatory and corridors painted Stirling's favourite lime green, with full-height vertical radiators also lime green, set against lilac frame. Spiral staircase at end. Lecture room divisable into four by full-height partitions, and with curved timber screen to divide it from central hallway, from which it is separated by timber steps to continue a division when the screen is opened. The classrooms are divisible by timber partitioning. The upper floor has clerestorey glazing on the inner face and rooflights to the spinal corridor. Staircases at the end of each wing, leading to exit doors.
This building holds an important place in the career of James Stirling (1926-92) as it marks a shift in his career away from the heavy, Brutalist brick aesthetic of his early work to a more classically-inspired post-modern tradition which is international in flavour. It is also important in the development of GRP as a sophisticated building material in England, for it is the major building by a major architect to be built in GRP in Britain. The principal spaces are richly designed, and survive virtually unaltered.