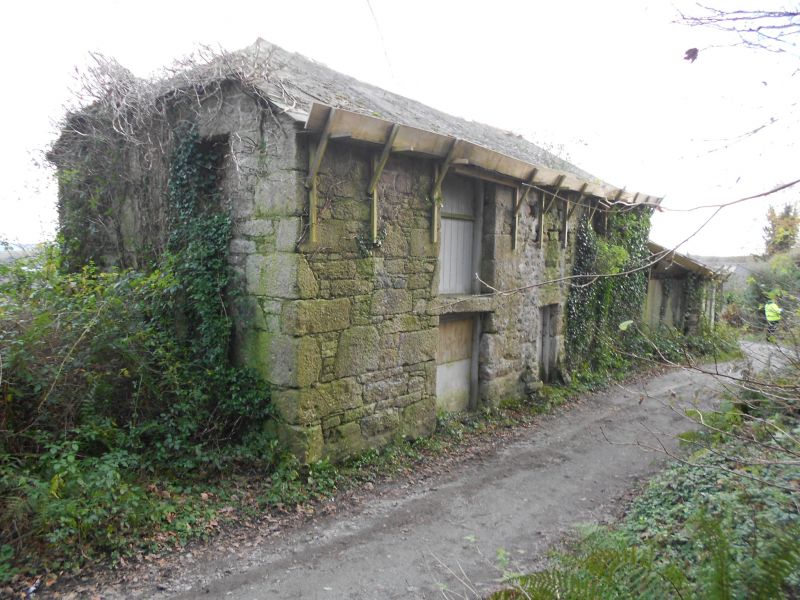 Former barn with later horse-engine house. C17, remodelled early/mid C19, horse-engine house added later C19. Granite rubble with some cob; grouted ragstate 1-plan roof plus polygonal roof over horse-engine house.
PLAN: Cl 7 walls survive as a U-shaped plan, part of which was converted and extended as an L- shaped barn with a grist mill in the small part of the L. This mill was operated from a waterwheel downhill at a short distance, of which the wheel pit survives, and was presumably linked by flat rods. The rest of the Cl7 structure survives as a lean-to in part of the angle, then, in the C19 an extra bay was added to the left of the barn incorporating a threshing floor with stone steps at the rear. The horse-engine house was added at the central part of the Cl 7 wall but aligned with the barn front. Later, the horse-engine house was subdivided by the insertion of a cross wall creating a through passage between its original doorways. This change necessitated the conversion of one of the windows to a doorway and later another, wider doorway was cut through next to the original front doorway.
EXTERIOR: 2 storeys. Of the original exterior, now partly enclosed since the addition of the horse-engine house, are 2 chamfered granite doorways and some small chamfered and unchamfered granite windows with monolithic jambs. The front of the barn has C19 remodelled window openings and a wide threshing floading doorway over a doorway at the beginning of the Cl9 extension on the left, another doorway to ground-floor centre and there are some blocked pigeon holes under the eaves. The horse-engine house has 2 unaltered window openings now fitted with copies of the original windows with vertical glazing bars and random panes. The door between the windows is mid-late C19. Many of the other openings have repaired original doors or doors and windows based on fragments of the old ones that had survived.
INTERIOR: C19 floor joists and roof structure.
This building contains the remains of a C17 farm building, rare in Cornwall. It is also an interesting example of a Cl9 barn with an integral mill with an unusual former power source and a good horse-engine house added.