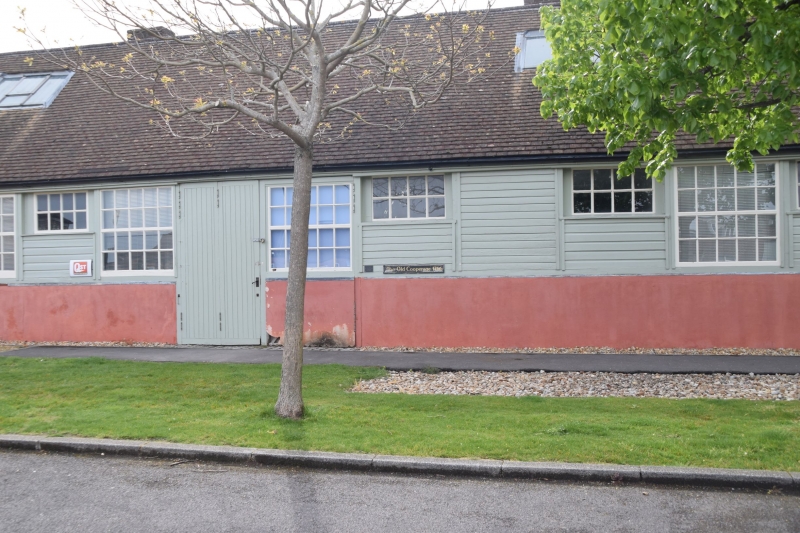 EXTERIOR: A long range to the W side of the former cooper's square; sections separated by a fire wall rising through the roof, each with a boarded door and variable distribution of windows and boarded panels; the windows have 10/10-pane lights. The section 3 from the left has 2 small dormers of 6 and 2 lights, front and rear. Window-less rear, middle section has 2 large external stacks.

INTERIOR: The section with the stacks has wide hearths from former forge. Timber trusses.

HISTORY: Used for making barrels for the navy's rum issue until it was discontinued in 1970. The cooperage was built between 1765 and 1766 adjacent to the Weevil Brewery, which had been constructed two years before. Forms one side of the cooper's square with the S and E ranges (qv), in which barrels were stacked. Clarence is one of the first large industrial food processing plants in the country, and indicative of the considerable scale of the Navy's victualling operation, on an important site overlooking the river.

Built in 1766 as 6 coopers' shops each containing 2 fire hearths and terminated at each end by sheds for iron and wood hoops (these two sheds, and one of the coopers' shops, are the only cooperage buildings to have been demolished). This range incorporates a section of the original brewery wall of 1764. By 1830 the coopers' shops were mostly used for the storage of casks.

(Source: D Evans. 'The Evolution of the Cooperage and Rumstore complexes at RCY. A Study carried out for Hampshire County Council, April 2000)