A Grade II Listed Building in Wingrove, Newcastle upon Tyne 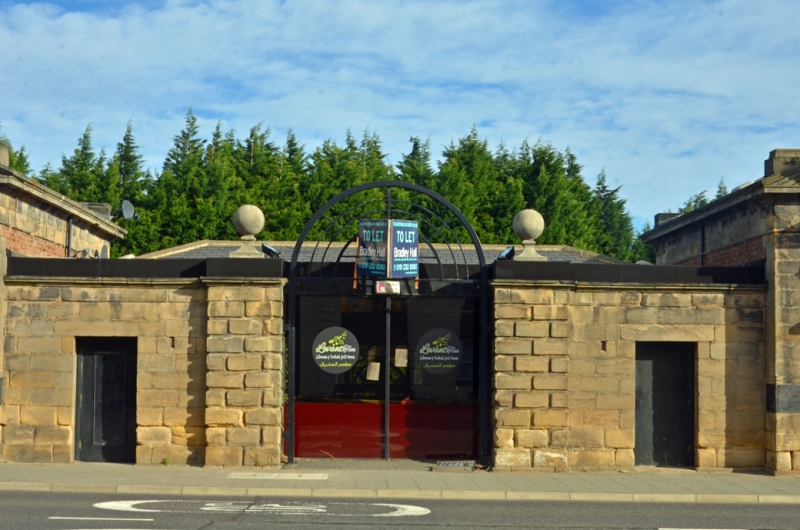 Find accommodation in
Newcastle upon Tyne

Former barrack guard house and office; restaurant, now disused. 1804-06, by James Wyatt, Surveyor General to the Ordnance Board, restaurant 1970-90. Brown sandstone ashlar guard house with ashlar gable stacks, rear brick block, with slate hipped and gabled roof. Single-depth plan with offices to the left. EXTERIOR: Single storey; windowless street front, 9-window rear office elevation. Guard house gable has a coped pediment with raised corner blocks, a central raised round-headed niche in a blind recess beneath an overhanging blind oriel on moulded stone brackets, rising to the top of the pediment, and containing 3 rifle slots beneath a blind lunette; 4 courses from the ground the quoins are replaced by wide cast-iron blocks. To the right a coped wall with flat-headed opening and rusticated pier to former barracks entrance. Brick block has flat-headed openings, boarded at time of survey (1994). INTERIOR: Not inspected. SUBSIDIARY FEATURES: Attached former barracks wall with flat coping, forms the front wall to the office, and extends approximately 400 metres to the south-east, north-east, and north-west, enclosing the south-east end of the former barracks. HISTORY: The Ordnance Board were responsible for Artillery barracks during the Napoleonic War. One of a pair of striking and unusual guard houses to Fenham Artillery Barracks, connected by a late C20 glazed archway to the gateway (not of special interest), and part of a group with the former officers' and sergeants' messes (qqv). The Barracks wall attached to Fenham Barracks East Lodge was listed on 30/03/87. (Archaeologia Aeliana, 5th series: Breihan J: Army Barracks in the NE in the Era of the French Revolution: 1990-: 171).