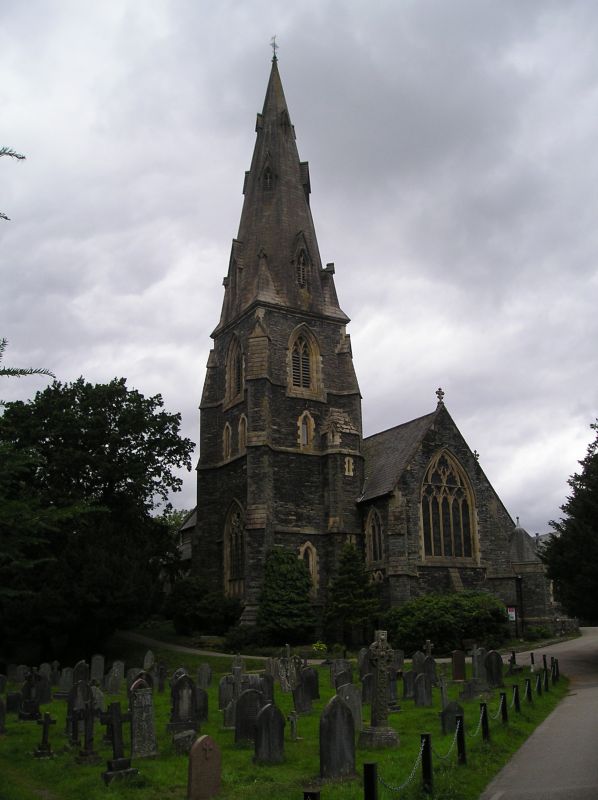 II*
An Anglican church built 1850-54 in the Early Gothic Decorated style to a design by Sir George Gilbert Scott.

EXTERIOR: The chancel has diagonal buttresses and a five-light east window with tracery and a central buttress beneath. Adjacent is a single-storey canted vestry with pairs of trefoil-headed windows, a coped parapet and an octagonal pyramid roof topped with a ball finial. The north-east chapel is tall and is roofed on a west - east axis. It has buttresses between which are pairs of two-light windows with pairs of small, round-headed vestry windows beneath. The north and south aisles are buttressed between which are pairs and triplets of trefoil-headed lancets with trefoil clerestory windows high in the nave walls above. The porches have wrought iron gates, squat clasping buttresses and pointed-arched door surrounds beneath pitched roofs. The west end has a central four-light window flanked by buttresses and aisles with three-light windows and diagonal buttresses. There is an impressive four-stage south-east tower with a projecting south-east stair turret. The tower has diagonal buttresses terminating in gables, a blocked large four-light south window with Decorated-style tracery including a star motif, trefoil-headed lancets, and two-light belfry windows with Decorated-style tracery. A tall spire with three tiers of lucarnes projects upwards from the tower and is topped by a weather vane. The church roof has seven gables surmounted by crosses all of different design

INTERIOR: There is a double-chamfered chancel arch on responds with clustered shafts. The east window has stained glass depicting the Four Evangelist and St Paul by John Scott & Son. The chancel roof is a keeled wagon with horizontal boards behind, divided into panels by moulded ribs. The reredos was a gift of Margaret Freeman in memory of her family. It was made by Bridgeman of Litchfield to a design by Paley & Austin and dedicated in 1895. It is executed in alabaster and mosaic with a centrally-placed white marble cross and has figures of four Celtic saints - Oswald, Aiden, Columba and Kentigern - in crocketted ogee niches. The chancel has marble and tile flooring, a low stone chancel screen with a pierced quatrefoil frieze, and wrought iron and oak sanctuary rails of 1897. There are unusually elaborate choir stalls of 1899 by Bridgeman; the ends have round finials with flamboyant tracery, blind traceried panels and carved figures, while the frontals are decorated with carved figures under ogee arches. The choir vestry is accessed from the chancel; it has an octagonal timber roof.
The stone pulpit is polygonal with ogee-arched sunk panels and sunk panels with shafts, all on a stone base. There is a brass lectern in the form of an eagle at the front of the nave. The north east Lady Chapel, also known as the Wordsworth Chapel, has a two-bay arcade from the chancel and a double-chamfered arch from the north aisle. It has an asymmetrical collar scissor-braced roof. The organ chamber in the base of the tower has a double-chamfered arch from the south aisle; it contains an organ of 1898 by Hope-Jones Organ Company of London.
There are five nave arcades to the aisles with alternating octagonal and round piers with moulded capitals and double-chamfered arches. The nave is floored with black and red encaustic tiles with an ornamental iron heating grill down the centre. Nave benches have square-headed ends with a roll moulding and recessed panels. The benches have hinged flap seats attached to the ends. North and south entrances from the porches are similar but the main north entrance has part-glazed panelled timber doors while the south entrance has full-panelled timber doors. The nave has a substantial arched-braced hammerbeam roof on moulded corbels with ashlar pieces and diagonal boarding behind. Stained glass windows are by Wailes, Warrington and Holiday. The west window is of four lights with stained glass by William Warrington. Beneath the window a wall painting of 1944 by Gordon Ransom (of the Royal College of Art)depicting the historic Ambleside Rush-Bearing Ceremony. The font is C19 and has a square stone bowl decorated with crosses in quatrefoils on an octagonal stem with corner shafts with naturalistic foliage capitals. It has a carved oak font cover of 1950. At the west end of the south aisle there is a Gothic Revival monument to Henry Lutwidge, who died in 1861, by J Chapman of Frome. It is a chest decorated with quatrefoils under a cusped ogee arch and flanked by buttresses with pinnacles and a memorial brass in the shape of an anchor of hope. There are numerous other wall monuments throughout the church's interior together with the bowl of a pillar piscine on a later stem and base in the nave.
The eight bells were installed in the tower in 1901 and were cast by Taylor of Littleborough. A clock of 1901 by Potts of Leeds is housed within a glass and timber case in the church tower.

HISTORY: St Mary's Church, Ambleside was built 1850-54 to a design by Sir George Gilbert Scott as a replacement for smaller former parish church of St Anne. A north-east choir vestry was added in 1889 to the designs of Paley & Austin of Lancaster and was built by Newtons of Ambleside. An alabaster and mosaic reredos designed by Paley & Austin and executed by Bridgeman of Lichfield was dedicated in 1895. Two years later the wrought iron and oak sanctuary rails were inserted. In 1899 elaborate choir stalls executed by Bridgeman were installed. The C19 stained glass includes windows by Wailes, Warrington, and Holiday. A wall painting beneath the west window illustrating the annual historic Ambleside Rush-Bearing Ceremony was undertaken in 1944 by Gordon Ransom of the Royal College of Art, while the college was evacuated to Ambleside during World War II. In 1969 a vestry was created beneath the north-east chapel.

REASONS FOR DESIGNATION
St Mary's Church, Ambleside, is designated at Grade II* for the following principal reasons:
* Architectural: as a very good example of the work of Sir George Gilbert Scott, displaying his skill in recreating the church architecture of the High Middle Ages
* Internal decoration: for the high quality of the fixtures in particular the stained glass reredos, and the highly unusual 1940's mural by Gordon Ransom
* Intactness: the church has undergone little alteration and is still a coherent ensemble
* Historic interst: as a testament to the expansion of mid-Victorian Ambleside and its Anglian piety
* Townscape value: for its notable spire, which forms a distinctive feature in the notable landscape setting