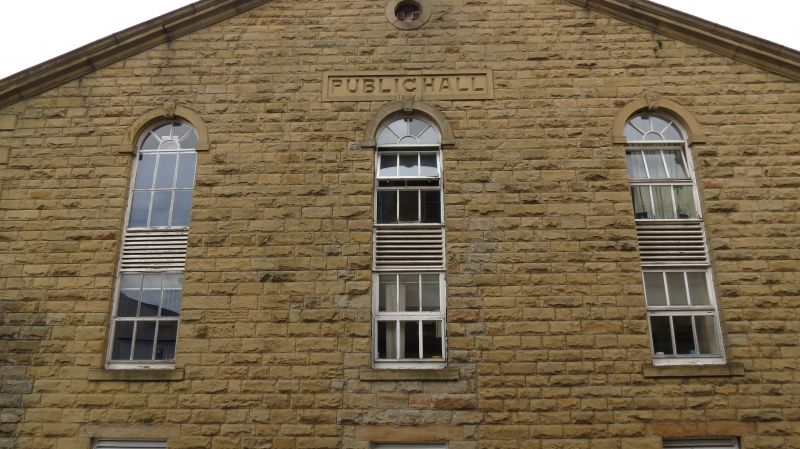 Public hall, used for various purposes including technical
school, now offices. 1862. Built by Lawrence Ashworth for
hire. Rock-faced sandstone with rusticated quoins and
freestone dressings, slate roof. Modified rectangular plan on
corner site, the right-hand end slightly projected.
EXTERIOR: 2 storeys over a basement, 4:1:1 windows, with a
moulded gutter cornice. The 5th bay has a shallow 2-storeyed
pedimented porch containing a wide pilastered doorway at
ground floor with stepped pilasters and a recessed door, a
moulded cornice, a frieze with a sunk panel which has raised
lettering "TECHNICAL SCHOOL", and a large 6-pane window at 1st
floor with an unusual shallow 2-pane overlight. To the left
the 4-window range has a doorway in the centre with pilaster
jambs, plain frieze and moulded cornice, flanked by basement
areas protected by simple iron railings, square-headed windows
at ground floor with plain lintels, and round-headed windows
at 1st floor with raised sills and dressed surrounds including
imposts and keystones. All these windows have altered glazing.
To the right the projected 6th bay has a tall 2-stage window.
The right-hand gable (to Nicholas Street) has 3 louvred
basement windows, 3 tall round-headed windows with heads like
those at the front and restored glazing with restored
radiating glazing bars and wooden-louvred mid-sections; and
over the centre window an oblong panel inscribed "PUBLIC
HALL".
INTERIOR not inspected.
HISTORY: was used as an assembly room, lecture hall, secular
Sunday School, soup kitchen and theatre, until 1868 when it
was bought by the Town Council for use as the town hall until
the present Town Hall in Manchester Road was opened in 1888
(qv).
Forms group with Nos 18-24 Nicholas Street (qv) on the corner.