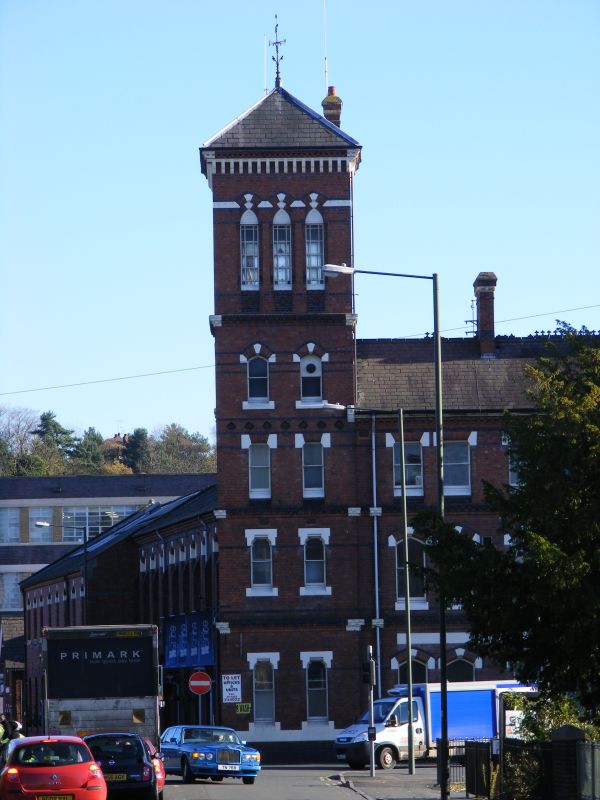 Carpet factory. 1869; by T.D. Baker, for William Green. Blue brick with white Stourbridge brick dressings. Slate hipped roof. PLAN: L-shaped plan front block originally containing offices, showrooms, winding room and warehousing etc, including wing to rear NE. The weaving sheds behind are not included. Classical style. EXTERIOR: 3 storeys. Symmetrical 2:2:2:3:2:2:2 bay north west front, the wider centre bay pedimented, the bays divided by rusticated white brick pilasters. Enriched white brick corbelled eaves cornice and stringcourses at floor levels and moulded brick plinth. Each bay has pair of round-headed windows with white brick arches and imposts and multi-pane cast-iron window frames. The centre opening on each floor in the centre bay is a doorway and in the pediment above there is an oculus. The carriageway on the left has an RSJ, probably replacing an arch. INTERIOR: Staircase removed. Floors supported on Phillips`s patent wrought-iron girders. NOTE: William Green, a coal merchant, began carpet making in 1859 and rented space at Stour Vale Mills [qv], before building his own factory, which was then known as New Road Mills. SOURCE: Goff, A.D. The Development of the Carpet Works of Kidderminster 1735-1939; dissertation, University of Birmingham [Ironbridge Institute].