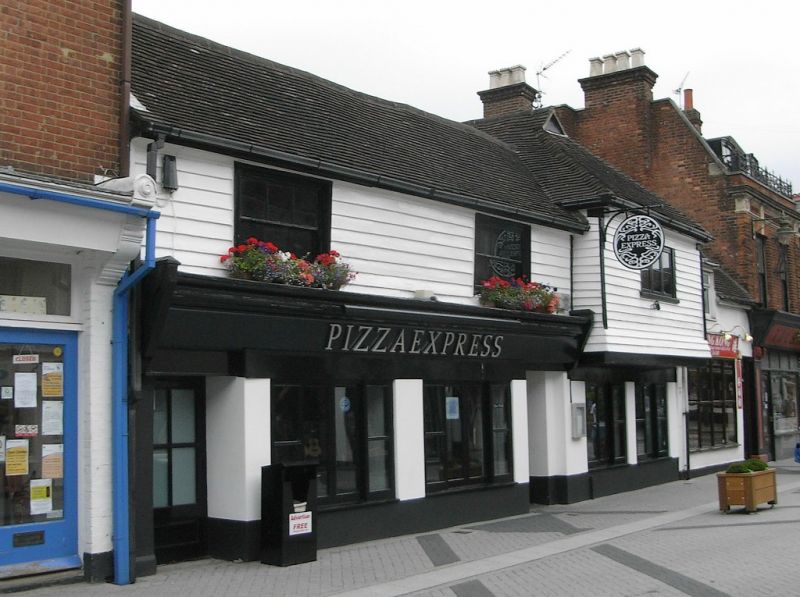 Two shops, originally house. C15 two bays of open hall with two bay crosswing, extended to rear and west in C17, altered and extended in early to mid C18, further extended and altered in late C18 and early C20 and renovated in late C20. Timberframed building, clad in weatherboarding, apart from no 25 which is stuccoed, and renewed tiled roof with gablet to no 23. Nos 19-21 are two storeys, no 25 one storey and attics; 4 windows. Nos 19 and 21 have early C19 six-pane sashes with horns, no 23 C20 casement and no 25 a C20 flat-roofed dormer and large 8-pane shopfront and door. Nos 19-23 have late C20 shopfront with cement rendered piers and large panes. The interior of no 25 retains two C15 bays of an open hall with curved and chamfered tie beam and curved braces. Sooted roof reported. No 23 has C15 crosswing, originally with 2 rooms on ground floor and single chamber above served by garderobe, but the garderobe was lost when the C17 kitchen wing was built to the rear. Blocked doorcase into no 25 with pintle hinges. First floor has passing braces, arch braces and plain crownpost with two way head brace to collar purlin. Wattle and daub panel with wall painting of geometrical white and red designs on one side and a black design on the other. Ground floor has deep chamfered beams with lambs tongue stops and groove evidence for a former stave partition.. C17 kitchen extension to rear has painted stone base and square framed panels above with brick infill. Nos 19-21 have clasped side purlin and collar construction roof, probably the original C17 roof heightened in the C18. Probably there was originally a service bay to the C15 hall-house on the east.[ Barbara and David Martin "A brief archaeological survey of 19,21,23 East Street Horsham" 1997. Annabelle Hughes Horsham Houses" 1986 p100 and 135.]